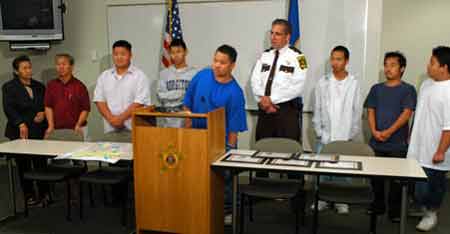 Kong Vang, at the podium, recounts his third cast with an eight pound test fishing line and lure that finally snagged the 105 pound Tou Cher Yang (standing to the left of Vang).

The five Fishermen who rescued Tou Ger Yang, were honored by Sheriff Fletcher, at an Awards Ceremony at the Ramsey County Law Enforcement Center. For their heroic lifesaving efforts, Sheriff Fletcher awarded them with the Sheriff’s Department Lifesaving and Heroism Award.

“This is a remarkable story,” Sheriff Fletcher said as he introduced the young men.

On July 10, 2006, at approximately 9:00 p.m., the six young men were fishing at Gervais Mill Pond at 2777 Edgerton in Little Canada. One of the youth reportedly found a note on one of their vehicles in the parking lot that read: “Do not throw garbage into the ponds or park. I seen you off the dock I have your license plate numbers. I can see you when you can’t see me. I will report you to the police. Watchdog.”

The young men noticed that some garbage was in the water and they decided to try to retrieve it by casting fishing lines at the garbage. One of the parties, Tou Ger Yang jumped into the pond and started swimming for some garbage. Yang started to struggle and screamed for help. He went under several times and eventually succumbed.

Desperate to save their friend, but not qualified to conduct a swimming rescue, one of the young men, Kong Vang, began casting fishing line and lure out over Tou Ger Yang’s lifeless body.

Remarkably, the line snagged onto the unconscious body of Tou Ger Yang. The young men were able to pull him closer to the shore. One of them, Xue Lao Vang, jumped into the shallow water and pulled Yang’s body to the shore.

As he handed out the awards, Sheriff Fletcher said, “You guys are heroes.”

Ramsey County Deputy Sheriffs arrived and administered oxygen and additional medical care. Yang was transported to Regions Hospital. He was later moved to Gillette Children’s hospital and was release home on July 14. He is doing remarkably well – considering that he nearly died.

Speaking at the Awards Ceremony, Tou Ger Vang said that he has recovered enough to go fishing again. “I guess it wasn’t my time to go yet,” he said.

Cher Vang said he felt panicked and shocked but knew something had to be done. “He has to survive,” he recalled thinking. “I cannot lose him under my watch.”

Their names will also be submitted to the American Red Cross for additional recognition.