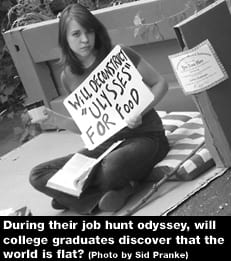 A college degree used to be an automatic ticket to at least lower middle class. You were qualified. You had distinguished yourself. You felt wanted. These days, post-collegiate life has become a fierce struggle just to earn enough money to pay for a tiny apartment in a safe neighborhood, a little gas to get around, insurance, some organic food, utilities and a warm winter coat.

Is globalization the culprit? With more and more jobs being outsourced every day, many college grads end up in the service industry just to get by. They claim that it’s temporary, that they’re just (barely) paying the bills until something better comes along. But listen closely to the tinge of fear in their voice when they tell you that—they’re worried that “something better” won’t come by at all.

Jennifer Kaysen Rogers, an employer relations specialist for the University of St. Thomas in St. Paul, paints a more optimistic picture as she cites St. Thomas’ 2005 post-graduate survey results. She points out that, with a 38 percent response rate, 96 percent of graduates were “situated” in their employment. Rogers defines a “situated” graduate as one who is employed, volunteering, in the military, in grad school, or, essentially, “doing what they want to be doing.”

“A traditional liberal arts major isn’t going to come out of college making as much as an engineer,” concedes Rogers, but she also says that the job market has opened up in the last couple of years. “The economy has rebounded, and employers are targeting new college grads or higher for recruiting because we have baby boomers retiring,” says Rogers.

Employers now hire and develop young graduates to take the place of aging management. Rogers also points out that “in the last year or two, the value of a liberal arts education has increased.” So why does it feel so hard out there for liberal arts graduates?

“The problem is that, now, the emphasis is placed on finding an enjoyable job rather than a well-paying one,” says Alexander Theoharides, a senior English major at Skidmore College in New York. Theoharides is a literature buff that wants to teach English at the collegiate level and plans to pursue a graduate degree with that end in mind. “I feel like I need the graduate degree to separate myself from other liberal arts majors,” says Theoharides. What happened to the days when an undergraduate degree was enough to separate oneself from the masses?

This is the dilemma they face: millions of young people, similar in so many ways, are roaming the planet looking for a limited number of jobs, and only a small percentage of those jobs actually provide them with a comfortable lifestyle. Colleges have become trade schools, where, rather than receiving a broad liberal arts education (learning a lot about a lot), they become intensely specialized one-trick ponies who know a lot about very little. They’re forced to choose a path at the tender age of 18, and aren’t given the skills to deviate from it when flexibility demands that they do so.

Many are leaving the nest later and later, either unable to find a living wage with their degree or saving up what they do make to invest in tiny postage-stamp-sized pieces of real estate. In most cases, the choice to live at home is not happily made. Living with Mom and Dad for longer than is deemed acceptable by society instills a sense of defeat in many 20-somethings.

Let’s examine the standard they are so desperately trying to live up to: their grandparents. Taught resourcefulness by the memories of FDR and WWII, these men and women found a solid job, stuck to it, provided for themselves and their children in a generally comfortable (but not excessive) manner, and sometimes managed to save up a little to help their grandkids out with college. Back then, however, college was seen as a chance at a better life. Those grandkids, however, will probably have to struggle just as much, if not more, than Nana and Papa.

“Because our grandparents have a history of success, it’s important for us to pursue that as well. But, it’s also important to find a meaningful job, so it’ll be harder for us to be as successful as they were,” says Theoharides.

Young people today (with few, privileged exceptions) have both the skills and the motivation; they just don’t have the job. Anyone who doesn’t have a driving passion for business, finance or economics (or can’t stomach the more brutal aspects of a globalist capitalist economy), doesn’t want to spend their life in a job they hate, or isn’t unbelievably lucky will almost certainly have a hard time of it. So keep this in mind when registering for your college courses: While “ENG 406: Advanced Study of Post-colonial Literature” may sound tempting, don’t dismiss “PL 101: Introduction to Plumbing.”