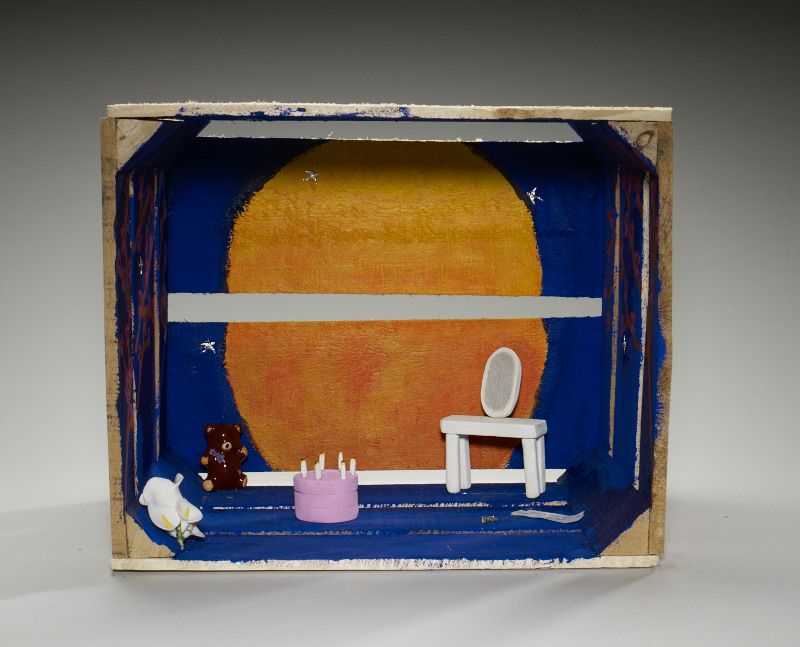 A unique partnership among the Minneapolis Institute of Arts (MIA) and several schools in the Twin Cities and greater Minnesota that have high Spanish speaking populations offers a glimpse not only of the artistic capacity of some of these students, but of their ability to express emotion and honor those that are passed in a respectful, thoughtful way. Now in its fifth year, The Young People’s Ofrenda Project showcases student work within the Mexican tradition of Dia de los Muertos, where students create ofrendas (or shrines) honoring people who have died.

While some kids honor famous rock musicians or sports stars or other celebrities (one ofrenda is dedicated to the drummer from KISS, for example), others will honor a grandparent or a parent, or even a friend who has died. “The diversity of impact on young people is really evident in this project,” said curator Joe Horse Capture.

Horse Capture conceived of the project in 2008, and it started out as a partnership with El Colegio, a charter school in Minneapolis that serves students in English and Spanish. In 2011, the project expanded to include Austin High School (in Austin, Minnesota), Thomas Edison High School, and Humboldt Secondary School.

Horse Capture says the project works on a number of levels. It celebrates diversity, shows another culture’s tradition that often isn’t shown in an art museum, and offers a voice for youth. Expanding the program to four schools was a way to broaden the diversity of voices.  All of the schools have a high Spanish speaking population. The Mexican tradition of creating shrines serves as a vehicle for the students to express themselves through a creative process. “It’s also a great way to diversify our audience,” he said.

Each school is given 30 crates by the MIA (they can purchase more if they please) and then choose 15 to display in the museum. Horse Capture said he prefers to let the schools choose the work internally, rather than him picking which work to display. “If it’s me, it comes across as judgment,” he said.

The schools often will also display all of the ofrendas at the school. For example, Humboldt displays the ofrendas in their library, and El Colegio participates in a large Day of the Dead Celebration, where they are displayed.

The ofrendas are compelling both for the artistry that some of the students display, as well as for the poignant expression of feeling. The students clearly were very thoughtful in what they chose to include in the ofrendas. For example, a young woman named Kenya, from Edison High School, made the choice of decorating her ofrenda dedicated to her Grandmother with a curtain, because she has a memory of her grandmother opening the curtains every morning. Another young woman from Edison named Aubria included objects, artfully placed with a keen eye for design in the ofrenda, that were linked to certain memories of her great-grandmother, such as playing cards fanned and propped up, and dominoes arranged on the floor.

In their description paragraphs, which the students had to write in both Spanish and English, some of the students wrote about how they got to know a passed away family member better through the project.

Angelica, from Austin High School, included pretty shoes and other objects such as a spool of thread and miniature antiques that showed her Grandma’s interests. “I actually did get to know her a lot better due to this amazing project,” she wrote in her description.

Other ofrendas showcase the artistry of these young artists. For example, Ana, from Austin High School, created a beautiful ofrenda with a bright orange moon in honor of her Aunt Eliza, who committed suicide as a teenager. Christopher, from Humboldt High School, created a gorgeous image of a skeleton reaching for the sky in his ofrenda dedicated to Sean Taylor.

Read Patricia M. Guerrero’s essay about the Day of the Dead and Jay Gabler’s review of Rembrandt in America at the MIA.