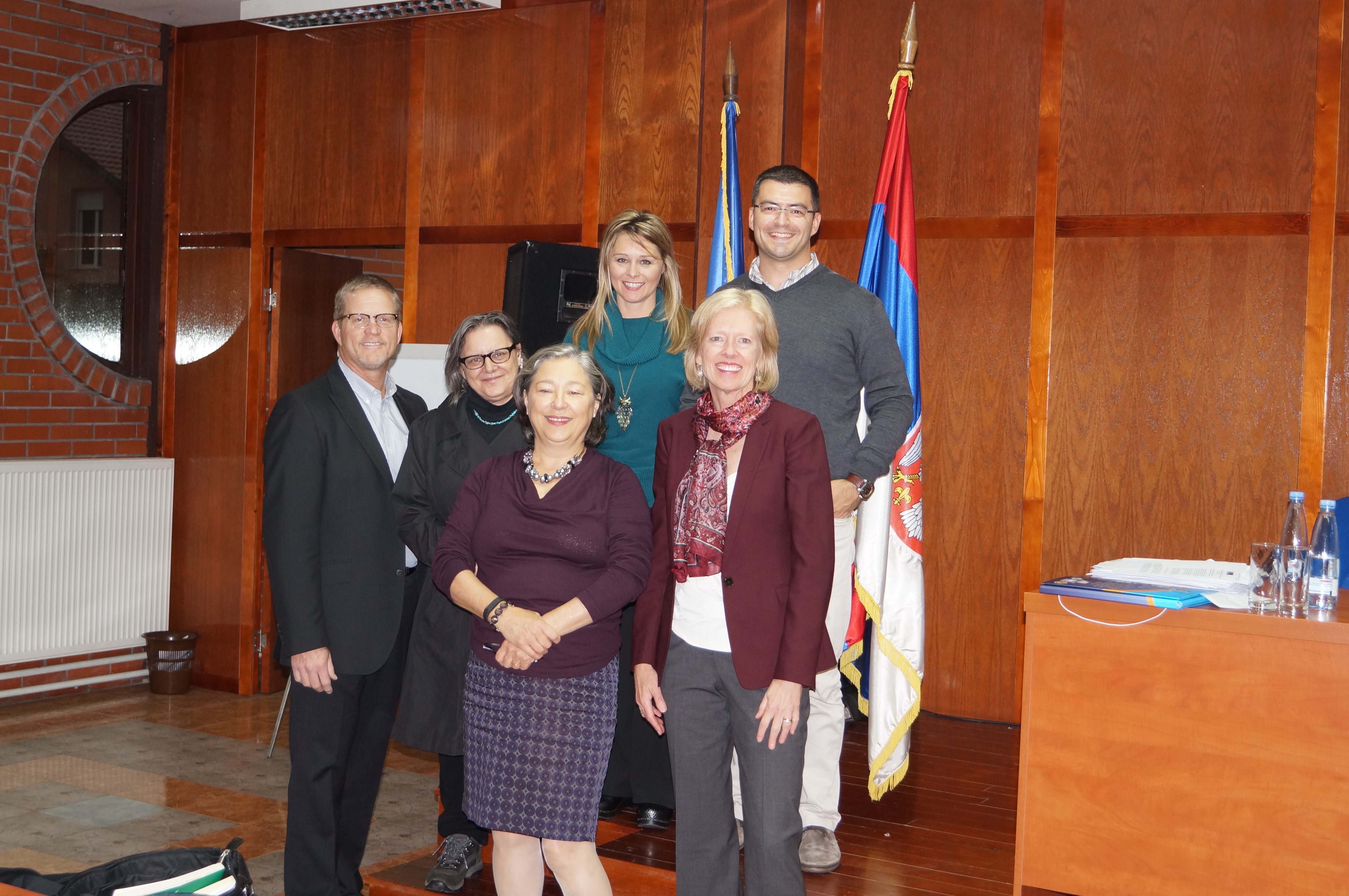 We have just returned from 16 days in the Balkans working with advocates and legal professionals towards a better legal system response to crimes of violence against women. We are greatly inspired and energized to see the progress and all the ways we have and will continue to contribute to it.

In Belgrade, Serbia, we presented a training that turned out to be an incredible experience. The participants were about 50 legal professionals from all over Serbia – police, prosecutors, judges, NGO’s, and government social workers. Serbia’s domestic violence laws are about 10 years old, and there are many struggles to implement them in a way that truly keeps women safe and holds violent offenders accountable.

The Advocates for Human Rights’ training team, Duluth Police Lieutenant Scott Jenkins, Hennepin County District Judge Kathryn Quaintance, and women’s advocate Shelly Carlson, from Moorhead, were all brilliant. The depth and breadth of their experience both as practitioners and trainers was so evident as they engaged the participants, encouraged their questions, modeled the practices they use in their own professions, role-played to bring their points to life, and lectured when needed. They were powerful with their messages, yet flexible to the needs of the audience, adapting planned activities along the way. The tone was one of sharing knowledge and lessons learned in Minnesota, where our experience with reform on violence against women is 40 years old – among the oldest legacies in the world.

We tried a new approach of breaking each sector into separate training audiences for the first day and then bringing them all back together for the second day to communicate and collaborate with the other sectors. This showed the essence of the Coordinated Community Response Model created by Ellen Pence in Duluth, Minnesota.

The first day, we were able to focus on best practices within specific disciplines. For example, the prosecutors needed detailed information about why victims recant and how to obtain convictions based on thorough gathering of evidence. The second day, continuing our use of a hypothetical fact situation where a woman was thrown down the stairs, strangled and later threatened with a gun to her head if she testified, we demonstrated that each agency only has limited information about the case. In order to truly protect the victim and hold the offender accountable, they needed to work together with each other and the victim’s advocate. For example, the police and prosecutors did not know that the victim had been threatened. Also, there was limited information about the strangulation, until the victim described it to the NGO’s. Without this, the exercise showed how the legal system would be less likely to treat the case seriously and release the violent man at the first court hearing.

The participants were actively engaged over the two days and hugely grateful for the experience. The United States Embassy staff in Belgrade, who hosted the event, were thrilled, calling the training “transformational.” One said,

“Let me assure you that you truly created a small miracle with your extraordinary professional expertise combined with such exquisite cultural sensitivity and deeply touching humanity. We are grateful to you, and I personally am humbled to have had the privilege to be part of this event. I admire all of you, thank you for sharing so generally, and making a difference beyond what we could have imagined.”

We are excited to take this new model to other venues throughout the world.

From Belgrade, we traveled to Sofia, Bulgaria, for more workshops with advocates and police. This work continues our 20-year partnership with the Bulgarian Gender Research Foundation (BGRF) to improve laws on violence against women and their implementation. Rose Park, The Advocates’ research director, worked with volunteer Deb Fowler, a consultant on leadership and team-building, to present a workshop for women’s rights advocates. The goal was to enhance leadership skills that will sustain and grow the movement to end violence against women.

Lieutenant Scott Jenkins and I traveled on to Burgas, Bulgaria, on the Black Sea coast, to work with 25 police officers. Several of these officers are leaders in the movement to end domestic violence in Bulgaria and were eager to tap into the extensive experience of Lieutenant Jenkins on problems they face in the implementation of their laws. For example, many of these officers had never had training in how to investigate and document attempted strangulation, common in domestic violence cases. They were unaware of the serious nature of this crime – which Minnesota now prosecutes as a felony – because often the only visible injuries are bruising and scratches. They learned how this kind of assault can qualify as attempted murder and how internal injuries can result. The two days were filled with lively and animated dialogue. 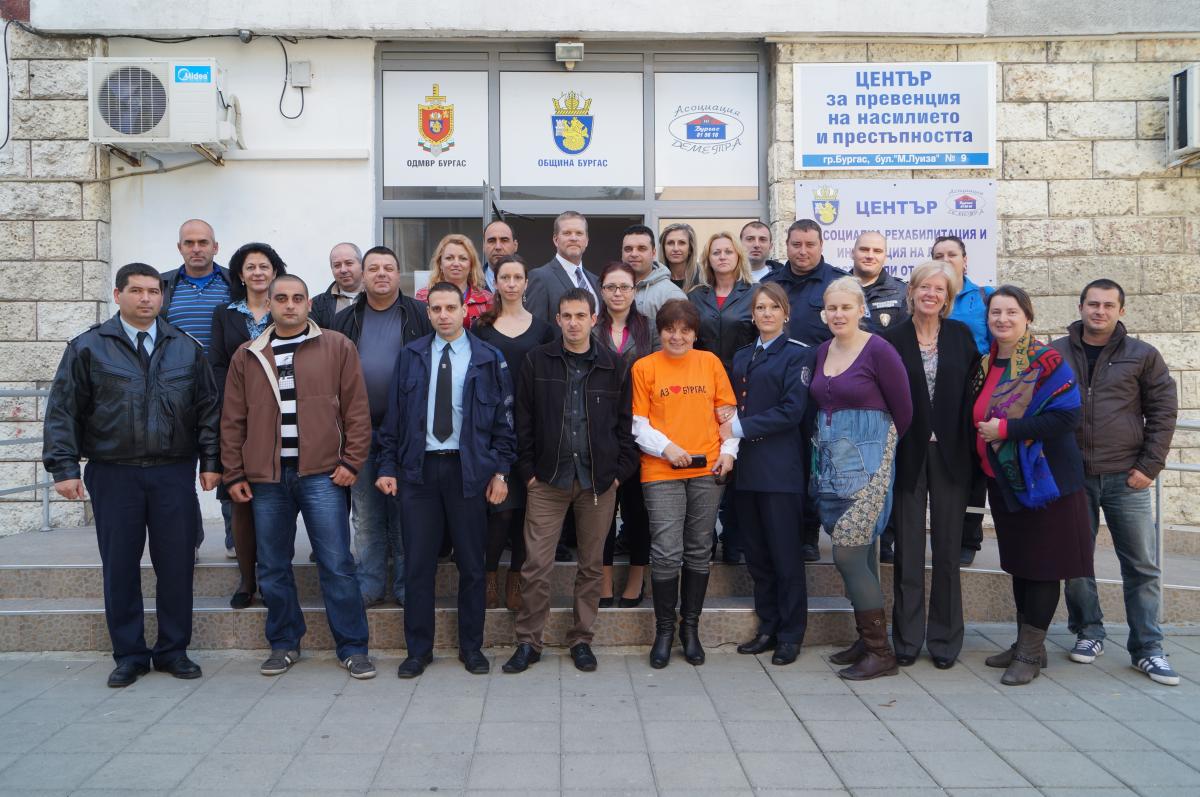 We left the Balkans with plans to return and continue this dynamic work. One initiative we are working on with our partners is The Black Sea Academy, a long-term training institute on violence against women. This would be a forum for learning and progress for legal professionals, advocates and social workers all over the region toward the goal of ending violence against women and girls.

We are so grateful to have such tremendous support for this important work!

At top: The Advocates’ team and U.S. Embassy staff in Belgrade, Serbia