While most schools might have ended their week celebrating Valentine’s Day or President’s Day, the students at Yinghua Academy were busy putting on a dazzling Chinese New Year’s performance for their families. The Chinese immersion charter public school welcomed the Year of the Tiger on Friday with dances, skits, and musical performances involving all 300-plus students.

Every seat of the gym-turned-auditorium was filled, and many parents were left crowded in the back against the wall. Big red paper banners hung from the ceiling and a large painting of a dragon served as a stage backdrop, while loud chants of “gōng xǐ fā cái!”, the traditional Chinese New Year greeting of congratulations and prosperity, rang out all through the show.

Yinghua Academy Executive Director Betsy Lueth said this was the school’s fourth annual Chinese New Year celebration and their biggest event of the year. She says the school focuses a lot of energy and resources on this celebration because the lunar new year is considered the most important holiday in Chinese culture. 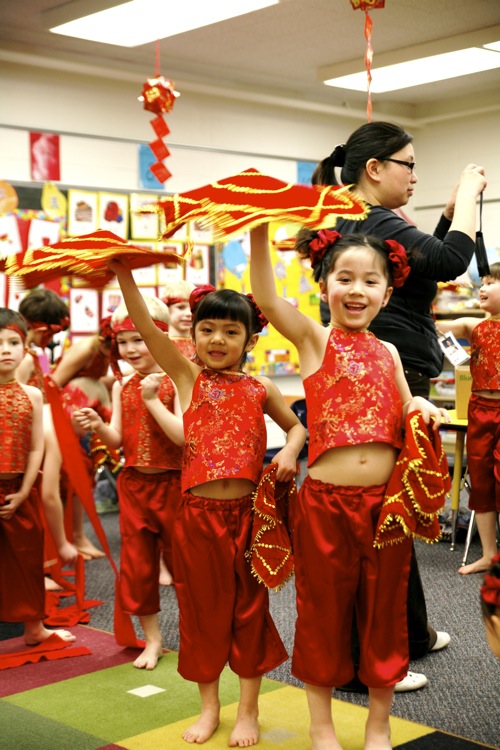 “Instead of a talent show, we do this and the students spend a good couple of months practicing their performances,” Lueth said.

The effort could be seen in the profuse amounts of Mandarin Chinese used throughout the show, including a ten minute skit performed completely in Mandarin by a third grade class. Elaborate dances also showcased the diversity within Chinese culture, from a taichi dance with fans to a lively Uyghur dance using tambourines.

Carston Swenson was one of two sixth graders who emceed the show both in English and Chinese. Although he was armed with a copy of the script onstage, much of it was still written in Chinese characters. He entered the school as a second grader, when the school was first established. His mother, Kristin, says she’s extremely pleased at the amount of Chinese Carston has mastered and that the 40-minute drive from their home in Savage to the school is worth it.

“What we’re giving him is going to help him compete for the jobs of the future in a global environment,” she said.

After the two-hour show, parents and children alike left the makeshift auditorium with smiles, though the children had an extra reason to be happy. As they exited they were handed Hóng Bāo, small red envelopes given to children during the New Year filled with treats.