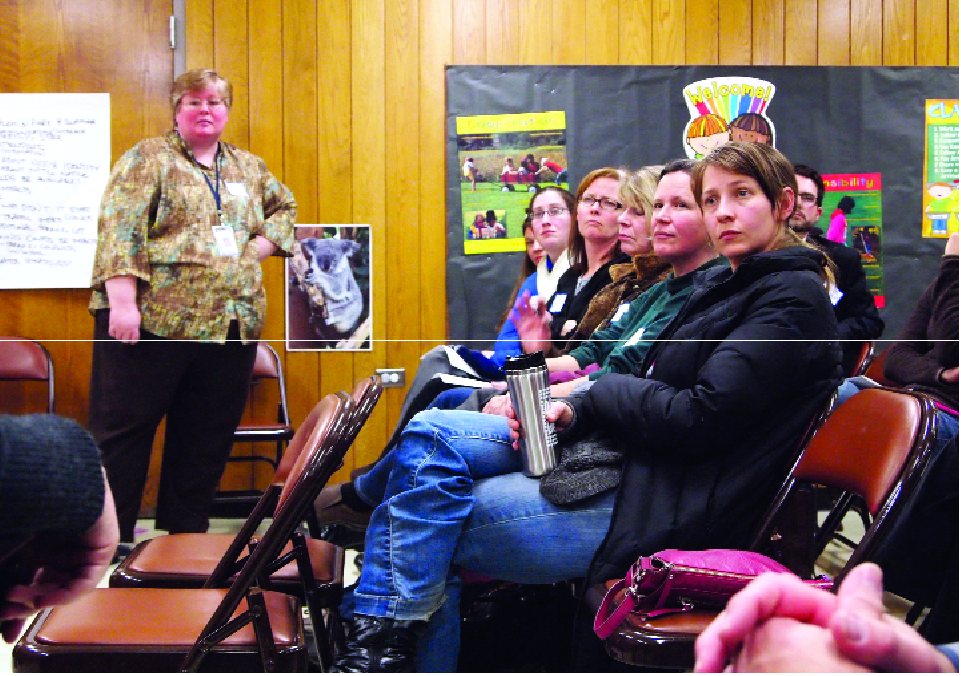 A charter school popular for its academics but criticized for taking away neighborhood gym and field access may put park users through a couple more years of disruption. But, park planners say, the end result could be brand new accommodations much better than ever imagined 42 years ago when the shared facility was built.

Yinghua Academy, a Chinese Immersion school, proposes to expand the building that was Putnam School at 1616 Buchanan St. NE. Putnam had shared a gymnasium with the Minneapolis Park and Recreation Board (MPRB), which still operates a staffed park building attached to the school’s south end. The Minneapolis Public Schools sold its land interest to a corporation that now leases to the charter school.

Jen Shadowens, a Yinghua parent who chairs their board of directors, said the K-8 public charter school starts by teaching all of its classes in Mandarin, so that the children are as fluent as would be native Mandarin speakers by 8th grade. By 5th through 7th grade, 50 percent of the instruction is in English.

“We have no plans for a high school. It’s a niche. We didn’t come here with plans for expanding,” either, but got a grant to do a middle school.

“An immersion school only starts at the base,” with kindergarten filling first—they started in 2006 with 79, and the other grades being added as children move through—approximately 380 students now. There has been so much demand, there are now 100 kindergarteners, and their classrooms have moved to Grace Center for Community Life. “We want to have 700 students here at Yinghua” after the building is expanded.

Neighborhood residents attending a Nov. 8 meeting at the park building, 1615 Pierce St. NE, talked about tensions with the school, saying school staff ordered neighborhood kids out of the park when their students were in the park. Some parents said their kids now don’t want to go back to the park. Though there was an agreement for sharing the gym, residents said the school took it over three years ago.

Park Planner Jennifer Ringold said that after many months of exploring expanding both the school and the park facilities under a potential new joint agreement, both parties decided it would be better to build separately. MPRB Commissioner Liz Wielinski, who represents Northeast on the Board, said that even beyond trust issues, “they wouldn’t get financed if they built on our property.”

MPRB assembled $4 million for replacing the park building (Yinghua’s expansion would remove the old building) and $1.5 million for field improvements.

Five and a half million dollars “is a lot for a park. Usually we’re looking at $200,000 for a playground,” Ringold said. It took a while to put the money together, some of it won’t be available until 2014 when the construction would get done. A grand opening is expected in early 2015.

Shadowens acknowledged and apologized for previous behaviors by staff and said that the school’s leader has been replaced. The new leader has been much more neighborhood friendly and has communicated to the staff the importance of community relations and communication.

Neighbors vented that the damage has been done and when the park building shuts down for renovation, it will destroy community. Laura Sparks, a park staffer, said the preschoolers using the parks would go to Logan Park along with probably the ceramics classes for adults (there are two kilns at Logan). Another option would be to staff the now-unstaffed Beltrami Park, and Northeast Park’s kids could go there.

“To leave (Northeast Park) unattended is just not smart. You will have people coming here,” said one adjacent resident.

Paul Jaeger, overall supervisor for the region that includes Northeast Park, talked about what would happen with the park building shut down for renovations. He said there would be extra police patrols assigned to the area. He talked about staffing up Beltrami Park, and said the construction would be timed to work around the needs of the NE/SE (Northeast/ Southeast) soccer program that now uses the fields. Planners noted residents’ remarks about needing more bathrooms open, or portable toilet locations. Everyone agreed that Lupient Water Park, while close, was not an option.

Jackie Steele, wife of Brian Steele, the Northeast Park Neighborhood Association’s longtime president, said “the neighborhood group meets here. We shouldn’t be meeting in Edina. Little by little, we’ve lost our home. We shouldn’t be merging with Beltrami. We’re the second smallest neighborhood in the city. We went through all the malarkey with Lupient [building the nearby water park]. First this neighborhood lost its school, now new people came in. We need to recapture this identity.” She said Brian Steele was not officially notified of the Nov. 8 meeting and had to find out about it through an email forwarded from someone else.

Mandy Franz, who coaches tennis at the park, said Yinghua staff and parents have been taking up not only their own parking lot off the Pierce Street cul-de-sac, but the park-designated lot accessed by Fillmore Street. (This was news to Shadowens, who said she would look into it.) Franz said, “we will be sharing the park land. It’s no secret it’s not been a good relationship,” suspicious that even after rebuilding the park, community kids would be kicked off the site because the school is using it.

What will the new park facility look like, will it be worth the wait? And why can’t the timeline be compressed? Some said it feels like a lot of decisions have been made without any input from the community.

Ringold said the park system as a whole is on the brink of “big decisions for the future. The next generation of parks.” Most of the 50 buildings citywide are about the same age, built in the 1960s, about 7,000 square feet, with two meeting rooms, a multi-purpose room and a gym. Part of the Northeast Park planning will need to synch with new standards they will want to set.

She articulated the rest of the process: End of November, early December 2012 set out the charge and composition of a community advisory committee. Then, like the process used recently for Webber Park or Calhoun-Isles, there would be multi-day design charrettes in which professionals spend concentrated time talking with community members, assessing the site, sketching, and getting feedback on ideas. That process would go through background in February through April, charrette meetings in May, and final community feedback meetings in June and July 2013. By August 2013 the recommendations would be made to MPRB with additional public comment welcome. Detailed design and construction documents would be prepared in winter and bids let for construction starting in summer 2014.

More about Yinghua’s plans: Kou Vang, a real estate agent representing the property owner, said the parking lot currently serving Yinghua would be expanded to the north on land they own, with a traffic pattern flowing through (currently it’s front-in, back out). The cul-de-sac goes away and becomes a drive way.

Yinghua’s expansion would replace the current park building with a one-story gym, fill in the current courtyard and add a three-story classroom tower bringing the total classrooms to 41. Yinghua representatives said they would like to include some event-friendly space on the first floor that could be made available for activities in the parks. Their gym would have a stage, also available when the school isn’t using it.

To proceed, Yinghua will need the City to give variances for FAR ratio (how much of a site can be covered by building), impervious surfaces, and number of parking stalls (they have 37, they need 41). They also need conditional use permits for a three story building in a residential area, and for the fact that they are a school wanting to expand. Conditional use permits attach to the land deed. These will go before the Minneapolis City Planning Commission, it was suggested residents get on the GovDelivery email list for meeting notices.

Toward the end of the meeting, a couple of residents offered sentiments that “this school is a gem. Neighbors are moving here because of this school.” After the construction is done, “to have two new buildings” will be an asset.