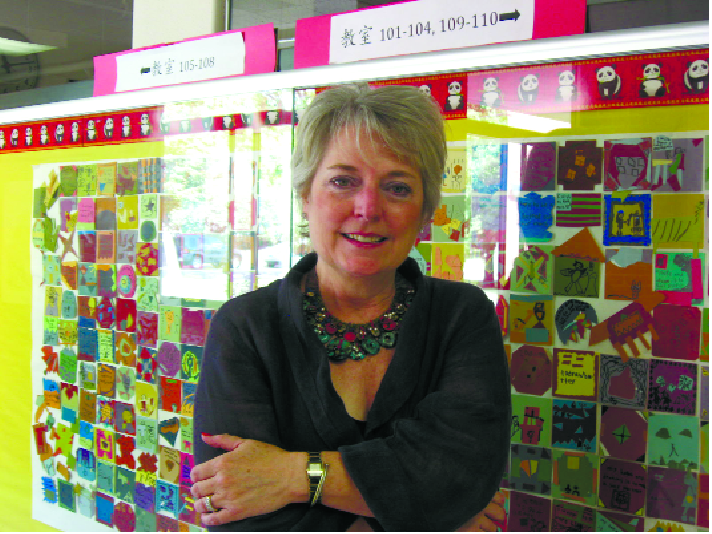 Northeast resident and parent Jennifer Shadowens said that her two children giggle when she tries to speak Chinese to them.

Both youngsters are students at Yinghua Academy, a K-8 Chinese immersion public charter school at 1616 Buchanan St. NE. Shadowens, who is Yinghua’s board chair, said she doesn’t mind when her attempts to replicate the language’s tonal sounds amuse her kids.

“It’s empowering for them to be experts at something.” She added that she and her husband—who met in a Greek language class in Athens—resolved that their children would learn another language when they were young. “The program has helped them be successful. It makes learning a language a way of life. Now they want to learn Spanish and Nepali. I love it that my kids think it’s normal.”

Yinghua Academy, founded in St. Paul in 2006, was the first Chinese immersion charter public school in the United States. The school started with 79 students and has added a grade level every year, and is now a K-8 school. With a current student population of 575 in Northeast, the school has outgrown its aging 1966 building, the site of the former Putnam Elementary School.

Construction on a new three-story addition is now underway. The eventual goal, according to CEO and Executive Director Susan Berg, is to accommodate 700-800 students.

But as the construction continues, so does the school’s early uneasy relationship with the neighborhood and the Minneapolis Park and Recreation Board (MPRB).

In the 2012-2013 school year, according to school information, Yinghua was ranked in the top five percent of all charter and public schools in Minnesota.

The only new students Yinghua accepts are kindergartners and first graders. (When they are older than that, Berg said, it is too difficult for them to assimilate into a language immersion school.) Teachers and students speak exclusively Chinese for the first two years. “All subjects—math, science, social studies and music—are taught in Chinese. Formal instruction in English begins in second grade. By the time they reach middle school—grades 5 to 8—instruction is 50-50, with half the classes taught in English, half in Chinese,” Berg said.

Seventh and eighth graders have a one-on-one iPad program, meaning they all use iPads.

Only 7 percent of the students’ parents speak Chinese, she added. The student body includes many different ethnicities, and families’ addresses include 80 different ZIP codes. Students come from as far away as Farmington, North Oaks, Elk River and Wayzata. The parents want Chinese immersion, Berg said.

“Research tells us that the time to learn a language is when we are little. Our families are generally comprised of well-educated people who recognize the value of the Chinese language and culture. They understand that learning a second language enhances overall learning.” She added that academic achievement at the school is high, which is especially interesting since they take state tests in English, but have learned math and other academic subjects in Chinese.

Berg said that all students receive music appreciation instruction, starting in kindergarten. In fourth grade they begin to learn string instruments. “Even though the school is only seven years old, we have two orchestras…” The school has a music conservatory, offering private lessons after school. Students may choose to learn any instrument, including the erhu, a traditional Chinese string instrument

Yinghua Academy employs 41 full-time teachers and has a total of 78 employees. It uses the Core Knowledge Sequence curriculum, and teachers use the Total Physical Response method, physically acting out word meanings. The teachers who speak fluent Mandarin Chinese also speak English. The school’s authorizer is Friends of Education, which authorizes 26 charter schools. The school has sports teams and belongs to the Independent League of Sports Teams.

Yinghua has an 11-member board of directors, which must include at least one community member, one parent and one licensed teacher. The other eight members, Berg said, can be a combination of any of those three categories.

Although it has made strides in enrollment and academic achievement, the school’s bumpy start in the Northeast Park neighborhood four years ago hasn’t ended yet. Neighbors who attended a park meeting last November said that Yinghua school staff had ordered neighborhood children out of the public park when their students were in it, and now the neighborhood kids don’t want to go to the park anymore.

The problems started after the Minneapolis Public School board closed Putnam after the 2005-2006 school year (disappointing many parents and neighbors), and the building sat empty until its 2008 sale to a company that leases the space to Yinghua. When it began operations in 2009, Yinghua inherited a tricky land ownership situation: Putnam had not only shared a gymnasium with MPRB, but a staffed park building (its address was 1615 Pierce St. NE), was physically attached to the school’s south end. The park board owned the park building, but the school district had owned the land underneath it.

Neighbors soon complained that the school was taking over too much park space and too many parking places in Northeast Park, and that Yinghua had refused to continue sharing its gym.

District One MPRB Commissioner Liz Wielinski said, “We built on school board property and had a long-term lease. When they closed the building and sold it, we were at the mercy of the new owner. We started out sharing the rec center [the park building] and gym, but in 2009 there was a shooting during the park’s open gym program. After that, Yinghua was not willing to share the gym. They also told us that if they expanded, they would need their land back.”

After planning the Phase I and Phase II building projects, Yinghua did take its land back. Construction crews demolished the gym and the park building in August. Phase I is a 46,500 square foot project that will include a new school gym (in the former park building’s space), and the three-story building; scheduled for completion this winter. Phase II includes renovating the Putnam building, connecting it to the new space and upgrading its heating and air conditioning systems; scheduled for completion in 2014.

Shadowens said it is a $14 million project. A 501-3-c non-profit corporation, Educational Properties, will own the building. (Charter schools cannot own, build, or develop property until they are eight years old.)

Meanwhile, MPRB has a $5.5 million renovation plan in the works for Northeast Park, which includes a new building of its own and improving the fields. Jennifer Ringold, MPRB’s director of strategic planning, said they are working on a master plan but have not yet decided the new building’s site. “We don’t have a clear idea, yet, of the size of the building, but it will probably be bigger than before,” she said.

Neither the Stan (Lefty) Cyson field nor the Jim Lupient Water Park will be moving, she added, and “We have to make sure that the Morneau Field No. 33 will be re-created somewhere in the park.” The mini-golf area and the other field space, including soccer fields and tennis courts, might be moved or reconfigured. Master Plan documents are on the park board’s website, www.minneapolisparks.org. The recreation facility plan is scheduled for completion in 2014, with groundbreaking proposed for 2015.

Shadowens, of Yinghua’s board, said that the school wants to mend relationships with the neighbors. “As a Northeast resident, I think it is unfortunate that there are some tensions. The administrative team we have now was not around when these things were happening. We know people are curious about our program, and we hope to break down that mystique. We are continuing to try to build partnerships with the park board and the Northeast neighborhood community. We are all neighbors, and there is no reason not to share space if it benefits anyone. Part of the design of our new building was so that we could share areas and have a public part.”