Celebration of Chinese (Lunar) New Year on Thursday, February 3, brings hope, a break in this merciless winter, and a profound reminder that man’s lunar landing did not unravel the mysteries of the moon!  The more we learn and understand the wonders of the Lunar New Year, the more we can delight in the mythology, the universality, the dimensions and the absolute wonder of the ascendancy of this small sliver of the cosmos.

Chinese New Year is celebrated according to the Chinese calendar, a venerable measure of the passage of time some 2,640 years older than the Gregorian calendar.  The Lunar New Year, celebrated with the rise of the New Moon in Aquarius, inexorably follows a familiar cycle that begins anew every twelve years, each year identified by an animal.  Chinese New Year 2011 heralds the Year of the Rabbit, a quiet year, a time to recoup from the Year of the Tiger.  Fortunate is the child born in the Year of the Rabbit!

In fact, the Chinese New Year is not a day but a fifteen-day observance rich with ritual and routines. The Lunar New Year is a major holiday period in Indonesia, Macau, Malaysia, Philippines, Singapore, and Taiwan.   In Korea the New Year is known as Seollal, in Tibet and Bhutan the occasion is Losar, in Mongolia the people celebrate Tsagaan Sar, in Vietnam it is Tet, in an earlier time in Japan it was known as Oshogatsu.

People from all nations celebrate in the new world as well.  Throughout the Twin Cities, there are magnificent celebrations of every possible description.  There will be music, dance, cultural events, food, food, food and red lanterns everywhere.

A few picks from a plethora of possibilities:  The Vietnamese Student Association invites the community to a free and open celebration on February 5 at the Ted Mann Concert Hall on the U of M Campus – It’s a comedy in which the audience ventures on a musical journey following the lives of a Vietnamese family.  On the high end of the festivities is a Chinese New Year Gala sponsored by the Chinese American Association of Minnesota.  The Gala, Sunday, February 13, at the same Ted Mann site, features an All-Star Performing Troop with multiple talents ranging from traditional singing and dances to a folk hand shadow show.’

On Saturday, February 5, there’s a grand 2011 Lunhar New Year Celebration party at 5840 Humboldt Avene North in Brooklyn Center.  The family celebration, 5:00-8:00 p.m., features learning and playing Korean games, face painting, and a photo op with a Korean Queen in traditional dress.  Dinner includes bulgogi, mandoo, dduck-bok-gi and more.  There will be a slide show, Korean dance performance, and Korean traditional fashion show.  The evening ends with the traditional Korean vow Sea-bae time.  Children’s programs are free,  The family backage is $35, adults $15, children under 12 $10, four and under no charge. Contact kamcnter@gmail.com or 612 331 0143

An interesting, though prosaic, sidebar fact is that the United States Post Office issues a Chinese New Year stamp, this year a forever stamp designed to last through multiple  lunar cycles. 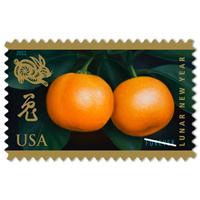 Though each nation and each family has its own traditions, the rituals are constant.  New Year’s Eve and New Year’s Day are celebrated as family events, a time of reunion and thanksgiving.  The observance may or may not include a traditional religious ceremony to honor Heaven and Earth, the gods of the household and the family ancestors.  Sacrifice to the ancestors, the heart of the rituals, unites living members with their forebears who are remembered with great respect because they were responsible for laying the foundations for the fortune and glory of the family.  The New Year rituals end with celebration of the Lantern Festival, a festive occasion that involves children carrying lanterns to the temple.  In some communities the Lantern Festival is celebrated as the equivalent of Valentine’s Day. 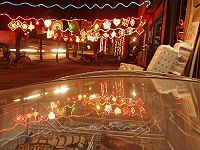 Though the legend of the Chinese New Year takes many forms, there are constant themes.  The word Nian, which in modern Chinese means “year,” was originally the name of a monster beast that started to prey on people the night before the beginning of a new year.  Nian seems to have had a very large mouth that would swallow several mere humans with a single bite.  An old man came to rescue the frightened people offering to subdue Nian.  He said, “I understand that you are very strong, but can you swallow the other beasts of prey on earth instead of people who are by no means of your worthy opponents?”  So Nian swallowed all the beasts of prey on earth.  After that the old man disappeared, riding the beast Nian.  He turned out to be an immortal god.  People could resume their lives.

Before he left,  the old man told people to cut up red paper decorations on their windows and doors at the end of the year to scare away Nian in case he sneaked back again.  Thus, the ubiquitous red lanterns and the prevalence of red, the most dangerous color, in modern celebrations of the Chinese New Year. The customs of putting up red paper and firing firecrackers to scare away Nian remain the hallmarks of any Chinese New Year celebration – from St. Paul to San Francisco to Hong Kong!

And thus the New Year’s greeting  “Guo Nian” which has come to mean “Celebrate the new year!” From blogs to community newspapers, mainstream media and the Twin Cities Daily Planet the “what to do” columns overflow with Chinese New Year cultural and culinary options for celebrating this grand fortnight.  Guo Nian!