All photos by Lisa Gonzalez﻿

Yarn bombing, guerilla knitting, and graffiti knitting are described as “warm and fuzzy” graffiti art.  The concept behind yarn bombing is to soften and beautify the harsh and sometimes ugly urban landscape.  Sometimes simple, sometimes elaborate and complex, tagging objects with hand knitted or crocheted panels is growing in popularity.  The results are expressive, colorful, and fun, but not permanent.

In recent years, the practice has expanded world wide.  Bridges, buses, bicycle racks, water towers –  projects range from petite to powerful all over the world.  From giant flower doilies on chain link fences to a complete covering of the Wall Street Bull, yarn artists have jumped at the chance to get creative with their scrap yarn.

Surprisingly, International Yarn Bombing Day, came and went on June 11 with no fanfare in the Twin Cities.  Known for an inerrant love of picturesque landscapes and appreciation of all things pleasant, one would expect Minnesotans to find new ways to celebrate the art of yarn bombing in the Cities.  It could be that Minnesotans are so content there is no need for yarn graffiti or perhaps they just too darn nice.  Yarn graffiti pieces, while strategically placed artworks, are few and far between in the Twin Cities. 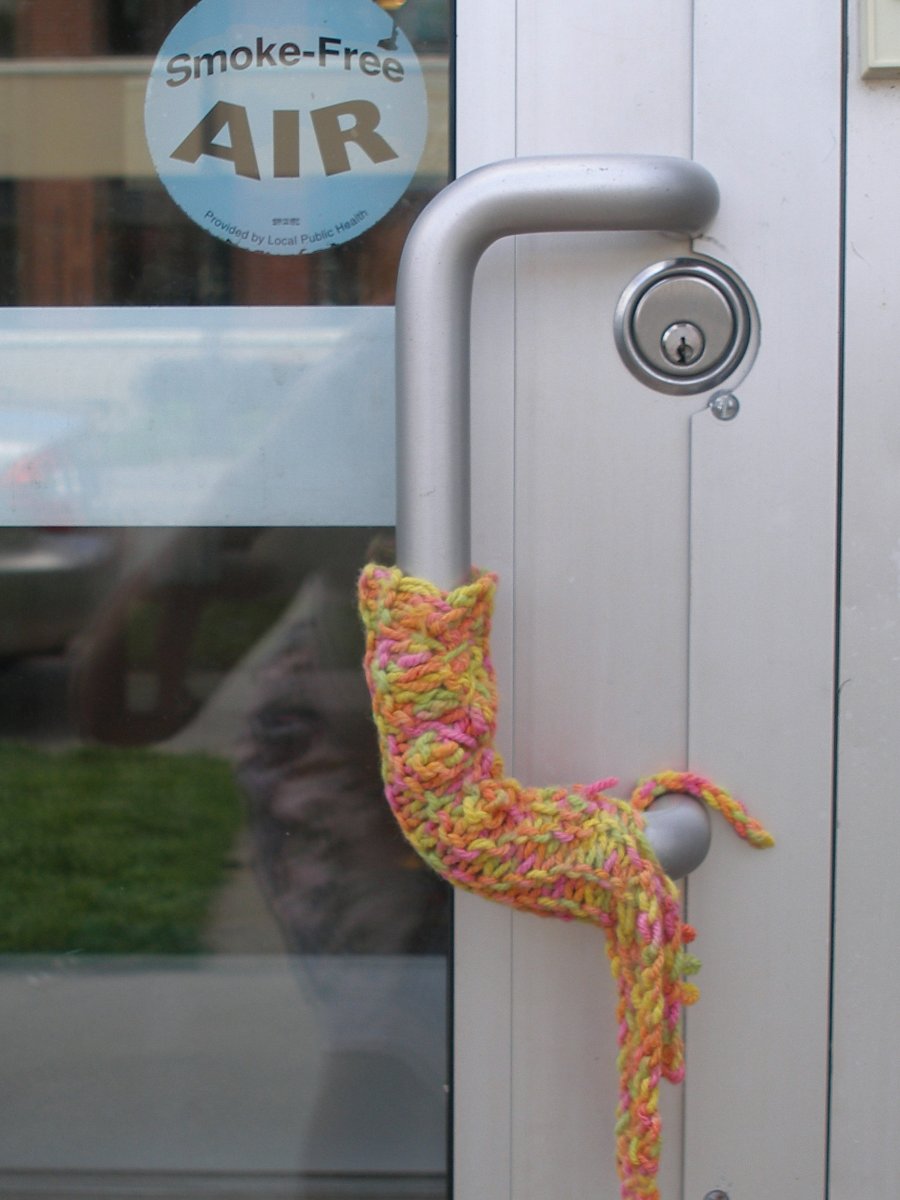 Legend tells that yarn bombing was born in Texas in 2005 when a yarn shop owner knitted a cozy for the door handle of her shop.  Here in Minneapolis, it is only logical that the Textile Center, 3000 University Ave, Minneapolis, follows suit. 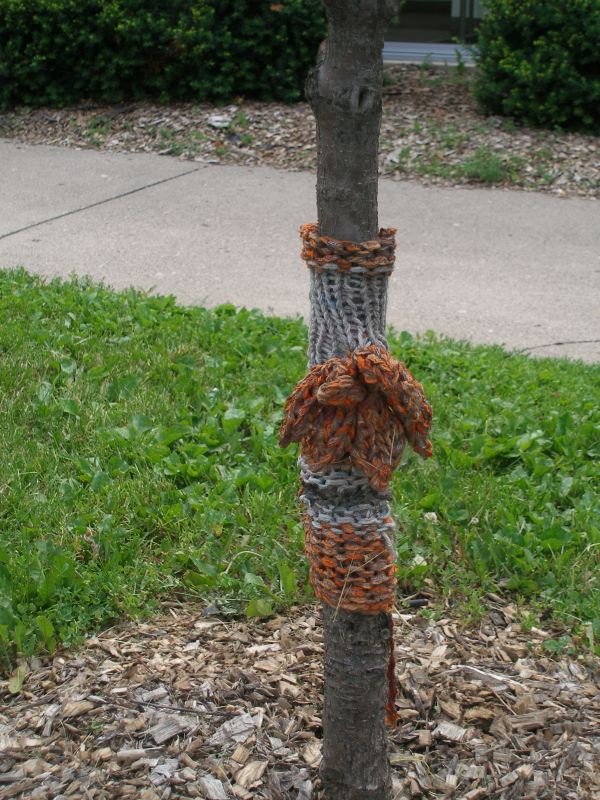 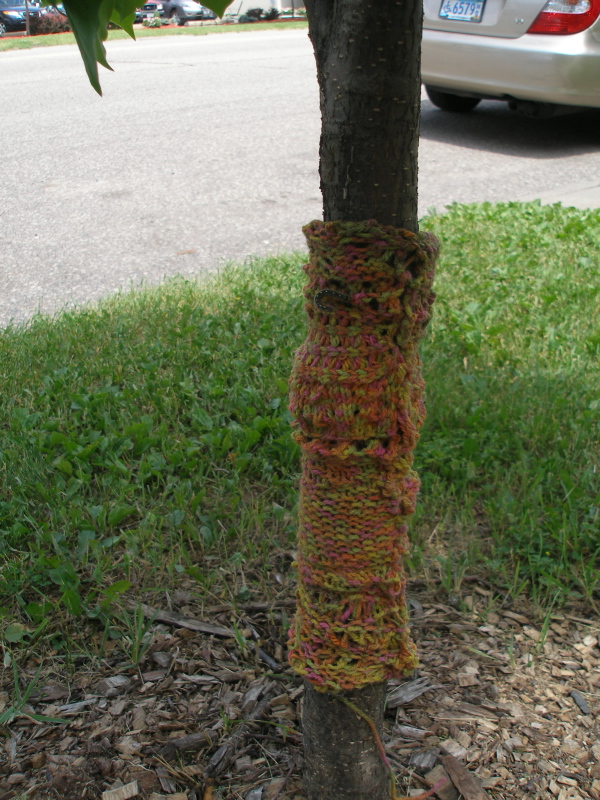 In front of the Textile Center. 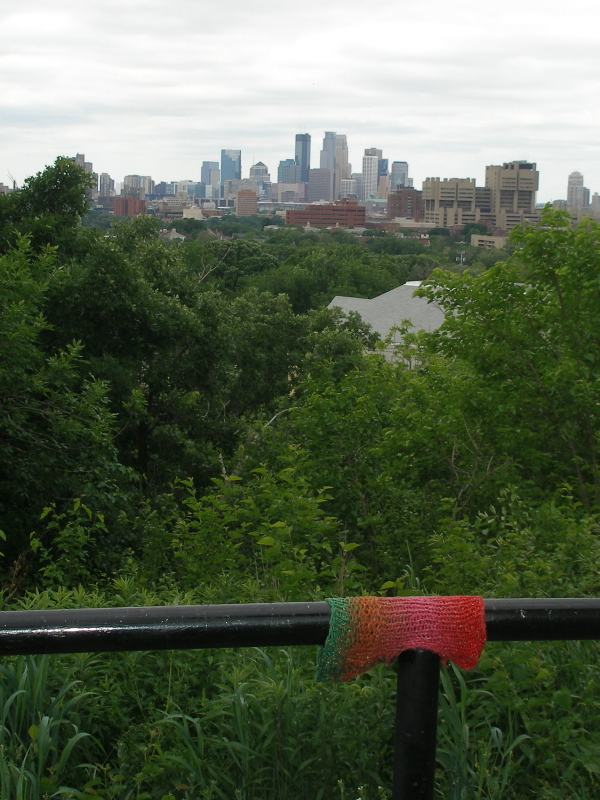 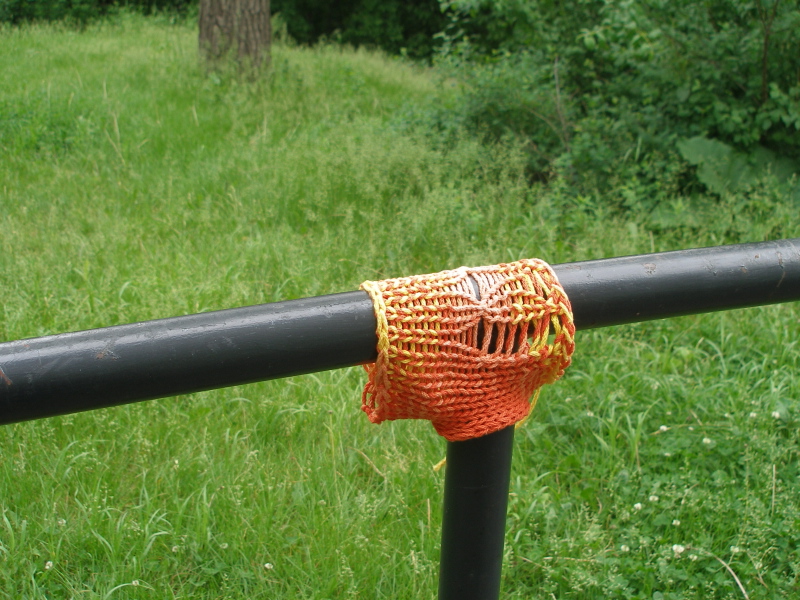 Around the corner at Prospect Park, on the Witch’s Hat Water Tower, small yarn graffiti complements the view and the setting. 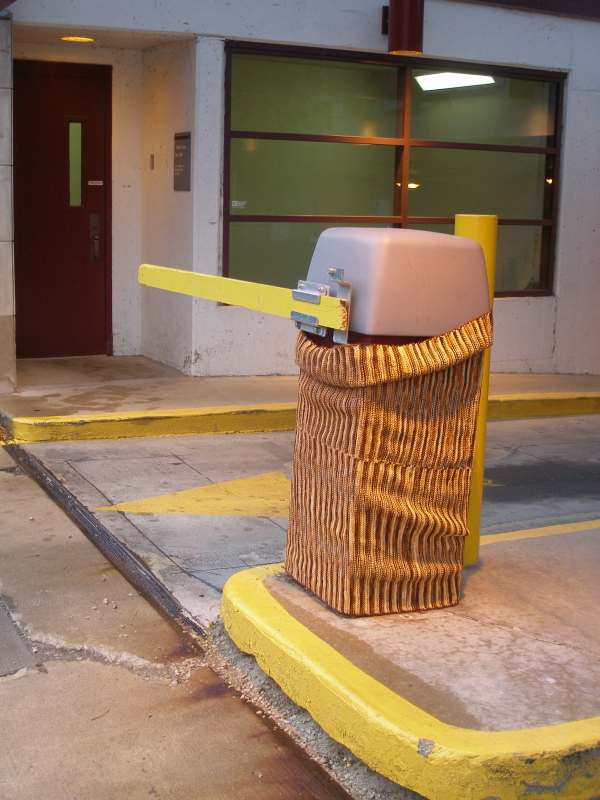 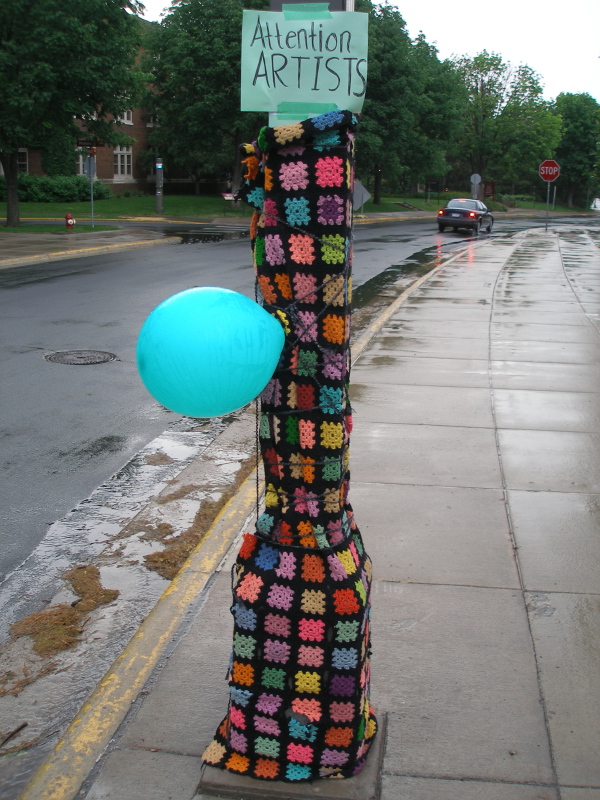 Back at the U, and the DIY Unraveled Festival on June 10th, the parking garage across the street and the lamppost outside the Festival were yarn bombed but quickly removed. 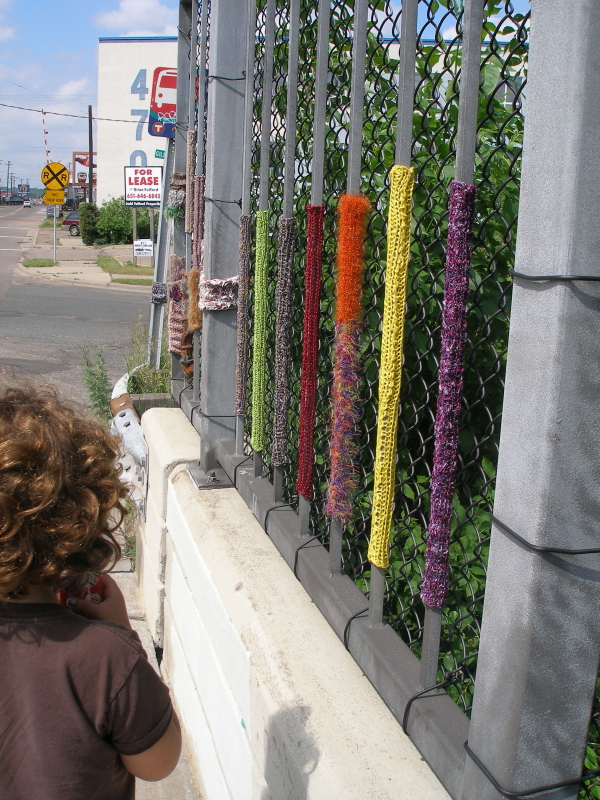 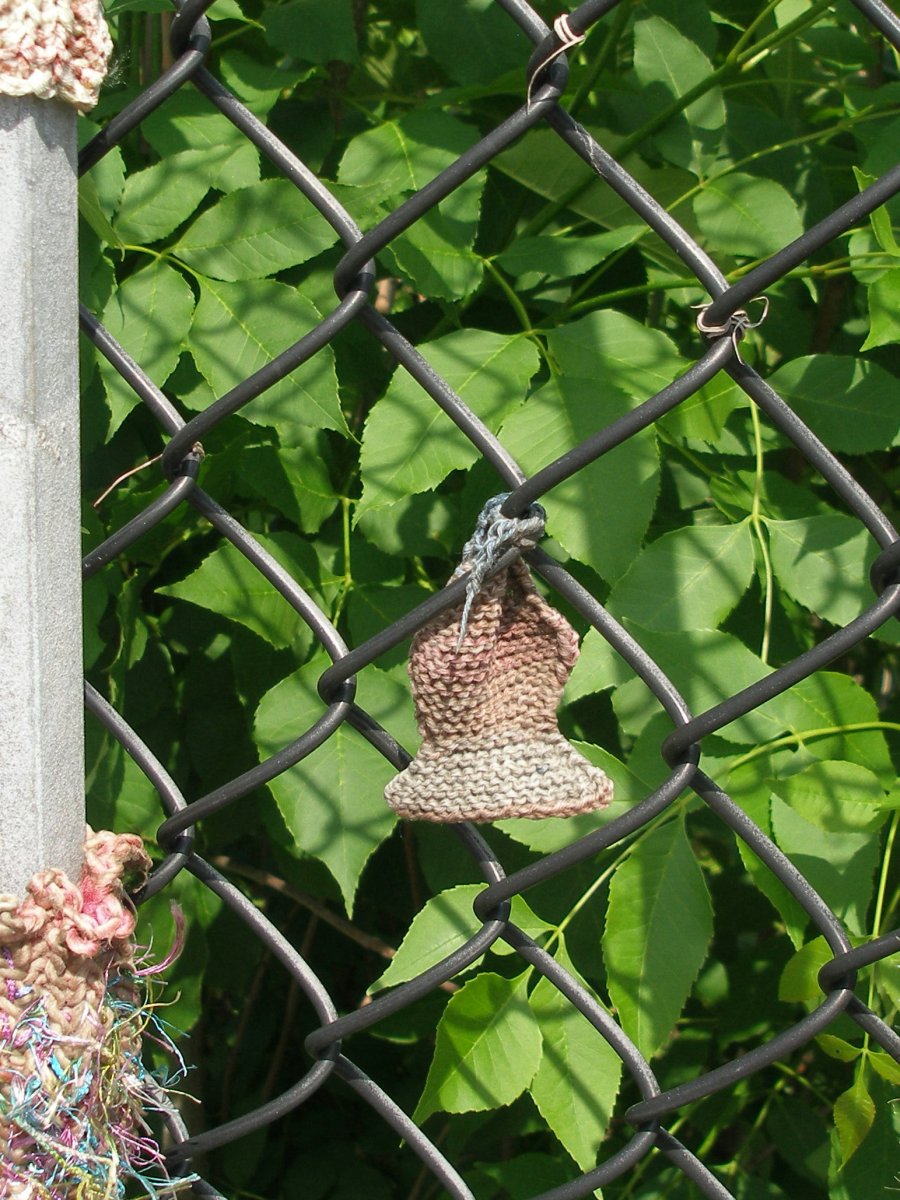 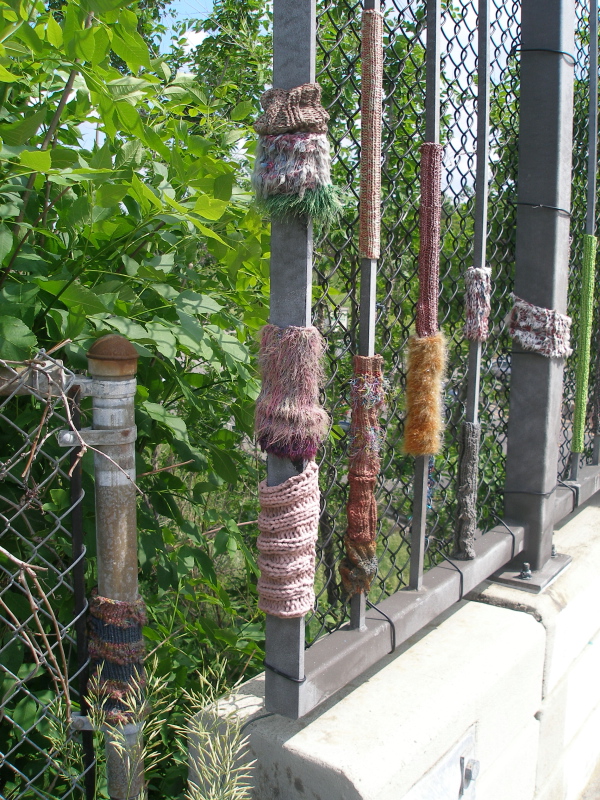 Heading to St. Paul, the bridge on Cleveland Ave. over I-94 seems an ideal location, true to the concept – harsh chain link, cement, and industry softened by bright glitter, fur, and a tiny fish. 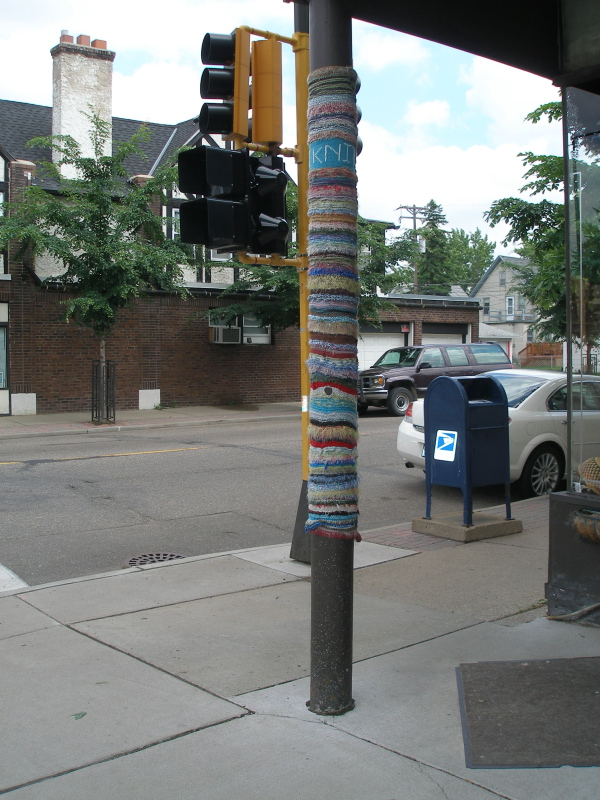 Borealis Yarn, 1340 Thomas Ave, a stone’s throw from the Central Corridor, with very nice people who have done their bit on the store front and were nice enough to direct the yarn bombing search to Prospect Park. 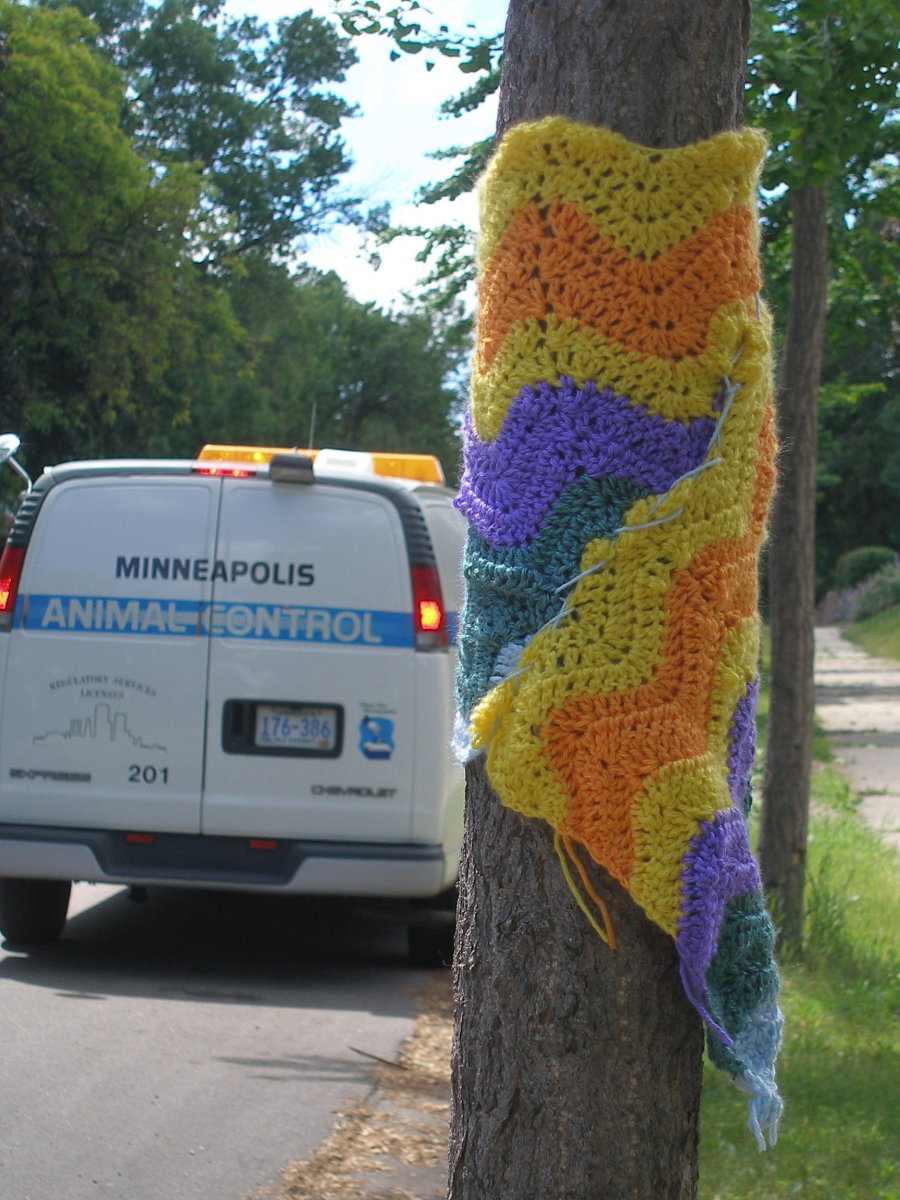 And back in Minneapolis, the writer’s attempt to dress up the boulevard. Note the perfect backdrop for urban beautification!

While current installations are a treasure, hopefully hooks and needles are plotting for more yarn bombing in the Twin Cities.