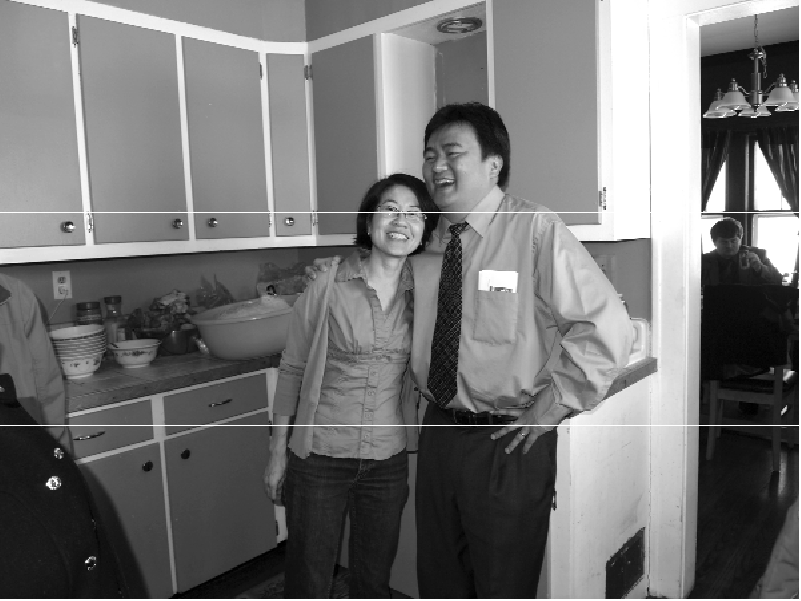 Mai Neng Moua and Blong Yang enjoy a joke with friends after fixing Pho, a beef soup, for supporters. (Photo by Margo Ashmore)

“We surprised people. In any other election 28,000 votes would have won,” said Blong Yang of his second place finish in the special District 2 Hennepin County race.

Running this time for Fifth Ward Minneapolis City Council, he noted a strong showing, 4,641 votes, versus Linda Higgins among Fifth Ward voters in the county race.

Yang’s wife Mai Neng Moua, introducing him at a Pho-raiser (beef soup served for a fundraiser) at their home March 16, said “we’re doing this again because we need someone who understands people in North Minneapolis.” We’re all underdogs, she said.

Reminiscent of current council member Don Samuels’ housing choice, “Blong [then a Legal Aid attorney] bought a house in North Minneapolis, “ Moua said, “ because there needed to be more good people in the city, a critical mass, to make things happen.”

Moua said she and her husband both came from families on public assistance whose goals were to “put food on the table and keep their kids out of trouble. We believe in the American Dream and hard work.” They accomplished their parents’ dream that they would use the brain, not physical strength, and so they feel bound to use their abilities to build community.

Yang said he will seek the DFL endorsement “and after that, a run to November 5th” and Ranked Choice voting, whether or not endorsed. “I want to connect with every voter in the ward, to let them know I have their best interest at heart and will work for them.”

In the County Commissioner race, the ground game was “we worked our butts off,” with grassroots organizing with “fearless” students, college kids and recent graduates.

Yang told NorthNews his issues are “Safety—if we can take care of that, everything comes to Minneapolis. Economic development is tied to safety; if it’s safe, businesses will want to locate here. The city needs to do a better job of protecting and recruiting businesses.”

“The Civil Rights Department” is another big issue, there may be “lofty goals, but if we don’t fund compliance it’s just lip service. Minneapolis has a rich history of civil rights,” from the days of Hubert Humphrey.

Housing—preserving what we have, letting people rehab housing, thinking about more options. “There’s a fear about complexes bringing in just poor people. I would like to see mixed-income. If we can keep the peace and make it safe, anyone would want to live here.

Announced candidates so far are relatively young, and their issues similar. Yang said “we may approach things differently because of our youth. Folks may look at me as an interloper, who doesn’t belong. People forget that the Hmong people live here. I want to see people recognize we’re an integral part of the community and I would represent all people. I would be much more representative of the ward, with a keen knowledge of issues within my community as well.”

Yang said he would not be surprised if still more candidates announce for the post. Brett Buckner and Ian Alexander were profiled in the February and March NorthNews.