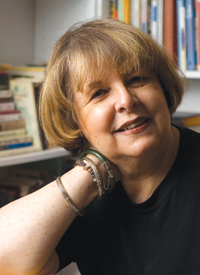 When Sandra Benítez was 39, she started to write. She wrote a novel. But when she’d finished, nobody wanted to publish it. Rejection notice followed rejection notice. She rewrote and sent it out again, rewrote and tried again. All told, 10 New York publishers said “no.” Finally, 13 years after she started, Coffeehouse Press in Minneapolis said “yes,” and A Place Where the Sea Remembers was published, launching Benítez’s career.

Benítez published three more novels in the next 11 years—Bitter Grounds, The Weight of All Things and Night of the Radishes—all well-received. Although she’s never hit the bestseller list, her books are often required reading in college classrooms and they’re popular with book clubs. “They’re steady sellers, let’s put it that way,” she said.

How odd, then, to find herself, after another 13 years, again facing rejection after rejection.

The book at issue this time is a departure for Benítez: a memoir. Not just any memoir, either: a memoir focused on the disabling disease of ulcerative colitis, which she had for 30 years, and her decision to have her colon removed and be fitted with an ostomy bag, her constant companion now for 12 years.

New plumbing
Benítez had chronic stomach problems as a young girl; when she was 32, she was diagnosed with ulcerative colitis. As she got older, the problems got worse. “What happens is you’re just chained to the bathroom,” she said. “Sometimes you can’t even make it to the bathroom. You can have diarrhea and constipation, too—alternating bouts. Fevers, terrible stomach pains. You have the urge to go to the bathroom, and then nothing happens. That’s because the inside of the colon, a mucus membrane, is sloughing off. There’s lots of bleeding, and finally it ulcerates.”

About a year after A Place Where the Sea Remembers was published, Benítez decided she’d had enough. In fact, with the success of her first novel had come the need to leave her Edina home and travel—for book signings, lectures and awards—and with travel came the realization of just how much the disease had constricted her life.

Although her life was miserable, Benítez said, it wasn’t an easy decision to have her colon removed; this is one of the quandaries she describes in her book Bag Lady: A Memoir. If she had the surgery, her body waste would go into a plastic bag attached to her side. She worried that people would be able to see it, that it would smell and that she would just be trading one misery for another.

“I was so hesitant about it at first,” she said, “but then my doctor and my family convinced me. The possibility of this turning into colon cancer was very high. And it made my life just a nightmare.”

With the surgery came a freedom she hadn’t anticipated: freedom from pain, from the potential for embarrassing accidents and from her bathroom tether. Her life, she said, is dramatically different. Her worst fears about the bag—also called an appliance—have not materialized. “Life is so much better after the ileostomy,” she said simply.

When a colostomy is performed, a small part of the colon is left poking out through the skin; the ostomy bag attaches to this. An ileostomy is similar, but the entire colon is removed and the little plug that’s drawn through the skin—Benítez calls it her little faucet; it’s also called a stoma—is the end of the small intestine.

“It’s bright red,” said Benítez. “[The doctor] cuffs it, like we cuff a sock, and sews the end of it to your stomach.”

The largest part of the bag is about the size of an open palm. Adhesive keeps the bag attached to her skin; the little faucet fits through a hole in the bag, which is kept shut with a clip. Benítez empties her bag about four or five times a day and changes bags about once a week. Most of the bag’s contents are liquid, she said, because the food hasn’t been concentrated by passing through a large intestine. She has seen some changes lately, though. “It’s interesting how the body adjusts to loss,” she said. “The small intestine starts trying to do what the large intestine did. So you might have some semi-solid stool in your bag.”

When Benítez changes her bag, she has to be very careful not to let the caustic gastric juices from the small intestine come in contact with her skin. “It has happened to me but I learned how to prevent it,” she said. “Every week when I change my bag I’m very careful to clean very well.”

It might sound like a heavy burden to some, but for Benítez it’s a price she happily pays in return for greater mobility and the absence of pain. The only thing the bag has stopped her from doing, she said, is eating mangoes.

“I just love mangoes,” she said. “I used to eat them by the bushel. I love them, but they have real long strings that can get clogged up in your new plumbing.”

A publishing company of her own
Benítez decided to write about her experiences with the bag in part to encourage other people who might be considering similar surgery. About 1.4 million Americans suffer from some kind of inflammatory bowel disease (ulcerative colitis and Crohn’s disease are the most common).

In spite of that, people are reluctant to talk about these issues and consequently don’t know much about it, she said. “It’s sort of a shameful thing to talk about.…As far as our elimination plumbing is concerned, most people don’t have any idea, except that what goes in usually comes out.”

With her memoir, Benítez is hoping to break that silence and bring a little humor to the discussion, too. Publishers weren’t amused.

Once Benítez finished the book, she went looking for a publisher, and it was déjà vu. “It was like I was back to the beginning,” she said. “I have many different publishers; they all turned it down because it would be too difficult to market, because it should be marketed to health care and medical care and patients. But I knew the book was much more. It’s also about my life as a mother and daughter and it’s about my writing life. I’m writing about the baggage we all carry. Mine just happens to be more visible.”

Although the big New York publishers turned her down, Benítez did get offers from three small publishers. Then it was her turn to say no.

She and her husband together made the decision to publish the memoir themselves, she said. All of the publishers, without exception, had said marketing the book would be difficult. “From which I understood that if anybody did take the book, I’d have to do the marketing myself,” she said. “If we’re going to pay for a big marketing campaign and do all that work, we might as well publish the book ourselves: then we can get, instead of seven percent or 10 percent, we can get 100 percent [of the profit.”

They set aside $10,000 to $15,000 for the venture. They formed a certified business, Benítez Books, and hired a copy editor, cover designer, interior designer and fulfiller (who mails book orders). Two thousand books were printed in Bloomington and released in February. As of April, Bag Lady: A Memoir is still available only through their company (www.sandrabenitez.com). It’s not available in bookstores yet, said Benítez, because they haven’t found a distributor.

Benítez is optimistic that the book will eventually take off, partly because it’s so unique—until now, books about inflammatory bowel disease have been mainly technical.

“There are no other books like it,” she said. “Mine is more about the psychological and social and, in a way, spiritual connection in accepting this new me. It’s a book that won’t be talking about treatments and medical plans and all that.”

If her past success is any measure of the future, she’s right to be hopeful. And one sign that things are running true to form: Hennepin County has already ordered several copies of Bag Lady: A Memoir for library branches.