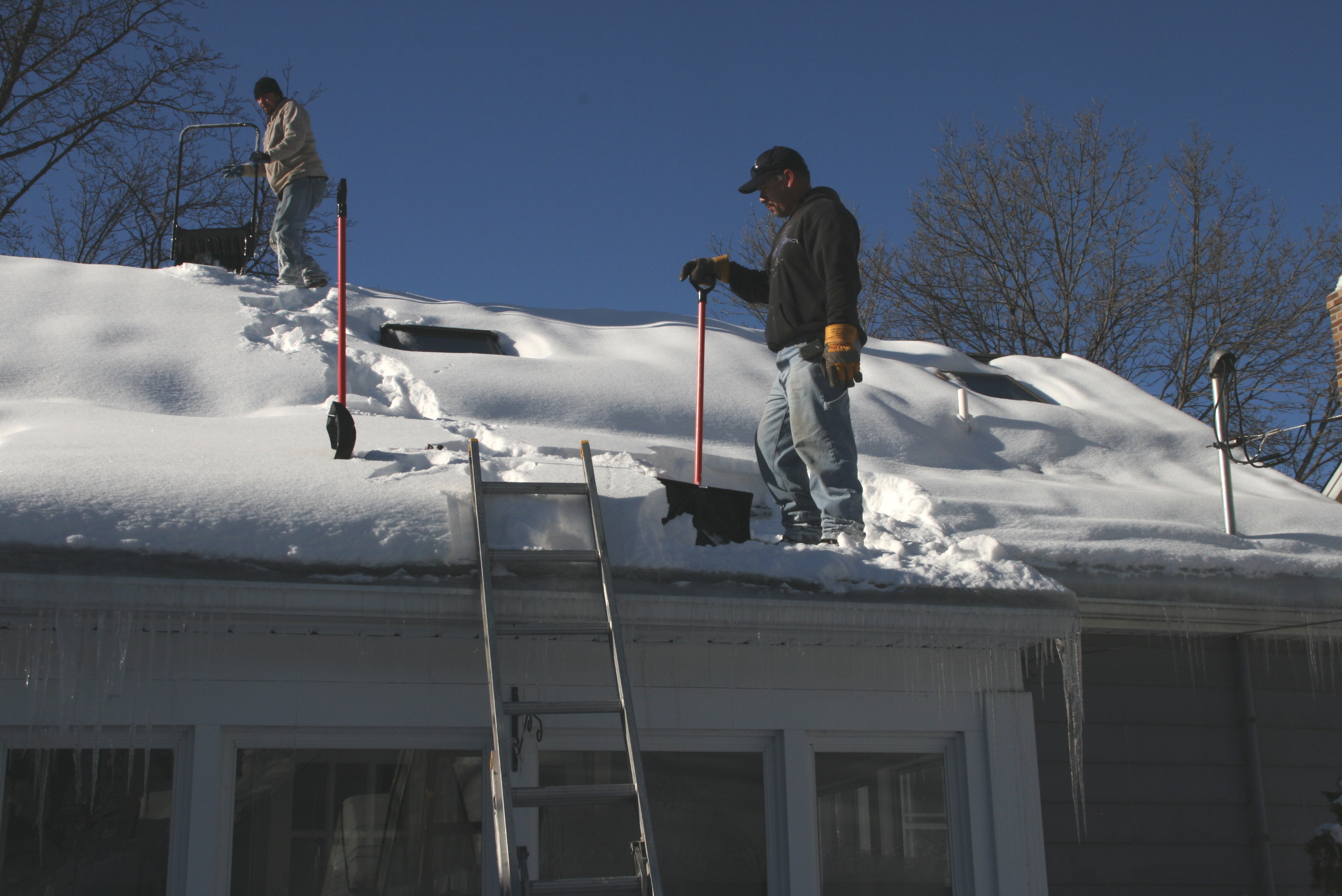 Much of the snow that fell in mid-December may have already melted in a late December rainstorm, but in thousands of Twin City homes the damage was already done.  Ice dams – the thick ridges of ice that develop when snow at the top of the roof melts, then refreezes at the colder roof edge – caused water to back up, then seep into houses across the metro area, causing cosmetic and structural damage.

“We’ve gotten call after call,” said Jose Salazar, a project coordinator for Sela Roofing and Remodeling from his perch on the roof of an 11th Ave. home in Minneapolis where he shoveled snow.  “We were getting a call every half-hour because of water leaking into the houses.  We’ve done 60 or 70 houses in two days. The worst is in Minneapolis, St. Paul and Edina, where they have older homes. It seems like 99 percent of the houses there have a leaking problem.

“A lot of newer homes are better insulated and have a better overhang.  In Woodbury or Bloomington, you’ll see only one out of 10 with a leaking problem,” he said, “But, even houses that hadn’t had a problem for 20 years are affected this winter.”

On 12th Ave., a few houses down from where Salazar was clearing snow,  Mary Meyer tried to get workers to come to do the same to her roof. “I called a number of different places and they’re all scheduled through a week from Thursday,” she said. “I raked the roof and put salt up there. We had the house re-roofed with an ice and water shield and that seems to have helped, but I’ve got two spots on the ceiling where it was leaking.”

Across the river in St. Paul, Neva Banaei, who lives in a Hubbard Ave. bungalow near Newell Park said that in the 23 years she’s owned the house, she’s never seen it this bad.

Banaei called her neighbor Gregory Faulkner, a roofing contractor, for help. “He shoveled and put down calcium chloride,” she said. “I still have an ice dam, the biggest I’d ever seen. It’s not leaking in the house anymore, but you should see the icicles. They’re lethal.”

“This is an old house, but the roof is only six or seven years old,” she said.  “It was dripping in the kitchen, on the counter. Then it started dripping on the opposite side of the house, on the hardwood floor. I was standing in the bedroom, crying.  No one in this economy can afford this kind of damage. I’ve have friends telling horror stories of people coming out with steam at $360 an hour.”

Faulkner,  who has been removing snow and ice from Twin Cities roofs since 1974 says the main difference between using steam to melt ice or shoveling a roof by hand is cost – an average of $300 for a crew to shovel verses $1,000 for steam. “It’s possible that steam is more effective, but it may be overkill,” he said.

Faulkner said many homeowners can do the work themselves, starting with using a roof rake, leaving about an inch of snow so as not to damage the shingles. Clearing snow from around roof vents will allow warm air to escape from the attic and will equalize the attic and outside temperatures, helping to prevent the melting that causes the dams.

But, he said, the water intrusion won’t be solved until channels are created in the ice dams. “You have to channel the water by carving a groove every five to six feet, then pack in ice melt tubes.  If the roof is flat enough, I pack them behind the ice dam. If the roof is a little steeper, I lay them up on the roof at the channels. It makes something very similar to a lava tube where water can flow underneath.”

While Faulkner uses gunny sacks to make his ice melting tubes, a popular and effective method is to use the legs of pantyhose filled with calcium chloride. A quicker but more expensive solution is to use a product like Roof MeltTM,  hockey puck like tablets which can be tossed on to the dams.  Faulkner recommends using only eco-friendly chemicals such as calcium chloride, which he said, won’t harm vegetation, pets, or rivers and lakes.

Those looking for a long-term cure for ice dams need to consider adding extra insulation and keeping the space below the attic airtight to prevent warm air from escaping and melting the snow. Rain gutters should be checked to make sure they were installed with a gutter apron. Without an apron, the water can pour over the back of the gutter and leak into the house.”

Faulkner said he does not advise attaching heating coils to the edge of roofs. “You’ll just have secondary ice dams above the heater cables.  But instead of leaking at the edge of a room, the water will hit the TV or the oriental rug,” he said.

Although ice dam crisis caused problems for many, it seems to have brought out the best in some Minnesotans.

Charlotte Petersel, who lives in the Nokomis neighborhood, was at home recovering from cartilage surgery after a fall at the dog park, when she noticed the sound of water dripping inside her house. The ice dams had caused a leak into the living room, causing water stains and blistering paint.  Still using a cane, there was no way she would be able to climb a ladder and fix the problem.

But, a few of  her neighbors came to the rescue, climbing on ladders to remove the ice dams and spreading ice melt. “I’m amazed,” she said. “They worked for three days. I didn’t ask them to do this, but there they were.  I don’t know what I’d do without my wonderful neighbors.”