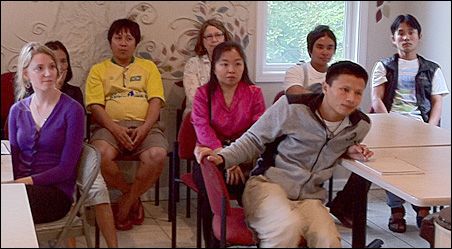 Day Wah sees the alarm on their faces and hears it in the voices of many of the refugees she works with. They fear this thing called a government shutdown all out of proportion.

“They worry they will have to go and live on the street,” or something worse, Wah tells me, a slight Karen woman with the important job of translating the strange customs and realities of the world we know as Minnesota to the Karen, refugees from Burma, for a program called MORE Multicultural School for Empowerment in St. Paul.

All they know is the news of a possible “government shutdown” that comes to their mailboxes on official government white paper in foreign, black-lettered words.

“They worry. Some people [do] not sleep all night; they cry.” They stockpile food, wonder how they’ll pay their rent or for medical care, says Wah, 27, who came to the United States about four years ago from a refugee camp in Thailand.﻿

Even as long-time Minnesotans all over the state struggle to understand the ramifications of a possible suspension of what could be a wide range of government services July 1, some in its substantial refugee populations — survivors of torture, rape, genocide and broken societies — fear the worst: looting in the stores and mayhem on the streets, because they’ve known such consequences of a lack of government in their homelands.

“We have found a lot of lack of understanding among our clients about government services. Many come from places where government has been their persecutor,” agrees Tom Cytron-Hysom, chair of the legislative committee of the Literacy Action Network. Member organizations see a huge increase in the number of Karen refugees, “many hundreds,” coming for English classes, he says.

Minnesota has a national reputation for welcoming refugees, including the Karen, (pronounced ka-REN). They are an indigenous ethnic minority in Burma (also called Myanmar), a mountainous country wedged between China and India and ruled by an authoritarian military leadership. Reportedly, more Karen have settled in St. Paul than any other city in the United States. The community here is about 3,000.

It’s because of them and other refugees coming to MORE for services that Cathy Patterson, executive director, contacted me. People have to know how decisions at state government are impacting new Minnesotans, she says. Her organization agency served more than 350 last year.

For the last week, she says, Karen, Hmong and other refugees and immigrants have brought in to have translated official state notification of possible suspension of health services, child care assistance, personal care attendant payments, and other benefits paid out by the state. They worry, too, about payments from the Minnesota Family Investment program, the state’s version of welfare.

Only that morning, Patterson said, a staff translator had heard: “If Minnesota shuts down, maybe I should just be sent back to Burma,” the speaker fearing Minnesota would end up worse than the place where the Karen people have been persecuted and their lives threatened. 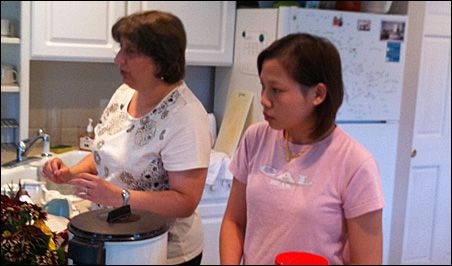 “I scared. No paying the rent,” Sa Ka Paw Htoo, told me. From Burma, he found his way here recently after 10 years in a refugee camp and three years in Texas. Now he’s studying English at MORE, a nonprofit.

Twice Wednesday the organization gathered together people coming there for English classes or seeking mental health services, general advocacy or assistance with other basic needs, to explain the state’s budget situation as best they could.

In the afternoon, 16 people, including Hmong and Karen translators and an English teacher, gathered in a kitchen meeting room in the house skirted by rain-drenched peonies on the edge of St. Paul’s McDonough public housing village.

“We’re meeting because we’re hearing a lot of questions and a lot of worry about the government closing down for awhile. We want to talk about it,” began Sister Stephanie Spandl, a social worker with the program and a member of the School Sisters of Notre Dame. A nonprofit had to explain what the government had not.

Just as families are having a hard time right now making ends meet, so is the state government, Spandl said, describing the political standoff between a Republican Legislature and a Democratic governor with different ideas about what programs and services are necessary and how to fund them. She told listeners the courts have been asked to rule on exactly what the state’s obligations are during a shutdown, that this kind of thing has happened before, that it was peaceful and that it lasted a short time in the past.

‘You won’t be alone’

Spandl stressed, “You won’t be alone” — and offered a variety of problem-solving suggestions, speaking for more than 30 minutes.

MORE can help, she said, providing free bread and other food on Fridays, clothes on Saturdays and advocacy help other days. She suggested people help each other, too, by forming babysitting coops, for instance, so they can continue going to work or school, that they use emergency food shelves if food stamp payments are unavailable.

She covered a range of concerns, citing information gathered from English-language news media and sources with the Minnesota Council of Nonprofits.

Some small businesses such as those providing foreign-language translators or personal-care attendants might have to close temporarily, she explained. Enlist friends to help if possible, she advised.

“You’re not going to lose your housing right away” if you can’t pay rent, she said. Turn first to family or friends to see if they can lend you money, and if that doesn’t work, try talking to your landlord promising to pay as soon as you receive your housing assistance.

For medications, see if the pharmacy will issue next month’s prescription now. (MORE might be able to help with that, too, Patterson said.)

If you’re sick, go to your doctor, Sandl advised. Most likely the doctor will care for you, trusting he or she will eventually receive state reimbursement, she said. “If the doctor says ‘no,’ go the E.R.”

As for funding for MORE in the event of a shutdown?

For July it means missing a $50,000 payment for Adult Basic Education to teach English classes, Patterson says. “Also, there’s no guarantee that services that occur during the shutdown will be reimbursed,” she said.

“We will help each other,” Wah says.