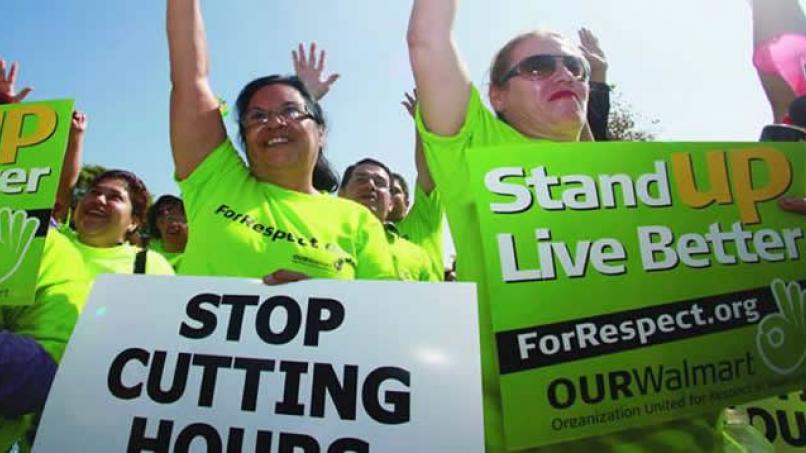 Walmart workers are standing up to demand respect and their fair share of the giant retailer's profits.

Workers in more than a dozen cities, including St. Paul, plan protests Thursday against Walmart’s treatment of its employees. Organizers expect thousands to participate in the demonstrations.

“Walmart workers bravely went on strike in June to defend their coworkers’ right to stand up,” organizers said in announcing the event. “Instead of listening to them, Walmart fired and disciplined more than 70 workers for going on strike.”

OUR Walmart, an organization formed by employees, is sponsoring the demonstrations. The group set a Labor Day deadline for the giant retailer to reinstate fired and disciplined workers, publicly commit to improve jobs and end the company’s pattern of violating worker rights.

“Walmart, we cannot wait any longer for you to do the right thing for American workers. Our jobs should not be at risk when we speak out about improvements that would help our families and Walmart customers,” said a Cindy Murray a Walmart worker who was recently arrested for protesting at Walmart’s Washington, DC offices.

Murray has worked at Walmart for 13 years. “Walmart employees like me are not making enough to support our families even though we work at the country’s largest company.”

Many Walmart workers continue to earn poverty-level wages of $8.81 an hour, despite misleading claims from Walmart that wages are higher. A Congressional report released earlier this year calculates the Walmart workforce reliance on public assistance including food stamps, healthcare and other needs is estimated to utilize $900,000 per year of taxpayer funds at just one of the company’s 4,000 stores.

“As the nation’s largest employer, Walmart and the Walton family should be raising standards, not lowering them. To whom much is given, much is expected,” said Kim Bobo, executive director of Interfaith Worker Justice. “Walmart should share its prosperity with workers and publicly commit to paying workers $25,000 a year for full time work. If Walmart workers earned living wages the entire economy would benefit.”