When I was a child and someone called me a name or said something hurtful I shielded myself with these magic words . . . “Sticks and stones will break my bones but names will never hurt me.” Brave and sometimes helpful though these words were, they weren’t true. Words really can hurt us deeply. We realize as we grow that in fact words are powerful and that the words we choose matter. We learn that there are evocative, racist, sexist, or hateful words that shouldn’t be spoken.

My Grandma referred to African Americans as “nigros”, which I thought was appallingly close to a really bad word and mortified me every time she said it. At first I cut her some slack, allowing for the fact that she was an older woman (born in 1900) unaware of how the words describing race had changed in her lifetime. But then my brother dated a woman from India and Grandma asked, “But isn’t she a nigro?” It confirmed my suspicion that the word wasn’t spoken in innocence. In Grandma’s mind the word “nigro” meant someone who is outside our acceptable circle. It was an ostracizing word that made clear that we white people were different, that we were better.

The word “illegals” has similar power. It connotes the idea of people who are far outside our circle of acceptable friends. We, the “legal” ones, are better than they are. When I think about the word “illegals” the first thing that strikes me is that it is a descriptive phrase that has been turned into a noun, which has happened only recently. When I first started practicing immigration law over twenty years ago no one ever referred to “illegals”. They might be “undocumented people”, “people without papers”, or even the offensive “illegal aliens” (how’s that for a phrase connoting outsiders?) but never just “illegals”. The use of nouns to distance ourselves from other groups of people is common. Overweight people are “fatties”. Homosexual people are “homos”. We recognize, however, that these words aren’t polite or kind and most of us know better than to use them.

We do call people who’ve committed crimes “criminals” because they’ve engaged in behavior that divides them from polite and civilized society. Ostracizing them is considered ok because they’ve done something bad. They deserve it, at least up until the point at which they’ve paid their dues. A friend of mine who is never soft on crime once argued that it is ok to call undocumented people “illegals” for the same reason that we call people “criminals”. Reasoning that the undocumented people among us have committed crimes, which is what has made them “illegal” in the first place, it is acceptable to shun them.

So let’s examine what crimes have been committed by those who are unauthorized to be in the U.S. Those adults who enter the U.S. without inspection have committed a federal misdemeanor which carries a fine of between $25 and $250 or a maximum imprisonment of 6 months. As such, it is a Class B federal misdemeanor, a petty offense which is on a par with a first time DUI. There is no crime greater than this for first time offenders. (Do we brand those who have first-time DUI’s as “criminals” or do we look upon them more as petty offenders, who can redeem themselves and learn from their mistakes?)

For the vast majority of unauthorized people, however, it is critical to realize that NO crime has been committed. As my colleague Dan Kowalski argues eloquently, citing Keith Cunningham-Parmeter and his excellent law review article, Alien Language: Immigration Metaphors and the Jurisprudence of Otherness, “[N]early half of all people described as ‘illegal aliens’ obtained their ‘illegal’ status by overstaying valid visas — a civil immigration violation that involves no criminal conduct whatsoever.”

Add them to the groups of people who were brought to the U.S. as innocent children, the asylum seekers who are awaiting their day in court, and the students who have failed to maintain their full course of study and you have a group far larger than those Class B petty offenders, all branded as “illegals” who have not committed any crimes.

The other thing at play here is race. If you close your eyes and imagine a person who fits the word “illegal” I would bet that you don’t envision a Canadian (even though we see plenty of Canadians who’ve wandered south and for a variety of reasons have never gone home.) As Keith Cunningham-Parmeter says, “Through metaphor, the immigrant becomes the alien, the alien becomes the illegal, and the illegal becomes the Mexican.” This is why nearly half of all Latino voters polled find the term “illegal immigrant” offensive. We’re talking about Latino U.S. citizens who feel this way, which is something politicians would be smart to pay attention to. 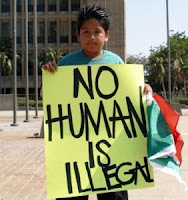 If you still don’t believe a metaphoric link has been created between Latinos and “illegals”, watch this clip of the Southern Mississippi Band chanting “Where’s your green card?” as a (very legal) Puerto-Rican born player from the other team shoots free throws. It is likely no coincidence, either, that this happened within hours of the Mississippi house passing an Arizona-style immigration bill.

In response to the racism and hatred that the word “illegals” engenders, the on-line magazine Colorlines began a campaign two years ago called “Drop the I Word”. Even though this word remains pervasive in our media, the 7800-member Society of Professional Journalists recognized its powerful, insidious effect and voted to drop it last fall. We can do our bit too and take the pledge to relegate “illegals” to that obscure place where my Grandma’s offensive word “nigros” now rests. I just did.