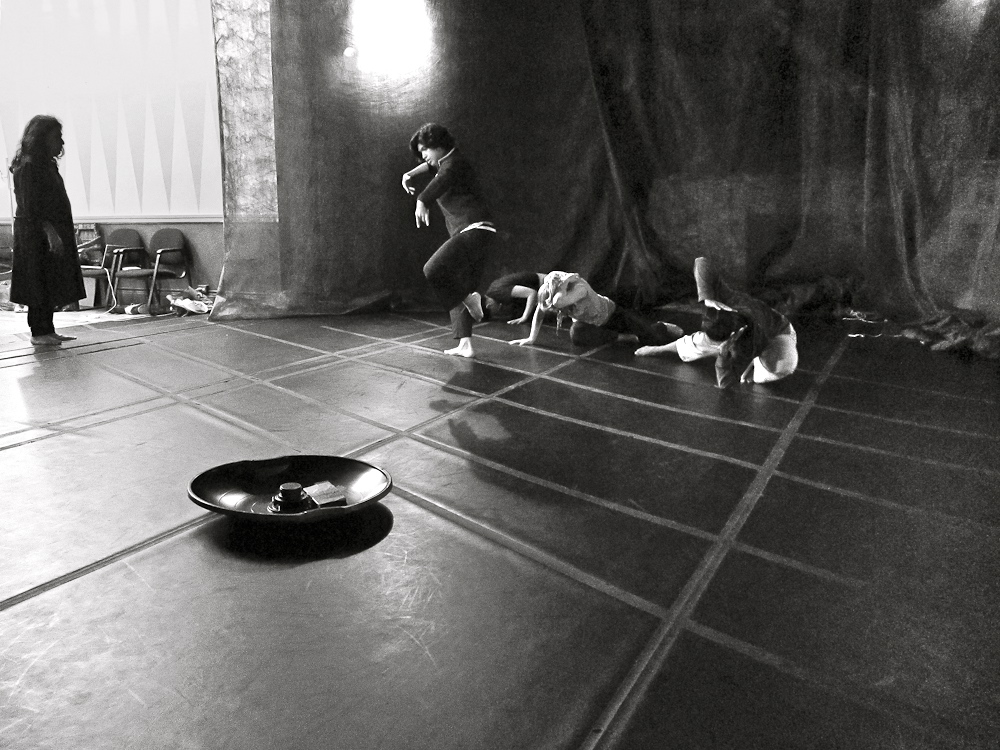 Dipankar Mukherjee works with Pramila Vasudevan and the dancers from Words to Dead Lips. Photos by Amy Danielson.

This weekend, Aniccha Arts, a company that merges media and dance, presents a performance that takes on what the artists call “an ecology of fear” in our society. Predicated on the idea of crowd control and the politics of sound, Words to Dead Lips explores the dimensions of how a climate of fear can shape and form a crowd, and how individuals, or groups of individuals can fight against that force.

The show was originated last year by choreographer Pramila Vasudevan and visual artist Matt Wells, who presented a shorter version of Words to Dead Lips at Pillsbury House Theatre. The show has expanded and deepened in the past year, with added collaboration from sound designer John Keston, director Dipankar Mukherjee (from Pangea World Theater), dramaturge Jasmine Kar Tang, and dancers Sarah Beck-Esmay, Chitra Vairavan, and Kayva Yang.  The latest version is being presented at Intermedia Arts Nov 5-7 as part of Intermedia’s Catalyst Series, a new program dedicated to collaborating with partnering artists and arts groups working to change communities and exploring experimental creative processes.

Vasudeven was trained in traditional Bharatanatyam dance, which comes from southern India, and has been a principal dancer for Ananya Dance for six years over a ten-year period. Part of the mission of her company, Aniccha Arts, is to establish an integrated space of dance and media. The company searches for creative relationships between movement, visuals and sound, and seeks interaction between the audiences, performers, and media.

Visual Desinger Matt Wells said that when they originally staged the show last year, they narrowed the concept down as much as possible, so that it was almost a personal narrative with an anti-war sentiment. In shaping the show recently, he said, it has turned into a larger conversation about choice at the systemic level. “How do we discover this ecology of fear which is a lack of choices?” he asked. “How do we remember the soldier who has no choice?”

In the show, the dancers use a combination of classical Indian dance, modern dance, and yoga movements. They are controlled by an oppressive environment, created by invasive sound, designed by John Keston and by visuals projected on a scrim. The projections, created by Wells, are basically recorded drawings, using screen capture software, and later edited. The intricate drawings resemble city planning maps or electrical wiring grids, and as time goes on, they grow and become more dense and expansive. 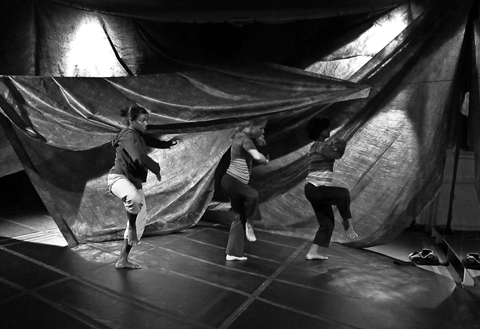 Eventually, the scrim itself begins to take over the space, and the dancers find themselves enveloped by it. I attended a rehearsal last week when they were working on the last scene, where the dancers are able to fight against the powers that control them. The dancers were working with Mukherjee to figure out how they were going to transform fear.  They explored manipulating the scrim, weaving in an out of it as they stomped, slid, and gestured precisely with their hands, curved their legs with flexed feet, and undulated their torsos. “Feel it, touch it, smell it,” Mukherjee directed the dancers. “This is your home.”

Meanwhile, Vasudevan was working on how best to relate to the cloth, initially just feeling it but then manipulating it. She also instructed the dancers on how to move with their feet. “We are learning to own our environment,” she said, as she tried out a few techniques of walking that involved staccato kicks.

Mukherjee and Vasudevan have collaborated on various projects together for the past ten years, when Vasudevan began choreographing her own works. Though Mukherjee is a theater artist, he has training in Kalari, an Indian martial art form, and is interested in performance that is physical.Both artists are interested in work that is political, and interactive. “We’re still divas,” Vasudevan said jokingly, “but we all know how to negotiate.”