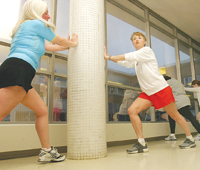 Members of an all-women running class stretch out at the Edina Community Center after a run.

Gloria Jansen can see the benefits of running as she jaunts past people in the downtown Minneapolis skyways. “I feel like I get around a lot better than people younger than me,” said Jansen, a wiry 58-year-old with a head of fluffy brown hair.

That’s not surprising. Jansen teaches one of a handful of all-women running classes offered in the metro area. Along with three other coaches, Jansen works with women of varying ages and abilities, teaching them how to run right and how to become more physically fit.

Her class meets once a week at the Edina Community Center. Each session begins in the cafeteria, where the women meet to stretch, matching their movements to the coach’s instructions. Among the 35 or so women who come each week, there are mothers and their daughters, coworkers and women who start out as strangers and end up running buddies. When they have limbered up, the coaches divide the women into running groups. Every runner sets her own pace. The groups circle Lake Harvey, a small, shallow lake surrounded by large homes. They run around families out with their children and people walking their dogs.

At the beginning of the program, the women walk for five minutes and then run for one minute. On this day, the middle group’s goal is four minutes of continuous running. Their coach’s instruction to resume walking is met with sounds of relief. By the end of the six-week course, most students will be able to run for 30 minutes at a time, and some will go on to run in 5K races.

Jansen began running in 1985 with a friend. She was averaging 12 to 15 miles a week until 1989, when she decided to train for her first marathon. In 2000, she began coaching the class for women who want to start running or who are looking for a running community.

Running benefits
Running is one of the more popular forms of exercise, perhaps because it ranks towards the top of the list for burning calories. Most runners take up the sport to manage their weight. Running also prevents muscle and bone density loss that accompanies aging, increases lung capacity and boosts the immune system by raising the concentration of white blood cells.

Despite the benefits, Jansen said many women say they can’t take time out of their busy days to run, or they think running is too hard. Jansen’s class tries to counter these concerns with instructions about technique and by helping women set aside a specific time for themselves and their bodies.

Cheryl Schneider is one of those who has trouble finding time for herself. Schneider used to run, but lately her busy publishing business has kept her tied to her home office. Schneider estimates she spends 10 to 12 hours working every day. “The question is, ‘When am I not at my desk?’,” she quipped. Jansen’s class has given her a chance to get out from behind her desk and spend time in a friendly environment that has helped her stick with running. “I like the accountability of the class. It is a big deal to make the goals and it feeds on itself,” she said.

Group effort
Jansen has also discovered that many women are apprehensive about running alone. “I think people are afraid of not measuring up and doing something unknown,” she said.

Bonnie Ashmore, who coaches the sister running class in Maple Grove, sees similar concerns. “It’s very motivating to run with a group. Some people need that,” she said. “We talk about how running can help you from a physical, mental and social standpoint.”

Ashmore’s class meets once a week at Maple Grove Senior High and emphasizes many of the same goals and topics as Jansen’s. Both classes focus on setting achievable goals and offer guest speakers on topics like nutrition, injury prevention, safety and proper running attire. The women learn how to avoid stress fractures and shin splints, and the importance of weight and cross training. Jansen also emphasizes the importance of a good pair of running shoes. On this day, Jansen’s class listens to a guest speaker from Run N Fun, a local specialty shoe store.

How the shoe fits
According to the American Academy of Orthopedic Surgeons, 60 percent of a shoe’s shock absorption is lost after 250 to 500 miles of use. They suggest runners replace their shoes every nine to 12 months, depending on how much running they do. Women should look for shoes that have good shock absorption and construction that supports the foot, Jansen counsels. They should also buy shoes at the end of the day when their feet are the largest. She tells her classes that, in order to get the best shoe for their foot type, they should go to local specialty shoe stores that cater to runners. (See sidebar.)

In addition to practical information, the all-women classes provide a positive, comfortable and relaxed environment. When she first started, Jansen said, she “found that women didn’t want men there. They didn’t want to be in classes with men because they weren’t comfortable with their bodies.”

As the class progresses, the women develop a sense of camaraderie. As they pass one another along the route, they clap, cheer and exchange smiles. Everyone has a partner to keep pace with and chat.

Running may be experiencing a renewed popularity. Ashmore says her class has one of the highest enrollments among all of the community education classes offered in Maple Grove, and at one time the Edina class had as many as 200 women. “I can’t help but feel there is a resurgence with running. It does seem like nationwide, running is becoming more mainstream,” Jansen said.

Discuss the pros and cons of running in the “Sports forum”:https://www.tcdailyplanet.net/forum/69