Members of the "Millennium Generation" discuss stereotypes about their age group at a general session.

More than 100 women, most of them union members, gathered in late April for the second Minnesota Union Women’s Leadership Retreat sponsored by the University of Minnesota Labor Education Service. The theme of the educational event was “Coming Together to Build a Better Future.” Participants learned more about the economic challenges facing workers – especially women – and discussed ways to bridge racial and generational differences to achieve solidarity.

Kris Jacobs, executive director of the JOBS NOW Coalition, presented some sobering statistics on the current recession. Currently, job seekers in Minnesota outnumber the available full-time jobs by 10-1, she said.

The greatest employment growth is in low-paying, service sector work. Jacobs demonstrated the Coalition’s “Family Wage and Budget Calculator,”, which shows a family of four with two working adults and two children would need to earn at least $14.03 an hour to cover basic needs. Nearly 40 percent of the jobs in Minnesota pay less than that, she said.

Women, while continuing to perform the majority of work to maintain their homes and families, still lag behind men in terms of overall pay, Jacobs noted.

At subsequent sessions, participants discussed how organizing unions and forming coalitions to advance progressive policies can raise income and improve life for all workers. Macalester College Professor Leola Johnson led a conversation on ways race is used to divide people; then participants split into generational groups for a discussion of the stereotypes surrounding age. 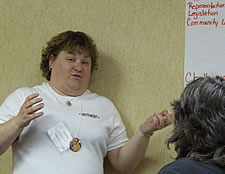 Retreat participants came from across the state and from many different unions. “I always feel refreshed energized spending time with my union sisters,” said Susan Kreitz, a Minnesota Nurses Association member from Stacy.

Added Diane Ersbo, a member of Teamsters Local 638 in Minneapolis: “To be connected with like-minded others, encouraging one another, listening and sharing, to realize that I am not alone in the struggle, gives me courage and strength to reach out and speak out for justice.”

The retreat was part of an on-going series of women’s programs sponsored by the Labor Education Service. LES holds the retreat in odd-numbered years, with shorter programs offered in the interim. For more information, visit the LES website, or call 612-624-5020.