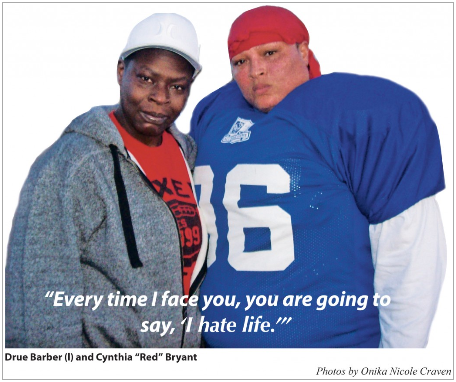 Women have been playing full-contact football in Minnesota for over a decade. They practice twice a week, often after a full-time day job, and then play on Saturdays during the spring and early summer. They play because they love the game and to prove a point: Women can do anything.

Formed in 1999, the Vixen plays in the Midwest Division of the Independent Women’s Football League (IWFL), a 51-team league with over 1,600 players across North America.

Since its founding in 2000, the IWFL “is the highest level of football women can play. We play [by] NFL rules, but modified slightly,” says Drue Barber. “None of us get paid. We all have full-time jobs. A lot of us have kids. You don’t keep coming back…putting all this strain on your body for anything else but the love of the game.

“Women love football, too,” Barber points out. “There’s no reason why women shouldn’t be able to play it.” She and Bryant are among the six Black players on the 35-player roster.

Bryant is an unashamed, hard-hitting grandmother. “I’ve been playing 14 years, since 1999. I’ve knocked a couple of girls out. I think I hit just as hard as [a man],” says the veteran defensive lineman.

“She’s the hardest hitter” on the team, says Barber of Bryant. “I’ve been hit by her many times, and I survived without any injuries. But there have been people hit by her and crumbled.”

“Every year I got to enhance my game,” proclaims Bryant, “to get stronger and quicker, because I know I’m going against at least two or three players on that line. They’re 340 — I weigh 330.” 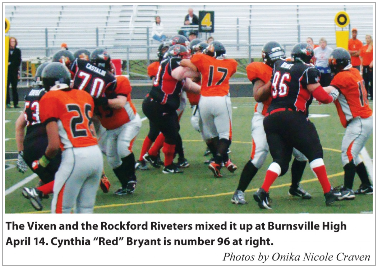 She was a Henry High basketball player, and it was hoops that got her into football. “I was in a pickup game at the Uptown YMCA, and I was coming down the court. The [opposing] coach told the player to take a charge, and she said, ‘Hell no, she’s coming through like a freight train.’ After that, I was asked to try out for the team, and I did.”

“We had people come from Florida, Seattle and California,” recalls Bryant of the tryouts that had nearly 80 women participating. When a coach told her that she had no chance of making it, “I told him, ‘You know what? At the end of this, you can guarantee that my name will be the first one on that list.’”

Bryant is a multiple-time IWFL All-Star. “I’ve been MVP four times, player of the year six times, and an all star eight times,” she says proudly.

Barber has been a Vixen defensive player since 2000. “They wouldn’t let me play [football] in high school,” recalls the Minneapolis native. She first heard about the team after listening to an ad on a local radio station, then tried out and made the club.

“I’ve played defensive end, but I also can play any position on the defensive end of the field: safety — free and strong. I’ve played corner and linebacker,” says Barber also with pride. “I’m highly aggressive and very fast.”

Barber says that she’s looking forward this season to playing defensive tackle alongside Bryant. “You put both of us on one side, there is no offense that can stop us,” she pledges. “You have to make a choice — her or me.”

“I love to practice and I love to hit,” she admits. “I steer it back a little bit because they are my teammates. But in the game, I have to have the mindset of being the hammer and not the nail. I love to be the hammer.”

Both women are offended by novelty teams like lingerie football. “It’s not a real sport — it just brings women [athletics] down even more,” says Bryant.

Instead, these women play football the way it’s supposed to be played. “It’s not about making money, the status or the fame. This is a sport we want to play, and we’re good at it, too,” notes Bryant.

“You know you are going to be hurting on Sunday,” adds Barber. “But you can’t wait for [next] Saturday’s game to go out there and do your best.”

When she lines up, Barber says she likes to instill fear into her opponent. “You can’t stop me,” she affirms. “Every time I face you, you are going to say, ‘I hate life.’  I’m going to make you miserable, but I don’t play dirty or play cheap.”

But all that talking and hitting stays on the field. Afterwards, both teams usually go out to dinner together.

“We are one of the few [IWFL] teams that do it,” says Barber. “We don’t want to build bad blood, but build rapport — we want this league to grow and want more women to play football.”

The two women also see themselves as role models for young girls everywhere.

“When I get done playing a game, and I see those little girls out there cheering for me,” says Bryant, “they look at you and say, ‘I want to do that when I grow up.’ That’s a grand feeling, and it makes me feel great.”

Both Barber and Bryant love the fact that they’re making history. “We’re paving the way for young women to come out and do this,” says Bryant. “I want my granddaughter to grow up knowing that she can do anything she wants to. Nobody can tell her what she can or can’t do because she’s a woman.”

The Vixen last Saturday defeated Rockford 44-0 in their season opener. Before the game began, a smiling Tonita Cochran, one of the five female team owners, proclaimed.  “On a day like today, you want to hit somebody.”

She joined the ownership group three years ago after she retired as a player in 2009.

“We are one of the few [IWFL] teams owned by women. Every year we survive —it’s something everybody said we could not do.”

Like her players, Cochran also sees herself as a role model. She often has to remind herself, “There are little girls, and little boys watching you.”