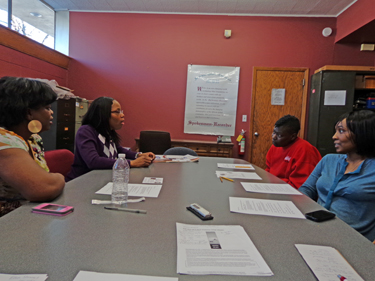 Among my constant complaints about sports radio, besides its overbearing White male testosterone presence, is the absence of women voices. Even when White females are heard, they often act Gracie Allen-like as foils for the George Burns-like hosts.

You won’t hear on sports radio someone like Jemele Hill, a Black female sports commentator who speaks her mind.

Black women can and do talk sports.

Although several topics were discussed, the one that drew the most spirited talk when asked was, “Are female athletes treated the same as their male counterparts?”

DB: That is just the perception across the board everywhere across America. If you are a college male athlete, you are allowed to do more and get away with more because you’re a male athlete. Whereas women — we already know that women are going to do what they need to do to take care of themselves, make sure their grades are taken care of.

ES: When male athletes come [for a campus visit], they have the “Polarettes,” and those women are there to entertain. Women don’t get that [laughs].

OC: Part of why [males] are treated differently [is] because they bring in more of the revenue. The idea is that these men are going to bring in the revenue to bring that school to a higher level financially.

ES: I remember when I was at the “U” our pre-game meal was at Stub’s and Herb’s. The men on the night before their [home] game stayed at the hotel and got their meals at the Radisson Hotel. We didn’t stay in any hotel before a home game.

CF: The men [then] got training [meal] tables every single night, and we had to get back to the dorms. I’d like to know the differences now.

ES: I remember when we played for the Minnesota Stars [a former women’s pro basketball team in the mid-1990s], and we traveled to road games in two minivans.

DB: The difference between my league [the Women’s Professional Football League] and the NFL is staggering. We don’t get paid at all; we pay to play. The team owners recruit world-class athletes, and some teams get paid, but never on a scale like the NFL. You’d be doing good to get $1,500 for a season.

CF: You mean some players get paid and some don’t — in the same league?

DB: It varies on the team. The Pittsburgh Steelers is the only NFL team that actually owns a women’s football team. They play at Heinz Field, and Hines Ward is the head coach.

ES: I have a hard time thinking where women have an upper hand. Other than women having the babies, that’s the only thing we can do that men can’t do.

OC: When men refer to the women’s sports, it’s a girl [sport].

CF: I listened to [a local sports program] a few weeks ago while driving, and he said “Britney Grinner” [referring to Britney Griner] and nobody corrected him. This morning I’m driving again, and [the announcer] said he would give Britney Grinner a chance. I said, “Hold up. Somebody really needs to tell him that it’s ‘Grine-er’. He said [it wrong] every time I’ve heard him — I don’t know how many times he did it.

ES: Good for you.

DB: They say girls can’t hit. First of all, I’m not a girl. Since you want to make me a girl, I’ll show you what a girl can do. I’m very passionate about my sport. I will hurt you. Last year I broke a player’s leg in three places [after a hit during a game]. She had emergency surgery before our game was done. I didn’t mean to hurt her — it’s part of the game. I didn’t plan to do that — it’s a collision sport. Every time I take the field, I have a high chance of being hurt.

These women would’ve kept on talking — and in fact they did continue outside after closing time. They promised each other and me that this would not be the last time they get together to talk sports. In fact, they said the next time they are going to bring some more Black women.