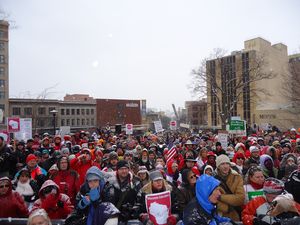 Editor’s note: A friend from high school days in St. Peter was posting status on Facebook from yesterday’s massive rally in Madison. I asked her to write up her experience for Bluestem, and she posted a Facebook note for me to republish here. I’ve lightly edited the draft for the eye and for mechanics. A big thanks for a Wisconsin citizen’s view of the rally.

I just got back from a day of peace, love, solidarity and frozen toes in Madison with 100,000 people! Marched around the square with my sister-in-law’s union: she’s a nurse.

At the start of the day I wasn’t sure what to expect; when we got to the mall to take the bus there was a line of people waiting that began at one store front and went around the corner and down the sidewalk two more storefronts. The line was broken in a few places where people had politely moved away from the store entrance paths to allow the customers to enter.

The crowd was happy, almost giddy with anticipation. Shoppers were driving by hanging out the windows of their cars cheering us and honking their horns. It felt like I was in a parade. We waited about an hour for our turn to board the bus. They let us fill up the bus and pack in like sardines.

An elderly woman looked around and said, “Democracy is crowded.”

Everyone was so polite, kind, and respectful while waiting in long lines and at the rally. The only ones who weren’t were the two men who drove by the throngs of people waiting to get on the bus to the rally and yelled obscenities at us. People just smiled and let them drive. I loved it!

We were dropped off near the Capitol where the streets were filled with people. In one spot tables had been set up on the sidewalk and folks were grabbing a hotdog, bottled water or a coffee. There was a donation can nearby.

We headed to the meeting place for the SEIU union workers. Inside the building it was buzzing with activity. I heard discussion about collective bargaining, patient care and caseloads. We saw Tammy Baldwin speaking to some of the union representatives in the hallway.

It was standing room only as I listened to speakers including JoCasta Zamarripa, the first Latina to be elected to the state assembly, who spoke to this crowd of SEIU union workers, NAACP representatives, and other supporters from Wisconsin and Chicago. Her voice broke as she tried to control her emotions when telling about how she felt when she was denied her voice and her vote (when the Assembly speaker pro tempore suddenly cut off the debate and demanded a vote just after 1 a.m. Friday morning).

We moved outside to begin the march and I was asked to hold one end of the banner. I found myself out in front helping to lead the large group. The crowds on the sidewalks cheered, chanted and banged drums to show their support as we marched around the square. We walked slowly and as we were walking I scanned the faces and the signs in the crowd taking it all in. What I saw were lots of smiles.

I saw ONE person who was pro-Walker – ONE all day in that immense crowd. He stood quietly on a street corner holding two signs as the people wandered all around. Later on the ride home, I talked to some riders on our bus about this and they said they only saw five, and those five were standing right in front of the FOX news cameras.

I saw young people and old people, a few children, even a few dogs in the crowd.

We stopped in front of the steps where the rally was set to begin, and climbed up the hill a bit to get a better view. There were young people who had climbed the trees for a better view. I saw what looked to be TV cameras covered in plastic and set up on a platform; there were several of them, and they appeared to be filming the crowd and the rally.

While I stood listening to the speakers I scanned the crowd around me, several times I looked back to the Capitol building, I had never been so “up close and personal.” Looking up I saw the Capitol’s dome, the huge white columns and bronzed accents. The flag was flying on the platform in front, with the capital as the backdrop and large fluffy snowflakes falling. My sister-in-law looked around and said she felt like she was in a snow globe.

Before the speakers had begun, the crowd sang our national anthem.

The speakers included  Jeffrey Skiles, the co-pilot on what is now referred to as the “Miracle on the Hudson.” He spoke for pilots and teachers, and talked about how Wisconsin teachers had helped his son earn an ACT score high enough to get into UW Madison. He won’t be going he said, and explained, after a gasp went up from the crowd, “Because he’s in the eighth grade.”  Of his experience on the Hudson, he talked about how everyone worked together that day, the people who came and helped, “We are all heroes. And every one of them was a union member.”

Another speaker (I’m not sure who it was) said that Governor Walker was claiming we weren’t from Wisconsin, that they[ organizers] were busing in people from out of state and that Walker doesn’t know what Wisconsin voters look like.

I heard a little voice from behind me say, “Well… we’re all a little overweight.”

Many of the speakers echoed the same sentiment, saying “I’m standing in the house of labor.”

A UW Hospital nurse said, “Walker thinks that most of us are from out of state. Doncha know I’m not fakin’ this Wisconsin accent?” She added that she and some of her coworkers had come up with a new chant “Hey Gov, doncha know, the Pack says pack up and go!”

I think it was the same nurse who spoke about the importance of collective bargaining. She said – would you want a nurse who is just coming off 3 16-hour shifts to put your catheter in? That got a huge laugh from the crowd.

UW-La Crosse physics professor Eric Barnes talked about how they voted this week to form an AFT union with 87% in favor.

Mary Bell, president of WEAC, faked a phone call during her speech, pretending to talk to Governor Walker she said  “You have another call coming in? Well if an out-of-state billionaire is more important than a quarter million Wisconsinites…”

Peter Yarrow of Peter Paul and Mary was there speaking and singing. He told us, “The eyes of the world are on you. Do not stop! A voice had been raised. If you hang in there, you will kill the bill.”

Wisconsinite Bradley Whitford of “The West Wing” spoke, saying  “Thanks for coming out here to exercise those pesky rights. . . .This will not stand. The Governor has to understand that Wisconsin is a tough constituency. We fish through ice.”

He also said “When a governor puts the intent of the Koch brothers ahead, who fired hundreds while giving themselves $11 billion bonuses, and targets teachers, this will not stand.”

When the speakers were done, I overheard a man who was standing near me–he had a long grey ponytail and was taking in the immense crowd around him–say “Wow, this reminds me of the 60s, except the police weren’t protesting right beside me then.”

If it’s possible to be overpolite, this crowd fit that description. People were talking about it all day, “Excuse me, no after you, here, let me help you over this snow bank…”, standing in the beautiful snowfall, freezing our butts off and just enjoying the camaraderie. A woman I was with was approached by a young man who asked her where she worked, and when she told him she was a nurse, he proceeded to tell her all things that were important to him about her being a nurse.

For me the atmosphere was almost festival-like. There was always the continuous sound of the beating drums like a heartbeat to the crowd, but even with that the prevailing sound I heard was laughter. Not a mocking laughter, a genuine laughter that came from people who were truly happy to be there in the cold and the snow freezing their butts off for a cause they believe in.

Later we went to find the buses back and saw the lines stretching for blocks. As we walked past people waiting in line they smiled and said “it moves pretty fast.” We were wet and cold now, the snow having worked its way into our clothing, and as the wind picked up, the temperatures had started to drop.

While we waiting in line for the buses, a group of women who appeared to be in their twenties began to sing silly songs like “The wheels on the bus go round and round.” When they were done they looked around at the rest of us and smiled apologetically, saying, “We’re kindergarten teachers.”

New people came to join the line, politely asked where the end was, and then walked the three blocks to get there. No one taking “cuts.” Later as time dragged on and the lines didn’t seem to be moving much, the cars going by and honking their support were met with a few feeble woo hoo’s. We were spent. An elderly man standing in line in front of me looked around and said, “Where did those kindergarten teachers go? We could use them about now.”

They had caught their bus home. We estimated we stood in line for the bus for about two hours; it was dark when we boarded. It felt great to sit down. On the bus the conversation turned to what to do next, and where to get information. An elderly couple struck up a conversation with the group I was with. They said they were retired workers from LaCrosse, WI (about 130 miles away) who have been coming down to show their support. They said they felt that since they are retired they should come more during the week and that they have been.

In the end, the bus drivers were thanked, the crowd moderators were thanked, the people doing traffic direction were thanked, the police officers on and off duty were thanked. We were a polite and respectful bunch. The group I was with giggled about the level of politeness. It made me think of the cartoon characters, the little chipmunks “Chip & Dale” who keep saying to each other “After you,” “No, after you.”

Later when I got home, I was frustrated by the lack of coverage. As I flipped through the local stations I saw the news anchors just saying that the crowds continued to protest, no scenes, and no footage. The only footage I did see was of a Republican senator saying that there may be thousands at the Capitol, but he’s gotten thousands of calls from “people from Wisconsin” who support the bill. Barely any coverage of the immense crowd, the inspirational speakers, the incredible movement.

The media may ignore us, but i felt like I was coming home after a really great party. What a wonderful day of happy, optimistic, and unified people.

About the author: A graduate of St. Peter High School, Kris Fultz lives and works in central-ish Wisconsin. She last contributed to Bluestem Prairie in 2009, with a recipe: Making it wonderful: a tale of rhubarb bars.

Photo: We are Wisconsin, via the Wisconson AFL-CIO. Photo Credit: Karen Hickey.