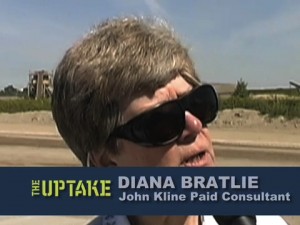 Minnesota’s Republican Party didn’t have to go far to find witnesses for its pre-recount petition that the Minnesota Supreme Court is considering. Many, and possibly all of the 11 election judges who submitted sworn statements saying that proper counting procedures may not have been followed on election night are known Republicans. That’s not surprising since generally there is a Republican election judge and a DFL election judge at each polling place.

But what is surprising is that one of the sworn statements comes from a consultant paid by Republican Congressman John Kline (Minnesota’s Second Congressional District), who has proven to be an unreliable witness in the past.

As The UpTake documented in 2008, Diana Bratlie has been paid thousands of dollars by Representative Kline for political research, and has a history of making inaccurate claims about facts, figures and DFL candidates’ stances on issues. In 2008, The UpTake witnessed Bratlie attempting to tell the media that the DFL candidate running against Kline had just said he didn’t want to drill for oil anywhere. She then repeated that claim in a letter to the editor published in the Eagan “This Week” newspaper. A replay of the news conference on which Bratlie based that statement clearly showed that not to be the case. Here’s the video of that story from 2008:

Transparency and accessibility are very desirable in our political system. Without accessibility you can’t ask the questions that need to be answered. And without transparency, it’s hard to trust what people tell you.

For example, I’m about to tell you a story about Republican Congressman John Kline. But if I didn’t tell you I was a supporter and occasional volunteer for his Democratic opponent Steve Sarvi, that would not be transparent.

Transparency was at the heart of Kline’s opening salvo against his Democratic opponent last election cycle.This flyer accused Coleen Rowley of “playing dirty tricks” when one of her volunteers tried to get on Kline’s mailing list and didn’t identify himself as a volunteer for Rowley.

This is the woman whose word the advertisement was based upon. Diana Bratlie was staffing the Kline campaign office when the volunteer, David Bailey, asked to be on the list. She wrote that Bailey used “false pretenses and deception to misrepresent himself.”

Fast forward to this election cycle…Kline’s new opponent, Democrat Steve Sarvi, holds a news conference about how high gas prices are forcing a local gravel pit operator to lay off people. Bratlie was there and didn’t reveal her history with the Kline campaign before she went in front of the TV cameras and started arguing with Sarvi about oil drilling in Alaska.

Sarvi: “I just don’t think we should be drilling up there.”

Bratlie: “So you don’t want any oil exploration whatsoever anywhere.”

Sarvi: I didn’t say that.

She was trying to get Sarvi to say he was against all oil drilling. And even claimed he had done so when our videotape showed that not to be the case.

Bratlie: “Gosh, I stood right there and I watched him say no. And I said ‘nowhere, you wouldn’t drill anywhere?’and he said ‘no’.”

McIntee: “No he said he wouldn’t drill in Alaksa.”

Bratlie: “So you don’t want any oil exploration whatsoever anywhere.”

Bratlie: “Yeah you did.”

So is this just a case of someone forgetting to reveal she’s working for the other candidate…or was it a planned ambush? I say working because Bratlie told Sarvi she was a Republican, but made no mention that she is a long time Kline volunteer ….a “volunteer” who has made a thousands of dollars as a paid Kline campaign consultant.

Bratlie and her husband own a company called “Family Celebrations” that operates out of their house in Lakeville. Since 2004 the Kline campaign has regularly bought research services from Bratlie’s company.

Kline’s payments to Bratlie’s company started in January 2004 with $5,385 for “analysis and conversion of database”… followed by another payment of $6,450 in August and $7,925 in November.

Bratlie was being paid by Kline when she was involved in other activities designed to disrupt Kline’s opponent’s campaign. She was with John Kline’s District Director Mike Osskopp when he attempted to disturb a campaign rally by yelling racial slurs at cars as they pulled into a parking lot.

Osskopp: “sure enough… another Jap car. All your buddies are supporting these Jap and German cars.”

Osskopp later apologized for his remarks.

Kline’s opponent Steve Sarvi has been giving people such as Bratlie plenty of opportunities to ask him questions…holding more than a dozen pre-announced question and answer events in the first week of the campaign alone. However, John Kline has been reluctant to do so in an uncontrolled situation.

This is Kline at his last open and face-to-face meeting with constituents. He did it only after hundreds of people signed a petition requesting it. You can see why he might be hesitant to do another. The topic was making college tuition more affordable.

Kline:“and so I’m looking for solutions. If you got one, I’d love to hear about it.”

Student: “OK, well maybe you can roll back the tax cuts on the on the very wealthiest Americans.”(Applause & cheering from crowd)

Kline’s office promised many more meetings like that one. Since it happened more than a year ago, Kline has not lived up to that promise. Instead holding “tele-town hall meetings” where residents are randomly chosen to listen to Kline answer questions on a phone call.Constituents are given no prior notice that Kline is calling, so there is little time to prepare any questions.

So why doesn’t John Kline hold more press conferences to answer questions like his opponent Steve Sarvi does? I asked Kline’s paid consultant Diana Bratlie that question.She said Since Kline has a record he doesn’t have to do that.For The UpTake, I’m Michael McIntee.

Bratlie letter in Eagan’s “This Week” newspaper insisting that Sarvi opposes all oil drilling in the United States. (The letter has apparently been removed from the newspaper’s site)  She wrote:

I then asked if, hypothetically, the oil companies gave up their current leases, would Sarvi be amiable to allowing them to drill in ANWR and/or off shore? A trade of sorts. He answered, “no.” I responded, “Would you ever consider drilling anywhere in the U.S. … ANWR or off shore.” Answer: “No.”

Bratlie: If the oil problem is going to be corrected by the Arabs drilling more oil, why wouldn’t it be corrected if the Americans drilled more oil?

McIntee: Wouldn’t it have something to do with most of the oil in the world is there as opposed to here?

Bratlie: But that’s not proven. Theirs is running low.

McIntee: The last geo-survey of oil which was printed in the Star Tribune has a nice big map you can see. And if you look at the relative sizes of the countries and the oil, Saudi Arabia pretty much dominates the entire picture while the US makes up like a very small portion of that. And that’s known reserves.