Public workers turned out in record numbers at Tuesday's rally.

“We will not let Minnesota become the next Wisconsin,” said state snowplow driver Mike Lindholt, addressing a large and energized rally of public employees at the state Capitol Tuesday. Proposed legislation that brings Wisconsin-style attacks on public workers to Minnesota helped fuel a record turnout for AFSCME Council 5’s rally at the Capitol rotunda. Some 1,500 people attended the rally, then fanned out to meet with lawmakers during the union’s annual Day on the Hill.

“We’re gathering here at the state Capitol to not just fight for public workers, but to fight for the middle class of Minnesota,” said Eliot Seide, AFSCME Council 5 director, addressing the rally.

AFSCME has advocated the state take a balanced approach to solving the state’s budget crisis – by raising revenues – and not take the cuts-only approach proposed by the new Republican majorities in the Legislature.

“Just like Wisconsin, public employees are not the cause of this crisis,” said rally speaker Christine Main, a member of AFSCME Local 517, who works as an employment counselor for Washington County. “This budget crisis is a tax crisis caused by tax cuts for the rich.”

Public workers in Minnesota already have made sacrifices, speakers at the rally said, accepting wage freezes, taking unpaid furlough days, and increasing their contributions to their pensions.

“What’s the fix?” Seide called out to the crowd in the rotunda. The crowd roared back, “Tax the rich!” 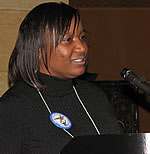 Photo: AFSCME Local 920 member Yvette Young, who is a clerical worker at the Minnesota Department of Health: “An average AFSCME pension is about $13,000 per year. With Social Security, this is the difference between dignity and poverty when we retire.”

“The cut in state aid to cities and counties is destroying the public services middle class families like you and me depend on,” said AFSCME Local 66 member David Leonzal, a City of Duluth utility worker, addressing the rally.

“For three years, we’ve been working under the same pay rate,” he added.

AFSCME Local 920 member Yvette Young, who is a clerical worker at the Minnesota Department of Health, spoke to the rally about several bills attacking the pensions of state employees.

“An average AFSCME pension is about $13,000 per year,” she told the rally. With Social Security, this is the difference between dignity and poverty when we retire.”

AFSCME Local 221 member Mike Lindholt, who drives a snowplow for the Minnesota Department of Transportation, took State Representative Keith Downey, R-Edina, to task for comments Downey made urging cuts to state government to “strangle the beast.”

“Here we are, Representative Downey,” Lindholt proclaimed at the rotunda rally. “Take a good look. We are not beasts.”

The crowd chanted, “We are not beasts!”

“The Republicans and Tea Partiers like to carry around a copy of the Constitution. Maybe they should read it some time,” Lindholt said. He cited First Amendment rights about the right to free speech, the right to free assembly, and the right to petition the government about grievances. “If that isn’t the right to form a union, I don’t know what is.”

“They are going after unions because they want to drive down the wages of everyone in the middle class,” Lindholt said.

To illustrate that point, AFSCME prepared giant checks in the amount of $3.2 billion for delivery to Governor Dayton and legislative leaders. That’s the additional amount in state income tax that people earning more than $130,000 a year would pay – if they paid the same effective tax rate as middle income families.

And that additional tax revenue would go a long way to solving the state’s $4.2 billion budget deficit.

Following the rally, AFSCME members broke into small groups to attend scheduled meetings with legislators. Members dressed in AFSCME green shirts seemed to be everywhere in the halls of the Capitol and State Office Building.

“This is the biggest Day on the Hill ever,” said Mike Buesing, president of AFSCME Council 5. At a gathering at the Crowne Plaza Hotel before the rally, Buesing asked members who were attending their first AFSCME Day on the Hill to raise their hands. About one-half of the crowd raised their hands. 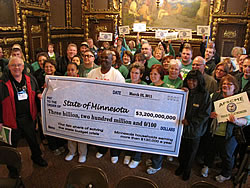 Photo: AFSCME members gathered in the Governor’s reception room with a giant check in the amount of $3.2 billion. That’s the additional amount in state income tax that people earning more than $130,000 a year would pay – if they paid the same effective tax rate as middle income families.

One first-timer was Diane Larson, St. Cloud, who is a member of AFSCME Local 753 and works as a library technician for St. Cloud State University. “It was a big call for our local to send as many people as we could,” she said. “I figured this was the most important year to go.”

“With all the anti-union bills that are there right now… I felt it was important for me and my family to come,” said Matt Stenger, St. Peter, a member of AFSCME Local 404 who works as a security counselor for the St. Peter Regional Treatment Facility.

AFSCME has identified a list of “50 toxic bills” currently proposed at the Legislature which attack public employee wages and benefits, public services, and collective bargaining rights of all workers.