Moe, 21, dropped out of college and moved into the Wisconsin state Capitol. He brought a few blankets to spread over the cold marble tiles. Above the corner he inhabited he taped a sign: “Home … sweet home.”

Thousands of people have slept in the Capitol in protest of the bill, an act that started Feb. 15. State officials ordered people to leave – or be removed – Sunday afternoon. But as the day edged on, police had not forcibly removed anyone, and the protesters remained.

The bill, which passed in the Assembly on Thursday night, is an attempt to repair a state budget shortfall that will hit $137 million by July. The provision ending collective bargaining could net $30 million before then.

But it stalled in the Senate after 14 senators fled to Illinois on Feb. 17. Without them, the Senate doesn’t meet quorum and cannot vote on the bill. It remains uncertain when they’ll return.

Republicans have pegged the legislation as a race against the clock and said it must pass by Tuesday to allow time for a debt refinancing move that would temporarily save the state $165 million. But Democrats disputed the Tuesday deadline. 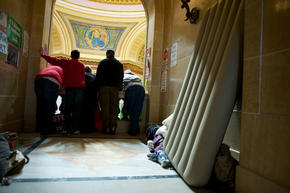 The bill sparked dissent in the streets of Madison, with more than 70,000 people from across the nation converging Saturday at the Capitol in the largest rally in Wisconsin since the Vietnam War.

Bullhorns punctuated testimonies and calls of “Kill the bill!” The message has spilled out of the Capitol, and posters with solidarity slogans show up in most store windows along State Street.

The protests center on collective bargaining, but many held signs for other provisions of the bill, including changes to Medicaid and BadgerCare, the state’s health care program. Walker’s bill could raise the income eligibility level for the programs.

Another provision would sell state-run power plants without competitive bidding. Some Democrats say this would play into the hands of the Koch brothers, conservative billionaires in the energy industry who donated to Walker’s campaign.

At a press conference Wednesday, Walker said there was no tie between the Kochs and that section of the bill. Republicans said the no-bid process would help fill the budget gap before the fiscal year ends June 30.

Democrats tried to add more than 100 amendments to the bill last week, including allowing bids on power plants. None passed.

When it came to the Assembly vote on the bill, the final decision was made in seconds.

Speaker Pro Tempore Bill Kramer, R-Waukesha, called for the vote shortly after 1 a.m. on Friday, counting yeas and nays so quickly that 28 representatives never got a chance to cast their vote. The bill passed 51-17.

The bill’s passage was not democratic, protesters and some representatives claimed, and a number of Assembly members didn’t get a chance to speak. Republicans countered that the 60 hours spent debating the budget was enough time for opinions to be heard. 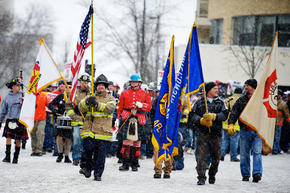 Moe listened to the Assembly from the rotunda Thursday night, where a live feed of the floor was playing. The room erupted when the bill passed – as did the floor, and haggard Republicans left the building to finger pointing and calls of “Shame!”

On a bed near Moe’s, Jenna Pope was updating her Facebook status to reflect the vote. The University of Wisconsin-Milwaukee sophomore became her friends’ source of information from the Capitol. She’s constantly updating, a job that she said can be wearing.

At some points, only the encouraging comments on her page kept her posting.

Pope and Moe didn’t know each other before last week; they met in the Capitol’s halls, ones that were barely visible by Sunday, as thousands of homemade posters and letters from around the country covered the marble.

Moe, a Bloomington, Minn., native, said after participating in a few protests early last week he became obsessed with the cause. He’d return home to sleep and study for his classes at Madison Area Technical College in the evening but couldn’t concentrate – his mind was three blocks away in the Capitol rotunda. So he dropped out and moved in.

Protesters began flooding the Capitol on Feb. 15 after 1,000 members of the Teaching Assistants’ Association gave Walker valentines with sayings like “I heart UW.”

The valentines were going to be just a fun event, TAA Co-President Alex Hanna said. Then Walker’s bill was released and they turned into a pointed protest, focused on provisions that would break the TA’s union, cut down the legislative appropriation to the university and separate the University of Wisconsin-Madison from the rest of the state’s school system.

That day, people testified until 3 a.m. in front of a small group of legislators and aides. At that point they figured, “Why not stay?” Hanna said.

Since then, an average of about 400 people have been sleeping at the Capitol each night, said Erika Wolf, an advocacy field organizer for United Council of UW Students.

The move into the Capitol wasn’t coordinated.

“It really blew up too fast for anyone to strategize how we do it,” Wolf said.

The “people’s house” was redecorated as protesters formed a community inside the walls. Their operation boasted childcare, a medic station, food line and even yoga courses, all sustained by donations.

With so many people confined in one place, rumors fly – as do germs. For the germs, boxfuls of hand sanitizer were dispersed to reduce the threat of illness. As for the rumors, organizers like Wolf tried to quash them, including constant fears of being kicked out by police.

Throughout the weekend, officials have shut off rooms and prohibited people from bringing in sleeping bags in an attempt to slowly empty the Capitol for cleaning.

Police stood in a line in front of the Capitol on Sunday, letting in only one person for every two who left.

Angry protesters demanded to enter the building, and marshals organizing the crowds asked everyone to remain calm and repeated that police were just doing their job. They encouraged citizens to call police chiefs and express their disdain for closing the building. By afternoon, they had done away with the two-to-one entrance ratio.

Organizers, like Wolf, have worked closely with police and met every morning with Capitol Police Chief Charles Tubbs to discuss what’s coming up that day.

“This isn’t about cops pushing us out,” Wolf emphasized. “This is about elected officials who refuse to respond to their constituency.”

Many police officers have been working 14-hour days and then sleeping at the Capitol, Madison police officer Brian Austin said. He and officer Dave McClurg were off-duty and protesting Sunday. They said they would have to be escorted out by their fellow officers. 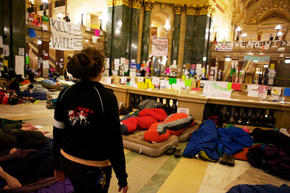 Legal advocates were on hand to observe and talked with people inside the Capitol about what to do if they were thrown out. Protesters wrote lawyers’ numbers on their arms. Shortly before 4 p.m., Mio Suzuki read off a number to Paul Wihite, who was determined to stay. Suzuki said she was leaving.

Protesters were herded to the second level, but the restriction was lifted, and Tubbs announced that the hundreds who remained could stay the night. He did not say how long the campout will be allowed to continue.

The work of protesters is not over, Alexandra Port said. The University of Wisconsin-Madison freshman said the health benefits her mom receives as a teacher are critical to her family. She and her sister Alison have been at the Capitol since the beginning. They come down every day after class.

Even if the bill passes, they will continue to oppose it and work to make sure Walker is not re-elected, Alexandra said.