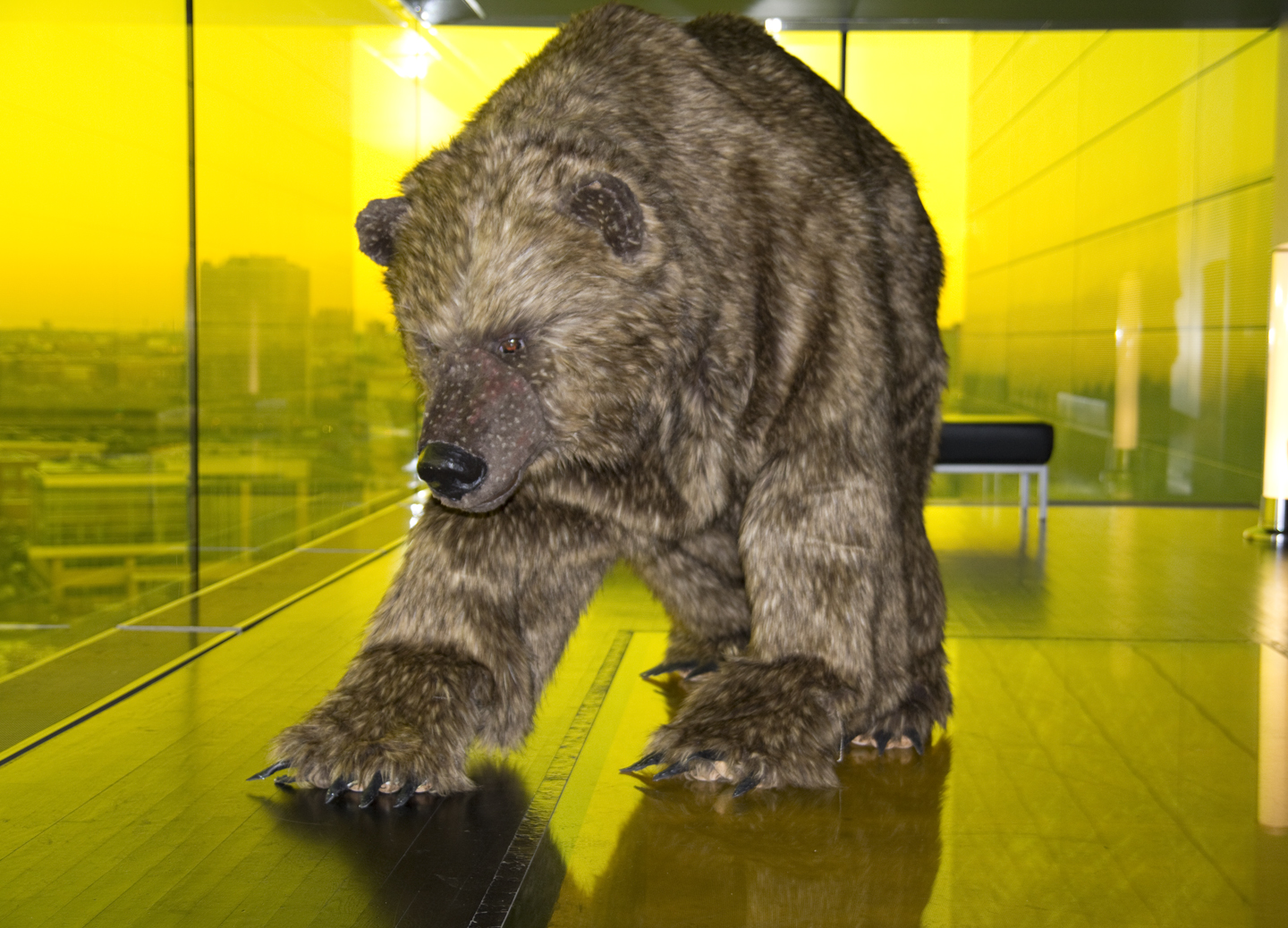 I sat on a stool next to Growly McFurryPaws at the bar nearest his home. He frequents the bar, he said, because his depression has become too much to handle. “I just can’t win, you know? I mean, don’t get me wrong, I know most bears have it rough. We look super scary, and can’t really help our baser instincts. Is it our fault that people are stupid enough to throw rocks at us in national parks, and then act all surprised when we chew on them a bit?” He took a sip from his double whiskey. “But I think it’s particularly difficult being the only bear in the complete works of Shakespeare. There’s a special sort of stress that accompanies that kind of fame.” He laughed, a hollow emotionless laugh, and corrected himself. “I mean to say, infamy.”

Growly McFurryPaws is the only bear to make an appearance in a Shakespeare play, in Act III scene iii of The Winter’s Tale. The role was a once-in-a-lifetime opportunity, and one McFurryPaws wasn’t about to pass up. “I’ve got kids to feed! What kind of dad would I be if I turned down a paying gig?” However, McFurryPaws admitted that he was skeptical. “I didn’t have a ton of information about what I’d be doing, and nobody seemed to want to answer basic questions for me—like, what is my character motivation? What will I be doing? Who will be on stage with me? It wasn’t until I stopped at Barnes & Noble to pick up a copy of the play myself that I realized what I’d gotten myself into.”

The Winter’s Tale, published in 1623 in Shakespeare’s First Folio, marks entry into what Shakespeare scholars call his Totally Fucking Bizarre period. It is a period in Shakespeare’s career exemplified by inexplicable characters, strange plot twists, comical beheadings, and a general disregard for the dramatic standards he himself had helped formulate in earlier years. Shakespeare declined to be interviewed for this story, remarking only, “Bears are funny, lulz look at that bear,” “I wanted to name Pericles ‘Peniscles,’ but King James wouldn’t have it,” and “I wrote The Tempest after rolling a turkey leg in opium and eating it.” 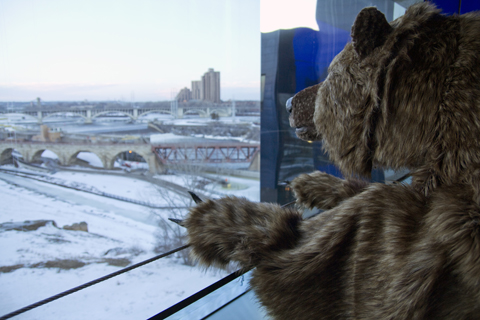 What started as a financially beneficial opportunity for McFurryPaws quickly turned into a stigmatizing career move that would alienate him from theatergoers and the bear community alike. “By the time I realized my only role in the play was to eat a dude, it was too late. The people that see the play generally dismiss me as an absurd and convenient plot interruption, a deus ex machina, an inconsequential moment in an otherwise engaging play. Fellow bears are calling me a traitor, ‘Beardolf Hitler,’ the bear that’s giving all other bears a bad name.” McFurryPaws noted that bears have been working for years to debunk the misconception that all bears do is eat people, and that his consumption of Antigonus has set the bear community back by decades. 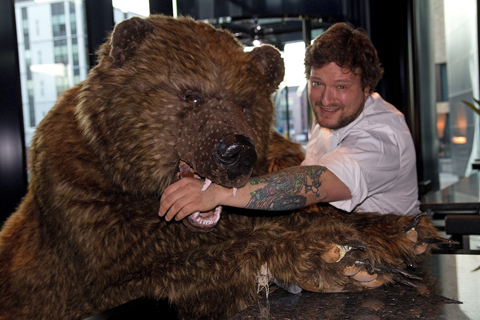 “So I ate a guy, so what? Let he who has not eaten a guy cast the first stone.” McFurryPaws was beginning to slur, and I asked if perhaps he’d had enough to drink. “I’LL TELL YOU WHEN I’VE HAD ENOUGH TO DRINK, LADY,” he said angrily, swatting my hand away from the bar. Since the change in McFurryPaws’s reputation, work has been scarce. “I can only get hired to work shitty part-time jobs right now. I got a gig in a cafeteria, but that didn’t last long. They said I was scaring the customers and getting fur in the macaroni.” 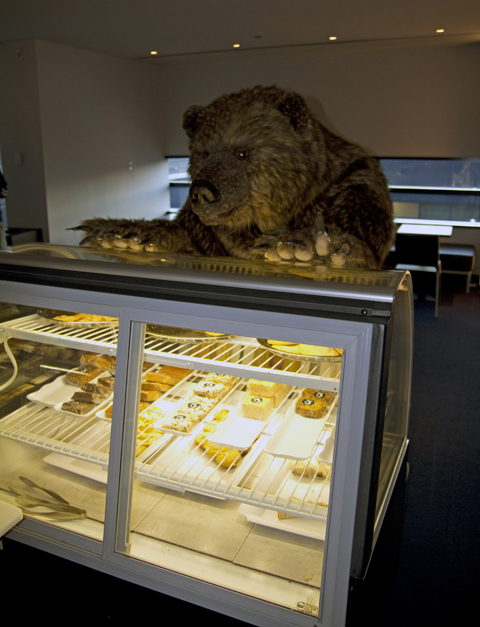 I asked McFurryPaws what he thought he was going to do now. “Fuck if I know,” he said, hanging his head. “I mean, how can I know? How can I possibly guess at this point? I’ll never work in theater again, I can tell you that much. And it’s a tough economy for a bear these days. I had one stage direction. ONE. ‘Exit, pursued by a bear.’ That’s it. Pretty innocuous, right?” He chortled into his glass, sending splashes of whiskey onto the bar. I wiped them away with a napkin. “Wrong. That stage direction ruined me. You see me traipse across a stage once and you think you know me? You don’t know me. My name isn’t Growly McFurryPaws; it’s Gary Feldstein. But they said ‘Gary’ wasn’t bear enough. My name is Gary. I have two kids. My wife left me. I filed for bankruptcy. Pretty fucking glamorous, huh?” 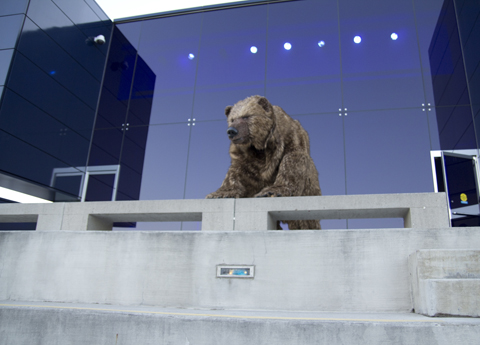 McFurryPaws cut the interview short, saying he was late for an AA meeting. “Do you think I could get a lift? It’s just across town,” he said as I paid the tab. “I didn’t think Antigonus was all that interesting, anyway,” he said, turning away. “If I didn’t eat him, somebody else was gonna.” McFurryPaws stumbled sadly out the door, forgetting he’d asked for a ride.