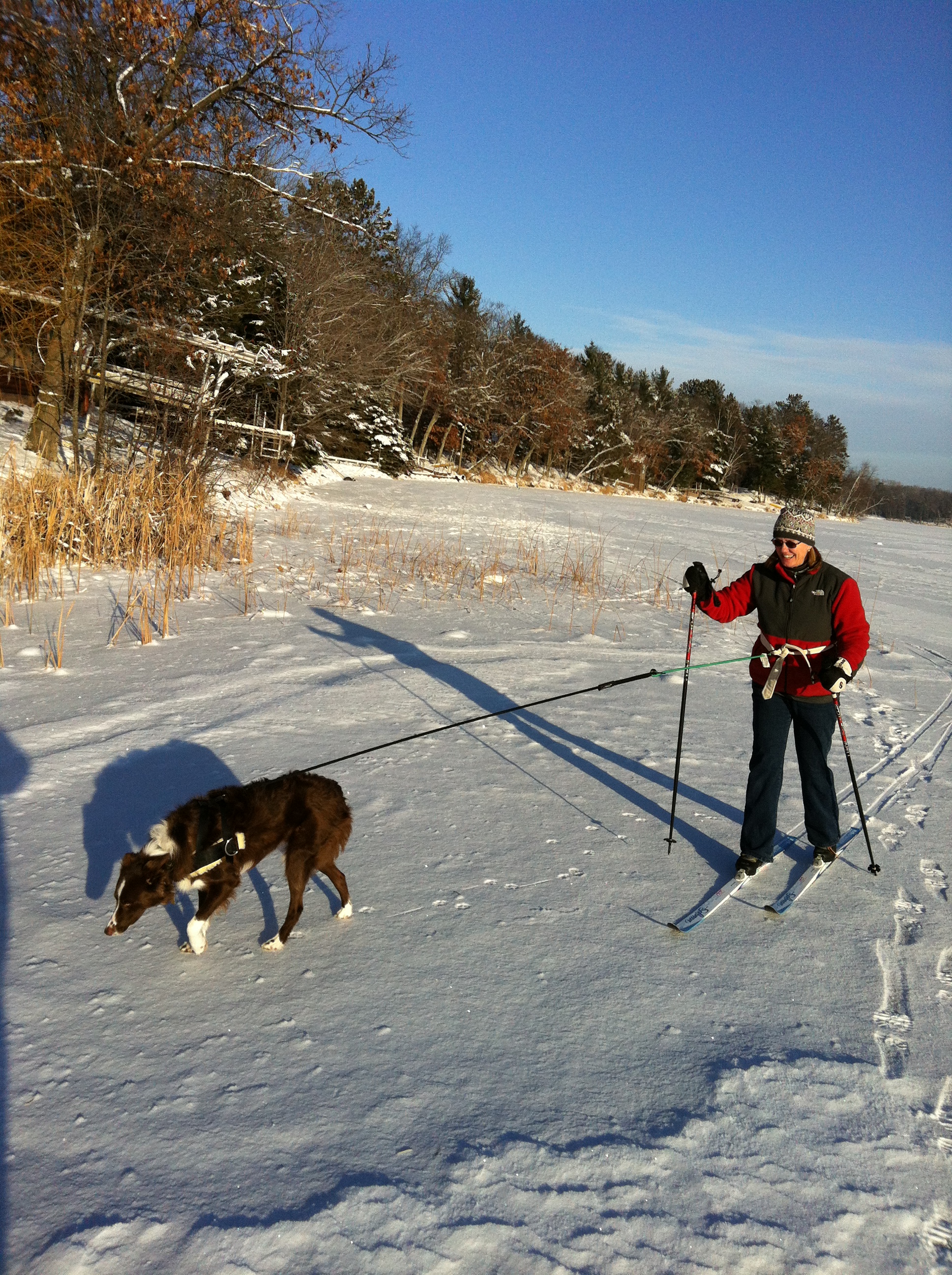 The last few weeks have been filled with wonderful winter fun due to the early snow we received. After last year with virtually no snow, it was nice to get back out on the winter trails and lakes. Over the last few weeks, we not only hit some traditional cross-country ski trails but were also able to try two new but growing winter sports: fat biking and skijoring.

Think of skijoring as dog sledding with cross-country skis. The dog wears a harness which is connected to the skier by a long leash. The combination of the dog pulling and the skier skiing produces a very fast ride that provides exercise for both. We took our one-year-old border collie Tia out for the first time on an area lake to give it a try. Our strategy was for my wife Cynthia to hocked-up to Tia while I took a position out-front and started calling her. Tia immediately got the hang of it and started coming my way while pulling Cynthia. After an hour of skijoring, we were all exhausted and ready for some hot chocolate. Here is a video of Tia in action:

If you’re interested in skijoring with your dog, I’d recommend your pick-up a harness for your dog at REI or a number of pet stores. We made our own 8’ leash using a rope attached to a bungee cord which provides some give during the run. Most cross-country ski trails don’t allow skijoring so your best bet is to try it on a lake or open field. Skijoring trails are groomed on some of the Wirth Park winter trails and at Elm Creek. There are also skijoring races you don’t want to miss in February during the City of Lakes Loppet Ski Festival.

Another new sport we tried is winter fat biking. Fat biking is simply a form of mountain biking using balloon tires that are 4” wide or larger. My brother Steve Weber is the park manager for the Cuyuna State Recreational Area in Crosby which has one of the largest mountain bike parks in Minnesota. He has miles of specially groomed fat bike trails that offered us a chance to tryout these funny looking bikes. Here is a video from the park that shows the fat bikes in action on the trails we were on:

Cynthia and I had a blast riding for a couple of hours in the park. There were also a half-dozen other riders enjoying the crisp but beautiful day. These bikes’ huge tires glide over the snowy trails and were like sitting on a balloon bouncing comfortably over every bump. Here is a wonderful article from the Pioneer Press about the park and winter biking I’d recommend: http://www.twincities.com/sports/ci_20096961

If you are interested in fat biking in the Twin Cities, Erik’s Bikes in Dinkytown rents them for $25/day. While there you can pick-up a Bike Everywhere map that shows what specially groomed fat bike trails you can use. Most cross-country trails will not allow fat tire biking. Erik’s staff said a very popular winter ride is the Minnesota River Bottoms Trials. You can find information about these trails at: http://www.morcmtb.org/. Fat biking events are also becoming very popular around the Twin Cities. Here is a site that lists all the events: http://mnbiketrailnavigator.blogspot.com/2012/12/winter-12-13-minnesota-fatbike-events.html. 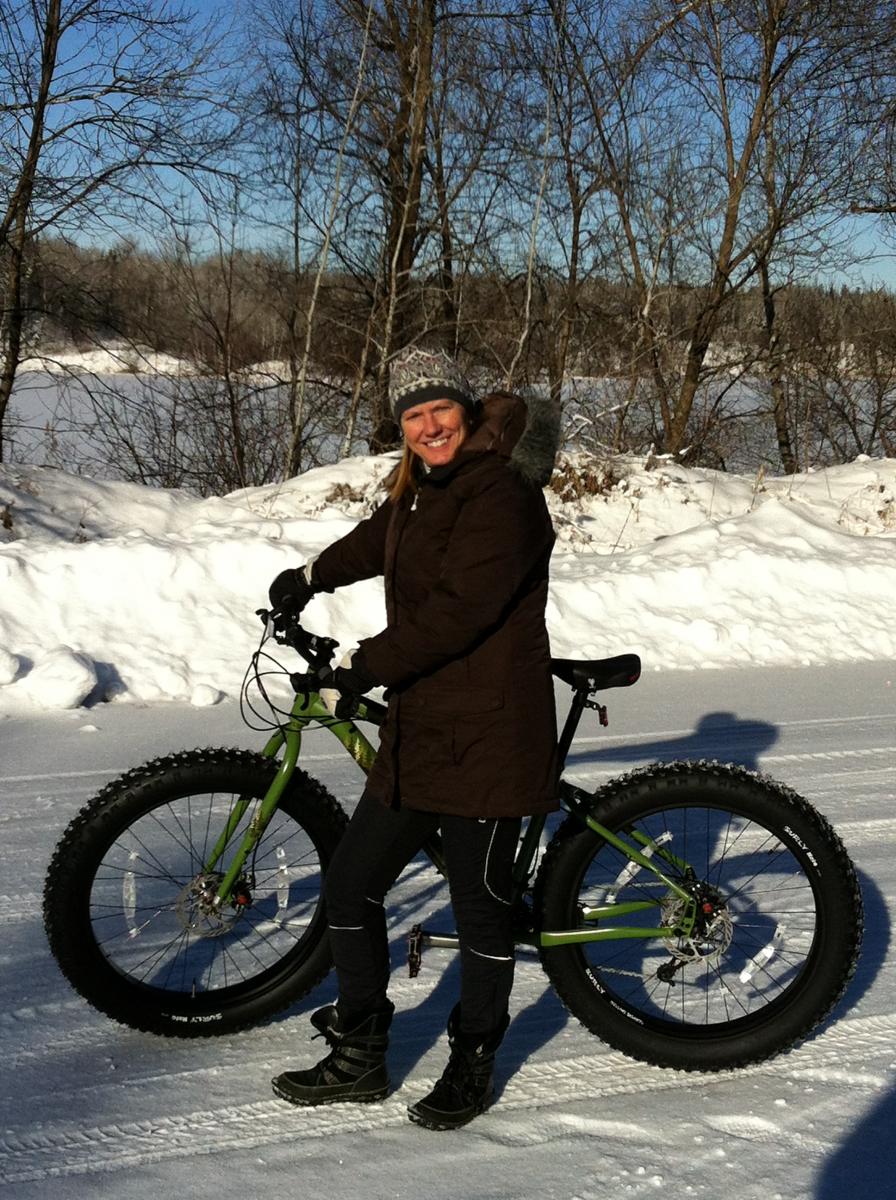 This year’s snow has also provided some wonderful cross-country skiing conditions. Cynthia and I were joined by our good friend Tamela Drake at Fort Snelling State Park which offered miles of perfectly groomed trails along the Minnesota River. There were a dozen or so other skiers enjoying these relatively flat trails that are perfect for all levels of skiers. 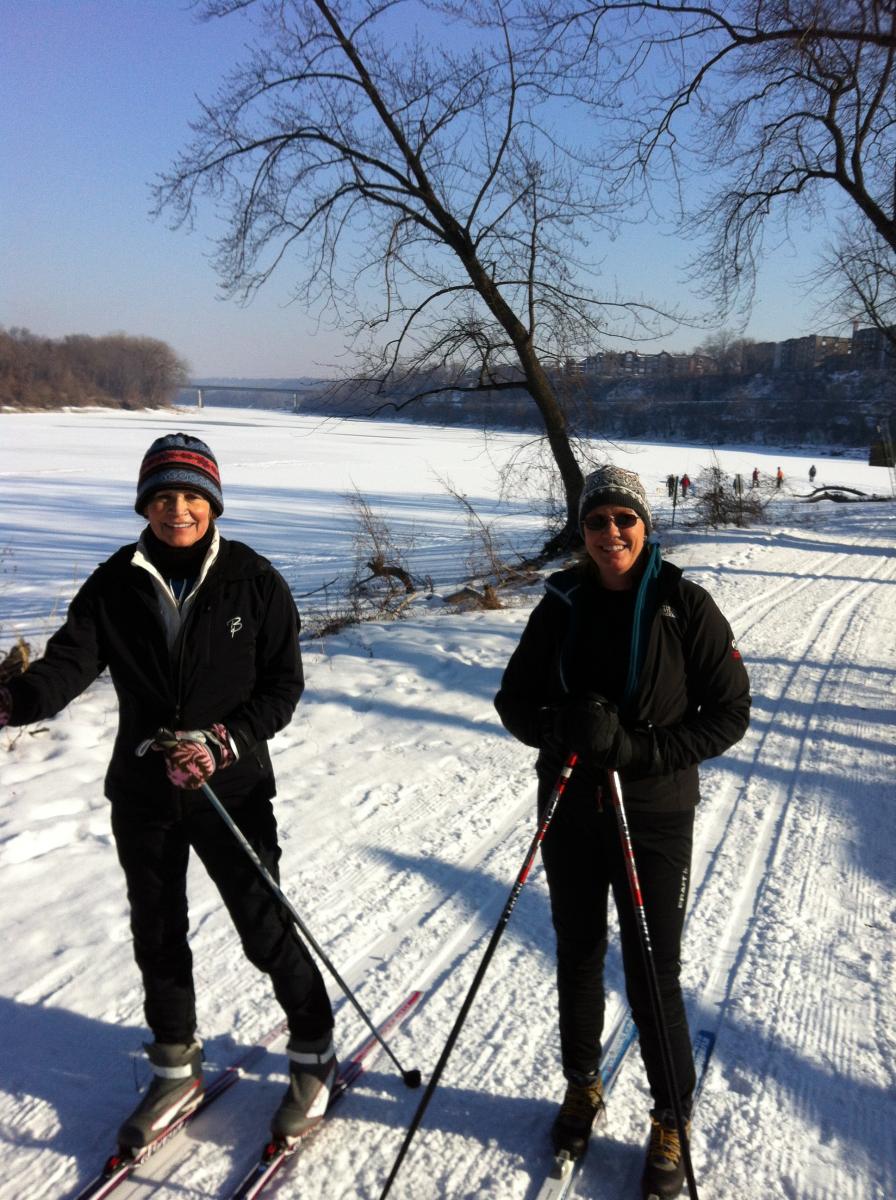 There are a number of groomed cross-country ski trails located throughout the Twin Cities. The most popular trials include many of the parks in the Minneapolis and St. Paul park systems along with the parks in the Three Rivers Parks District. Many of these parks also rent skiing and snowshoeing equipment. If you do go, remember that many of the parks require a ski pass: Minneapolis Ski Pass, MN Ski Pass or Three Rivers Ski Pass.

One of the funniest cross-country ski events each winter is the City of Lakes Loppet Ski Festival. You can enjoy taking part in this Uptown festival by skiing the trails that cover Lake of the Isles. You don’t want to miss this February event: http://www.loppet.org/cityoflakesloppet/.

Enjoy the rest of your winter!