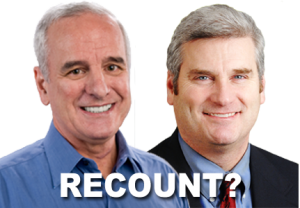 Photo from The Uptake

6:30 a.m. The morning after With Mark Dayton holding a ten-thousand-vote lead int he gubernatorial race, Minnesota woke up to the prospect of a mandatory statewide recount. Republicans took both houses of the Minnesota legislature.

Nationally—the Democrats lost the House of Representatives (and veteran MN Congressmember Jim Oberstar), though they are holding on to a majority in the U.S. Senate.

This article will be revised and updated as more figures come in.

As Mark Dayton holds on to a slim ten-thousand-vote lead (at 6:20 a.m.) in the gubernatorial race, and incumbents Secretary of State Mark Ritchie, Attorney General Lori Swanson, and State Auditor Rebecca Otto all easily winning re-election. But the big DFL loss came up north, as Republican Chip Cravaack unseated 18-term Congressional veteran Jim Oberstar. At 5:40 a.m., his margin was a narrow but seemingly decisive 5,000 votes. (With four counties in CD 8 still reporting incomplete results, an estimated 13,000 votes remained to be counted. For official figures on this and other Minnesota races, see the Secretary of State’s website.)

At 5 a.m., the Pioneer Press reported that Republicans now hold a 36-31 majority in the Minnesota Senate and a 73-61 margin in the house. The DFL’s stunning defeat came as they tumbled from an 87/47 majority position in the House, and a 46/21 majority in the Senate.

Here in Ramsey County, there’s a new sheriff in town. Bob Fletcher had more campaign signs in more places, but Matt Bostrom beat him in votes, by a comfortable margin. In other Ramsey County results, John Choi won the county attorney’s race.

In Minneapolis, the school board race remained uncertain, with clear (and expected) victories for Jenny Arneson, Alberto Monserrate and Hussein Samatar in the district races. Richard Mammen was a winner in the at-large race, but in the race for the second at-large seat, Rebecca Gagnon eked out a win over Chanda Baker Smith by about a thousand votes.

With Cravaack’s win in CD 8, Minnesota’s Congressional delegation is now evenly divided between Republicans and Democrats.

6-Michele Bachmann (R) won the most expensive Congressional race in the country.

8-Chip Cravaack’s narrow win was decided about 4 a.m. Jim Oberstar (D) has served in the House since 1975. According to Wikipedia, “His lowest winning percentage was 59 percent in 1992, but since then has not earned less than 60 percent of the vote.” Until now.

Around the country, a few races of note: