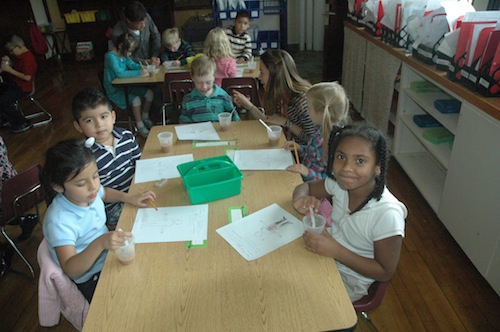 UPDATED 10/8/2012 – How can lower test scores lead to decreasing the achievement gap? In Windom Dual Immersion school,  students in kindergarten through 5th grade learn in both Spanish and English. That means a slower, but steady increase in test scores. While Windom’s third-grade test scores are lower than the district average, fifth-grade scores have gone up as the dual immersion program has been fully implemented over the past few years.

Part of the reason for lower third grade test scores is the nature of the dual immersion program. Principal Lucilla Yira explained that in the lower grades, the classrooms are mostly learning in Spanish. They operate on a 90/10 model. During their first year, the teachers speak in Spanish 90 percent of the time, followed by 80 percent the next year, and so on. Students are learning a lot, but they are learning mostly in Spanish. Because the MCA tests are English-only, Windom third-graders get relatively low scores.

Jim Clark, the school’s assistant principal, said it’s been a challenge that the third graders take their MCAs in English, when the majority of their learning has been in Spanish. On the other hand, he said, “One of the foundations of dual immersion is that we believe the skill transfers over.” That transfer of skills shows up by fifth grade, where scores have increased over the past few years.

A School in Transition

Lucilla Yira, the school’s principal, is in her fourth year. She came on board right as the school was forced to restructure, due to not making Adequate Yearly Progress (AYP) in reading and math in 2008. At that point, the school also transitioned from a K-8 school to a K-5 school. Before that, the grades were divided so that grades K-4 were Dual Immersion, and 4-8 was an open school.  “The two programs clashed,” Yira said. “There was no cohesiveness [in] the vision of the school.”

So when Yira came on board, she made some changes, including hiring new staff members, and changing the school to an all-immersion school.

In a 2009 quality report, Yira was said to have “made a strong impact on the climate and culture of the school, as well as on the quality of learning in many classrooms since her arrival two years ago.” The report said she is “solution focused, and at the same time, she is nurturing and budiling the capacity of the school to sustain and continue improvements.” 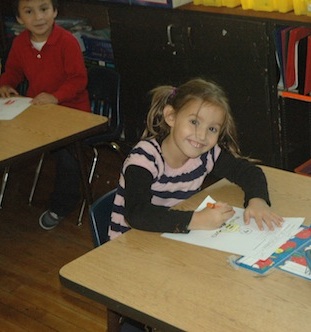 Windom currently is 52 percent free and reduced lunch, down from 78 percent from when Yira first started. “The demographics are changing,” she said. “There’s been a shift in interest in dual immersion.” Because it’s a magnet program, it attracts students beyond the neighborhood, and some who come from affluent families, according to Yira.

Yira said 50 percent of students speak Spanish at home, and 50 percent of students speak English at home. However, several first grade teachers said that in the lower grades, the student population is tipped more toward English speakers. Yajaira Guzmán, a first grade teacher, said the reason there are more English-speaking students in the lower grades is because of the high demand for the school. Lucila Anderson, another first grade teacher, says that MPS’s Welcome Center should be responsible for maintaining better balance. More English-speaking students, she said, affect the classroom, by creating more of a tendency by the students to speak in English, especially at the beginning of the year.

When Yira came to the school, Windom’s English Language Learners (ELL) program was almost nonexistent, she said. “There was a lack of understanding of what the needs were,” she said. Now they have ELL services, with social studies and science are taught in the language that the children speak. 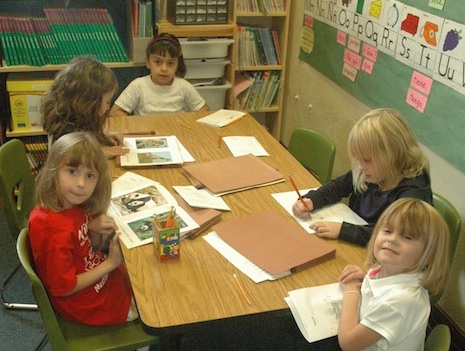 Yira has implemented a Windom Enrichment Center, where parents can take classes and get more information. The school has also partnered with the MN Twins. The team has donated backpacks, and supplies, as well as 400 Twins tickets.  They also have nine other community partnerships.

This spring, Windom fourth and fifth grade students will take a seven-day trip to Puerto Rico, to give them a global experience.  The students fundraise by selling frozen pizzas, empanadas, and doing car washes, etc. to raise the $1,000 each student needs for the trip, according to Assistant Principal Jim Clark.  This will be the second time the school has taken the trip, the first time being two years ago.  While on the trip, the students spend half the day in summer school with native Spanish speakers from Puerto Rico, and the rest of the time traveling.  The school has raised some money for scholarships.  According to Clark, about half the fourth and fifth grade students in the school went on the trip last time (30 out of 60) but he expects that number to increase this year due to fundraising efforts.

In the Twin Cities, as in many regions across the country, segregation in schools is rising. Increased segregation is due to many factors — everything from housing trends to the rise in charter schools and decreases in school busing. Some experts say the increase in high minority schools is part of the reason for the achievement gap, though integration doesn’t get as much attention as teacher performance. 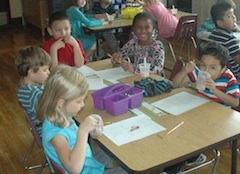 Windom Dual Immersion takes a direct approach to creating an integrated school.  Windom’s philosophy is that the students themselves are “experts in the classroom” for one another, according to Principal Lucila Yira. That translates to a demographic breakdown of about  two-thirds Hispanic and one-third non-HIspanic white students, with a small number of African American students, according to MPS data.

What the Parents Say

Windom encourages a celebration of diversity, inviting all students, no matter their personal background, to experience and learn about culture from Spanish speaking cultures. The teachers also are committed to encouraging students from different backgrounds to make connections with each other. That’s something the parents really appreciate. 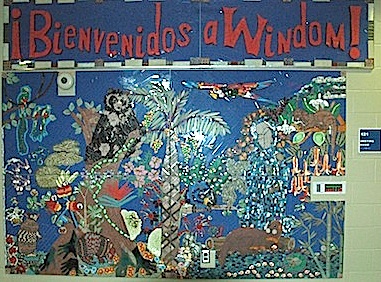 Jennifer Welbaum is a parent with three children in the school, in kindergarten, second, and fourth grades. She is a Spanish teacher herself, having taught at Washburn High School for ten years, and has been impressed with the language learning that her children have experienced. “Their ability even after kindergarten is amazing,” she says. “The depth of knowledge they have really impresses me.”

Elizabeth Miller, a French teacher at Anthony Middle School, has two children at Windom, in second and fourth grades. When her oldest daughter was in first grade, the family took a trip to Puerto Rico, and Miller had to go to the emergency room.  Even though her daughter was in first grade, she was able to speak to the hospital on the phone when Miller’s husband wasn’t able to communicate with them.

Valerie Saldaña, who works at the school and also has a child in kindergarten there, is a Spanish speaker but doesn’t speak Spanish at home, as her husband doesn’t speak the language. She’s thrilled that her child can now have a conversation with her great grandmother, and is even helping the other family members to begin to learn Spanish as well.

Cindy Pick teaches reading at the school, and also has a first and a fifth grader who attend Windom. “I love this school as a teacher and a parent,” she said. “They make Spanish really cool here.”

What the Teachers Say

Victoria Murray is teaching in the school for her third year, after spending 20 years teaching in Argentina and then at St. Catherine’s Early Childhood program.  She said the school really focuses on culture from Spanish-speaking countries.  “The non-Latino families embrace the culture so much,” she said. She’s pleased that instead of being ashamed of their heritage, the school encourages Spanish-speaking students to value their roots.

Yajaira Guzmán, who teaches first grade at the school, previously worked at Green Central Elementary for 14 years. She said that she agrees with the dual immersion model, and feels it allows students to learn from each other, and to embrace their cultural differences.

Lucia Anderson, who also teaches first grade, said the atmosphere of the school is open and calm, with values that say it’s okay to agree to disagree.  “It’s a small town feeling,” she said of the atmosphere.

Guzman agreed that while Windom, like all MPS schools, has focused instruction, the policy of the school is more relaxed, with meetings that allow teachers to feel a part of the conversation.

Since this article was written, the 2012 test numbers have been posted. They show continuing improvement. Here are the tables showing the 2008-2012 test scores for Windom School fifth-graders, according to the Minnesota Department of Education website. 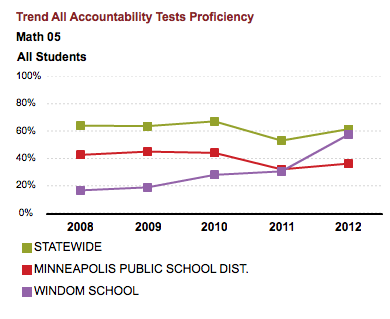 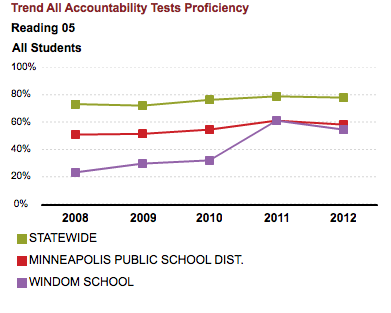