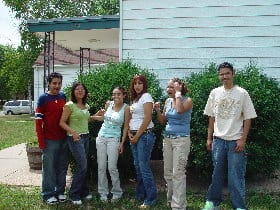 These Willmar teens were part of a project that created TV and radio spots designed to air community issues.

Six years ago Willmar was a quiet city growing old in greater Minnesota. The economy was stagnated and opportunities were rare. But five years ago, a new engine began moving the city. The economy began to grow and the streets, once quiet, turned busy, full of life and movement. The energy that new immigrants brought to the city became an unexpected asset. Now you need to use a different lens to see Willmar because it has turned into a very dynamic and powerful city, breathing commerce, breathing strength and breathing youth.

Some things still need to change though. And like any other fast-growing city, Willmar needs to reach out to the young who will take control of the city in the coming years. This is the story of 10 Latino kids struggling to make their voices heard.

I met them through a very close friend of mine. Now that I think about it, it seems more like a perfectly orchestrated plan to get my attention, but I don’t regret it for a second. My friend, Silvia Ontaneda (working for the Main Street Project) made all the arrangements to make sure that I get to meet them during a business visit to the city (Silvia was at the time working on several community projects in Willmar). And that was how, a few weeks ago, I got to meet a key figure in the Latino community in Willmar, Maria Diaz. Maria turned out to be a wonderful woman, one of those people who never give up when it comes to our community issues. And it was Maria who introduced me to these wonderful kids.

Silvia, whose work in the Main Street Project consists of community development, proposed the idea to Maria. She asked her to gather a small group of kids and involve them in the production of TV and radio spots about the community issues that affect them the most. Maria, as usual, began working without hesitation and gathered a good dozen of kids for the project (at the end only 10 of them were able to join the project).

Silvia’s project goal was to introduce kids to TV and radio production and involve them in community issues and problem solving. She rented the equipment and the editing studio and she launched the project with Maria’s kids.

The project
I had the chance to meet them and I really enjoyed a nice lunch with six out of the ten kids (Santiago Coronel, Moisés Ibarra, Diana Torres, Nancy Millán, Jessika Núñez, and Stephanie Orozco). They are such a great team, a very dynamic group that at the beginning I found a little shy (I guess they are not used to grown-up guys asking questions). We had a great conversation and talked about different topics, and when I asked them the reasons they decided to join the project, they candidly answered “What else is there for us to do during summer time? It seemed like a good idea so we all said ‘yes’ to the project.”

Maria confessed that at the beginning she was a little concerned “…it was their first day of vacation, they’d rather stay in bed than work in this project, I thought, but that wasn’t the case. I found a group of kids boiling with enthusiasm and ready to work.”

Maria was the coordinator of the project, the liaison between the kids and Silvia, and she worked with them every step of the project. The first day they gathered and had a brainstorm about the topics they wanted to talk about. At the end they chose four topics that they produced in a very professional way:

1. Be yourself: According to the kids involved in the project, they wanted to portray a sketch that would teach kids the importance of being yourself every step of your life. “We wanted to portray a way to find your inner self, your very own values. Something that would teach everybody the importance of being yourself, not pretending to be someone else,” they confessed. “We talked about it and rehearsed many times. We couldn’t find a way to make it shorter and at the end it was a one-minute spot. We added some sound effects and added a cell phone sound and it turned out to be great,” they said with big smiles in their faces.

2. Domestic violence: In this spot, the kids wanted to show a different face of domestic violence—the face of parents who beat their children. I was surprised to find such mature kids, willing to talk about a topic that is usually seen as a situation between husband and wife. They do understand perfectly that parents have the right to correct their children’s behavior but they made it clear that there is a fine line that divides corrective measures from violence.

“It doesn’t matter where you come from. It doesn’t matter if it’s a cultural thing or not. If your parent beats you that’s violence and that’s it. They must understand that in this country it is illegal to beat a child.”

I was impressed by this rationale but somehow I felt like there was something else behind it, so I continued asking questions and in a matter of seconds I found something else. The explanation was crude and simple but paints a different picture of the issue, the reasons why some Latino kids take the beatings without a question. “If you call the police, your parents can get deported and you don’t want to see that happening. It is better to take the physical pain than the emotional pain of seeing your parents detained and deported as criminals.”

3. Dream Act: This spot is designed to help the community understand what the Dream Act is about and how the systems bars undocumented kids from entering the higher education system (universities and colleges are forced by law to charge out-of-state tuition to undocumented kids. They are not allowed to obtain scholarships or credits for education, so tuition has to be paid out of pocket and sometimes it could be up to double or triple the amount a citizen-resident of the state pays). “Why does it matter if you are undocumented or not? Everybody should have the opportunity to enter the universities,” they stressed. “The actual system shatters the dreams and the self steam of kids.”

4. Every face has a name in your community: This is a very special call to community involvement, a call to meet our neighbors and try not to judge the book from its cover. “It is about learning to share, about learning about each other and understanding,” and, of course, knowing our neighbor’s name is the easiest way to learn about each other and the stories behind them. Just a friendly reminder that every face has a name in our community.

These kids did a wonderful job. But, unfortunately, their work is laying on a desk without being aired. Their struggle and their message remains unaired and none of the TV and radio stations in Willmar have showed any interest in them. Maybe they need more adults involved in the issues. Maybe they need more community involvement to make the TV and radio stations consider airing the spots. Maybe they need more support from all of us to help them understand that we care about their work and that we know that they are more than a bunch of kids looking for something to do during their summer vacation. These are real kids. Kids who understand the problems they face. Kids with a voice and a need to air it. Kids who deserve an applause and a big “A” for their work.