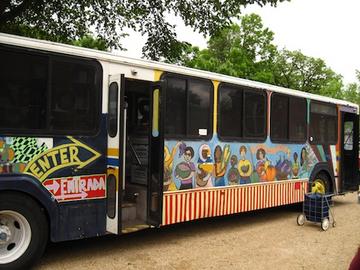 This whole Sisters’ Camelot disaster sure has been confusing. Since the beginning of March, the canvass workers, who are independent contractors raising donations for the non-profit, volunteer-run collective organization have been on strike. The canvasseres recently joined the IWW (Industrial Workers of the World, also known as the Wobblies.) In the week following the strike, Sisters’ Camelot agreed to four of the strikers’ demands, but also fired one of the striking organizers, Shuge Mississippi. (To get an idea of the emotional discussion that’s been happening, check out Sisters’ Camelot Facebook page and the union workers’ Facebook page.)

On the one hand, you have Sisters’ Camelot, one of the most hippy organizations I can think of in the Twin Cities. I mean, when they’re not traveling in their art bus to poor neighborhoods in the Twin Cities giving out food, they’re showing solidarity with various protests with bowls of soup, or stopping by MayDay Parade or Barebones. They’re all about sustainability, equity and justice. What’s more hippy than that?

On the other hand, you’ve got the striking canvassers, who accuse Sisters’ Camelot of taking on the big boss role, saying that they’re employing union-busting tactics like firing one of the striking organizers (more about that later.)

Then there’s a third group of anarchist/anti-authoritarian folks (including members of the RNC 8, jury resisters, etc.,) who weighed in with a community statement that agreed with some of the critiques leveled by the strikers but called for the two sides to work together within the current structure. They also stated that the collective members were right to fire Shuge Mississippi.

Meanwhile there have been other statements of support for the strikers, and the whole thing goes on with no apparent end in sight.

When I first wrote about this story, I was definitely planning on following up with it, but the wind got knocked out of my sails a little bit when I realized how much this seemed to be a personality conflict focused on one person. When I initially interviewed Shuge Mississippi, he strongly denied that the conflict all was about him, but that definitely seems to be the clear message from Sisters’ Camelot. He was once a member of the collective but that relationship ended unhappily a couple of years ago and the collective terminated his canvassing contract a couple of weeks ago. Statements from them and their supporters also claim he’s the focus of the conflict. So far, Sisters’ Camelot hasn’t come forward with evidence or any statement about what actually happened in the past, and so I can’t really write about rumors and personality conflicts without more to go on.

I was just going to let the story go, but then I got an email from Jaime Hokanson (one of the co-authors of the initial community statement), who suggested looking at this story from a historical perspective of “past progressive/radical institutions that have faced similar issues of strife.” Hokanson gave examples of the co-op wars of the 1970s (which I mentioned a couple of weeks ago in a column about socially engaged art), where, as Hokanson put it “there was a clear case of people on the left spending a heck of a lot of energy attacking each other, involving quite a bit of secrecy and intimidation tactics), struggles with the Cedar Riverside People’s Center — apparently around union organizing — and FreeWheel Bike Co-op, which had a conflict in the 1980s around lesbian feminism resulting in pickets outside the store.

I wrote back that my mind totally went to the co-op wars when I first heard about the Sisters’ Camelot mess. While that wasn’t really a labor conflict, it was an example of people who seemingly should be on the same side fighting with each other to the point of warehouse takeovers. I think this current crisis asks of progressives and radicals some tough questions about how progressive organizations deal with contract labor in a fair and equitable way. At the same time, how can groups face these issues without tearing each other apart in the process?

I think it might be helpful to have some old timer radicals weigh in — on the above examples, if they were around, or from similar experiences where groups that really should be on the same side just can’t seem to work out their differences.  So if that’s you, it would be great if you become part of the discussion, either in the comment section below or by shooting me an email. Sisters’ Camelot is too important an asset to the community to let it fall apart because of this crisis.