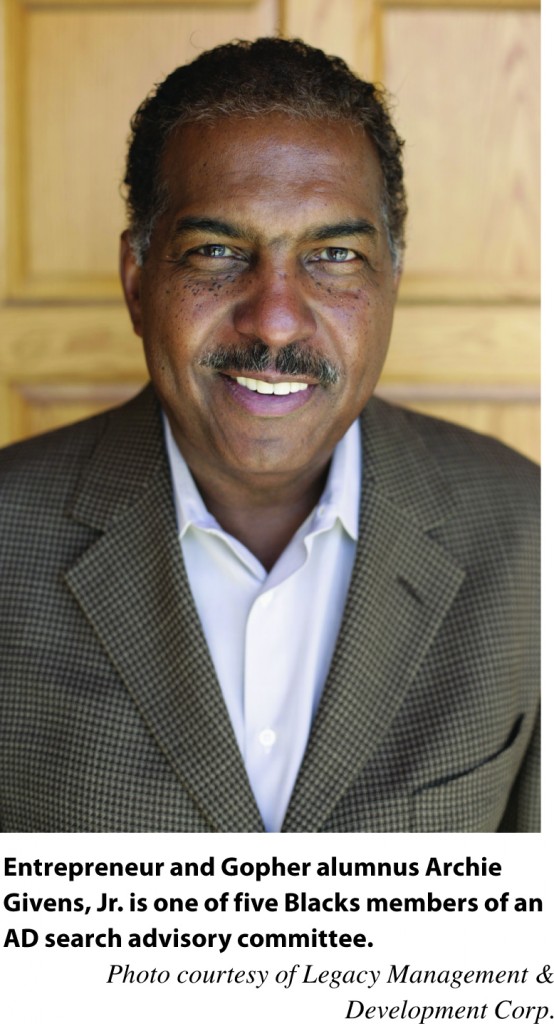 Will Blacks be included in the “thorough and inclusive process” University of Minnesota President Eric Kaler announced last week on his search for the school’s next athletic director. Let me count the reasons they probably won’t be.

One, the school is paying an Atlanta search firm $100,000. According to the Sports Business Journal, Division I schools annually conduct up to 45 searches for an AD, football or basketball coach — spending anywhere from $30,000 to $100,000 using outside agencies. (A University spokesman told me last week that the money will be coming from two sources: the athletic department and Kaler’s presidential account.)

The business magazine also says these search executives are “in an extraordinarily powerful position,” which lends to reason number two — Minnesota hired Parker Executive Search, whose senior leadership is all White, and all but one of its seven “principals/associates” also are White. If you don’t hire a diverse search firm, then I seriously wonder if their Rolodex cards of qualified candidates will have any other color than White.

McKinley Boston, who now is the New Mexico AD, was the main man who guided Minnesota from the abyss in athletic facilities to among the best in the Big Ten as the school’s first and only Black men’s athletic director (1991-1995). He later became vice president for student development and athletics. However, he rarely got credit for this but rather is more known for being forced out after an academic scandal in the men’s basketball program.

Other than Tonya Moten Brown, who was given temporary charge to oversee Gopher sports after Boston’s exit, the Gopher athletic department has been virtually White ever since.

If I had been asked by the U-M president to sit on his search committee, I would ask each prospect:

1. Will more than one Black be hired in your senior staff?

2. Will you fully commit to equity for all 25 sports, and not a weighted approach to only those programs that generates revenue?

3. Will inclusion be fully implemented in every area of athletic administration?

4. Will you establish a committee composed of “true community folk” to advise on how U athletics can better connect with the Black community rather than perfunctory activities?

“Hopefully I can have an influence,” adds Givens, one of five Blacks on the 21-member search advisory committee Kaler set up. “I think it is essential in this day and age when you look at the makeup of the student-athletes and everything else on a national level, it only makes sense that a person of color with some experience should be considered. Athletic success is the front door to the university and brings in a lot of money.”

Among his desired qualifications is “somebody who is committed to athletic success and putting competitive teams on the court or the field,” notes Givens. “It not only has to be athletics but academics as well. Somebody that understands that whole big picture.”

It should also be noted that Kaler and a four-person committee — all White — ultimately will make the final call, however.

On justifying outsourcing the AD search to the tune of six figures, especially with rising tuition costs for U-M students while school officials keep crying broke to state lawmakers, “I think to really do a good search, and to get somebody with the caliber and the experience” it’s worth it, believes Givens. “I think the money is going to be well spent.”

There are qualified Black candidates — and they can be located if they are seriously looked at. Givens pledged that he will point to Manual and Ohio State’s Gene Smith as good examples to look at.

“Based on our conversation, I will make a commitment to do that,” he says. “They are perfect examples that they can handle major college athletic departments and can have success above all the scrutiny from the academic and regulatory point of view.

“I’m excited to be a part of it, and hopeful I can offer good advice and help.”

Answer to last week View’s ‘Did you know’ question

Who was the Minnesota Twins’ first Black player? Carlos Paula made his major league debut Sept. 6, 1954 after being acquired by the Washington Senators from a team in the Big State League before the season. He played in 115 games in 1955, and batted .299. Six years later, the Senators left D.C. and relocated in Minnesota, and renamed the Twins.