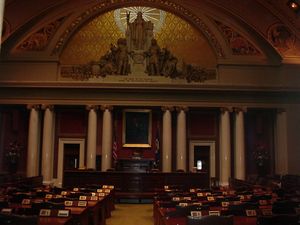 This item was buried at the end of Bluestem’s first Walking Dead episode, but it’s worth highlighting the gap between the Republican campaign talking points and the now-Majority caucuses’ actual governing style:

At a time when the state’s budget crisis cries out to be resolved and families clamor for jobs, education and whatnot, the Republicans are looking out for their own families first:

Getting used to the new routine of work and travel is being softened a bit this year for legislators.

Vogel said the Republican caucus has decided to implement a “family friendly” schedule that will end weekly legislative sessions by Thursday night or Friday noon, and then restart at noon Monday. In the past, sessions began at 8 a.m. Monday.

Vogel, an empty-nester with four grandchildren, said the new schedule will make it easier for legislators with small children to be home on weekends and stay involved with their families and communities.

Will the newly minted majority be proposing “family-friendly” policies for average working people, or are they just special now that they have control?

Throughout the campaign season, we heard Republicans talking about how government needs to be as well-managed as a family. Most people I know who are going through a financial crisis try to get overtime–or take a second job. Not this bunch–in crisis mode, cut your work hours and spend time with the kiddies.

Instead of asking legislators to put in a full week’s work, the Republicans cut the work week. Meanwhile, the Park Rapids Enterprise reports Recount costs for rural counties irk commmissioners, Because there’s no problem with underfunding local government in poor rural counties or asking extra time from those employed there.