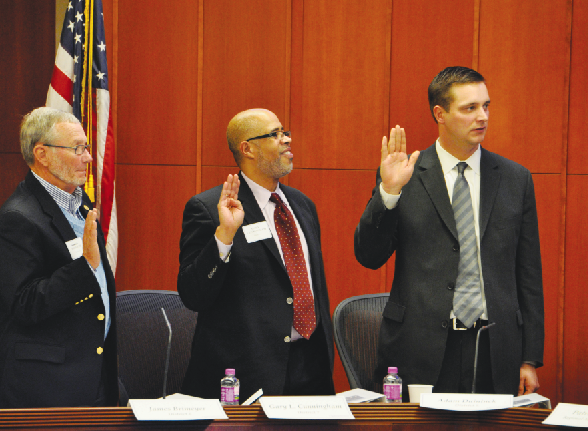 On March 9, Governor Mark Dayton swore in 15 new Metropolitan Council members. The council, a regional planning committee, works with the community to provide a framework for the region’s bus, water and park systems as well as providing public planning, forecasting population growth, and ensuring affordable housing.

Currently vice president of programs at the Northwest Area Foundation, Cunningham credits his appointment to the Met Council partly to work he was doing in Portland, Oregon with John Powell, previously with the University of Minnesota’s Institute on Race and Poverty. In Portland, Powell used data on housing and employment patterns in order to analyze how all members of a community benefited from opportunity structures. These findings were applied to issues of disparity.

In support of his application to be on the Metropolitan Council, Cunningham said he told the interview committee that it was time to develop a new covenant on how the Met Council operates.

“This isn’t about Blacks doing poorly and others doing better,” Cunningham said. “It’s about how as a community do we all do well together. How do we create the competitive edge that we need here in the metropolitan area so that we actually are a vibrant community, that we are safe, that we are a stable community?”

With Minneapolis and St. Paul having some of the most significant disparities in the nation when it comes to educational, employment, economic and health outcomes, Cunningham seeks to duplicate Powell’s work in Portland of aligning advocacy agencies.  “This place is such a critical time for us… Do we want a community where we don’t have access to services for low-income and middle-income people? Do we want a community that doesn’t build economic opportunities for all? Those are the choices that we have before us…and it’s not divorced from you as citizens to participate in this struggle.”

As a member of the council, Cunningham pledges to work to ensure that resources are fairly allocated. “If someone that came from a very humble background [such] as myself can do well in our society, I believe that the opportunity is there for everybody.”

Also introducing himself to the community was Adam Duininck, who moved to Minneapolis in 2002 from Wilmar, Minnesota, where he was born and raised. He has been working in the transportation industry his entire career.

That career began by growing up in a family construction company that his grandfather helped to start during the Depression. He has worked as an operating engineer on blacktopping crews with the Local 49 union operating engineers, and as a union organizer lobbying and advocating at the legislature.

Over the years, he says he has learned much from local transportation leaders such as Hennepin County Commissioner Peter McLaughlin and Minneapolis Mayor R.T. Rybak. As part of his duties on the Met Council, Duininck was appointed to the transportation committee. He says the history of the Met Council includes subsidizing costly development that wasn’t focused, encouraged sprawl, and was mainly subsidized by Twin Cities residents.

“There is a big split in the transportation community between what’s called an expansion view versus a redevelopment [view that is] focused on urban areas,” said Duininck, who wants to focus on developing incentives and penalties for developers who promote smart development. “I think the way to take advantage of the reality that we are now facing is to now make smarter choices with the investments that we do make.”

On economic disparities, Duininck says that through the operating engineer initiative he worked closely with both Summit Academy and HIRE Minnesota in training and retaining people of color in the construction workforce.

Speaking of construction projects where those working on the projects do not reflect the communities they are building in, he said, “Right now, frankly, to be honest with you all, it’s a recommendation sort of system…

“Where are the incentives for the folks that are doing a great job? And where are the penalties for the contractors and the firms that aren’t?” Duininck says he wants to work on developing structural changes to improve opportunities for people of color.

Duininck talked about the legislative auditor report, “Governance of Transit in the Twin Cities Region,” that was completed in January of this year, starting a debate at the legislature on the current structure of the Met Council. The report states, “Because council members are appointed by the governor rather than elected, many stakeholders we interviewed did not think that Met Council members are sufficiently accountable for their decisions.”

“The folks of the legislature, some of them want to see the Met Council go away,” Duininck said. Though Duininck said he has no strong opinions on the internal governance process of the council, he does believe that it should have more accountability measures in place.

He believes the Met Council’s culture and the people involved over the past eight years have made it ineffective and that many of the criticisms will be laid to rest by the newly appointed members and chair. “I think that what you’re starting to see out of the new Met Council and what you will continue to see are council members that are engaged in the community…[and] engage with other elected officials.”

During the question-and-answer session that followed, both members pledged to be visible and communicative with their constituents during their council appointments.