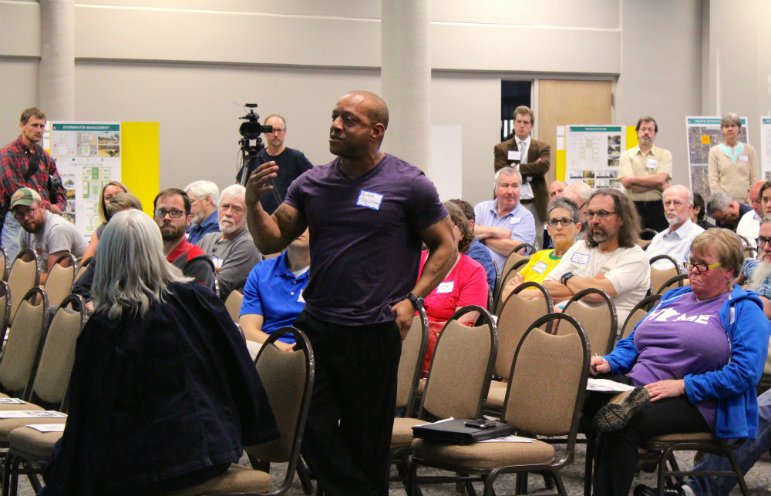 A billionaire team owner, a semi-vacant lot in disrepair and two cities in constant battle over permanently hosting Minnesota sports teams. These are the factors that have swiftly sent the city of St. Paul closer and closer towards helping finance a multi-million dollar stadium for a soccer team not yet playing in the major league.

Minnesota United FC was extended a Major League Soccer invitation just over a year ago in March 2015. Since then, team owner Dr. Bill McGuire has been in talks with St. Paul Mayor Chris Coleman and the St. Paul City Council over how and where to build the requisite stadium in time for a 2018 opening season.

To many, it seems the team has struck gold with an underused 10-acre plot of land in the Midway neighborhood just north of University and Snelling avenues. The 10-acre site of the stadium is partially owned by the Metropolitan Council, having formerly been used as a bus barn site. On Feb. 23, the Met Council approved a long-term lease with St. Paul for the site — with the plan that Minnesota United will pay $556,620 for 52 years to lease it from the city. Additionally, the bus barn site has been property tax exempt for over 50 years, and on May 11, the Minnesota Senate passed a bill extending the property tax exemption for the entire site of the stadium for the next 50 years. RK Midway, the developer who owns the surrounding 24.5 acres to be used for private development, will lease 10 acres of the former bus barn site from the Met Council for approximately $550,000 and will then pay as little as $85,000 a year to lease it. 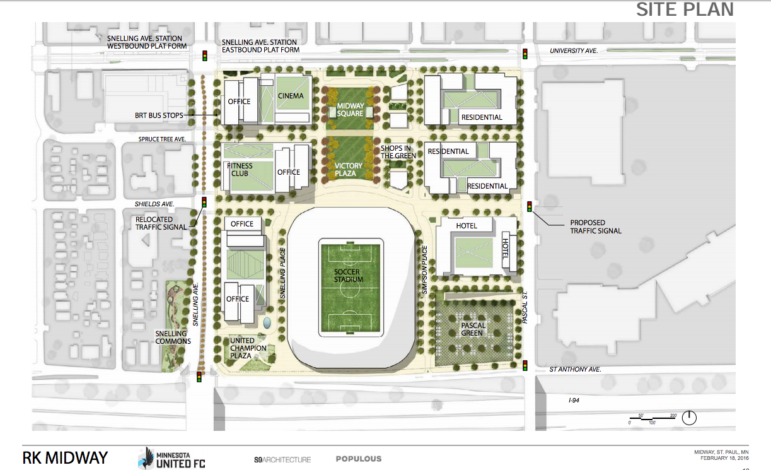 On Feb. 18, developers RK Midway and Minnesota United FC presented a site plan for what development around the new stadium could look like. The new plan does not include any of the current businesses already on site.

This large redevelopment of land would be another disruptive undertaking in the Midway neighborhood which saw the construction of the Green Line from 2010 to 2014. For local business owners, the stadium feels like an unpredictable project coming into their neighborhood.

“I’ve lived here 24 years and everything is different now. People jump off the Green Line and disrupt my neighbors. Sometimes, I’m scared for my customers. We need more good people,” said Fasika Restaurant owner Mendern Gebretsadik. For Gebretsadik, the stadium would be a welcome addition to the neighborhood if it brings more foot traffic and increased business.

“The stadium is exciting — I hope it brings more people,” Gebretsadik said.

Afeworki Bein, the Eritrean owner of the beloved Snelling Cafe, has mostly positive feelings about the proposal as well.

“It’s about time. I hope it draws a lot of people. The game is getting interesting to people in Minnesota and perhaps they’ll come here to watch the games. Traffic is not a concern because we have a parking lot. When this area improves there may be a rent hike, and working, poor people may be pushed out of here. But that’s a long-term effect. We have a lot of stadiums — but it’s better than [the land] staying idle.”

Kathy Stransky, owner of Midway Used and Rare Bookstore at the corner of University and Snelling, is not so optimistic about the stadium’s effect.

“It doesn’t bode well for the neighborhood. There has been no talk with business owners. The city has plans for what this neighborhood should look like and they’re shoving this stadium down people’s throats like the light rail,” Stransky said.

Jeanne Masanz, co-owner of Big V’s, a bar that sits across from the Green Line stop, is similarly resigned to the city’s plan for her neighborhood.

“A lot of people come hang around off the light rail but it hasn’t helped business a lot. The stadium should help. There’s been no local business forum. But you can say and do all you want, it’s not gonna do anything,” she said.

St. Thomas University professor of justice and peace studies Michael Klein sees this as the most disturbing aspect of the proposal. For Klein, it’s hard not to notice the way the rushed proceedings have excluded the broader public, silenced oppositional force and helped bypass a real democratic decision-making process.

“I think it’s important we ask if we are putting economic development over democracy. That’s a denial of civic agency. This was an opportunity to enhance democracy, to encourage participation. It doesn’t seem like there’s been much effort in this way.”

Not to mention the historical significance of the land where the stadium will live.

Neighborhood has seen upheaval before

“St. Paul has a bad example of disruptive major development. A painful past rises for those who know Rondo,” said Klein.

When the route for I-94 was planned, African American home and business owners of Rondo were paid a fraction of the value of their properties when the government claimed their properties through eminent domain. And anyone who fought the eminent domain order was eventually cleared out of their homes by law enforcement. Investments that took generations to build, in the community that gave us the likes of Gordon Parks and Roy Wilkins, were gone.

“During that development, people were ill-informed and didn’t have time to organize. The decision felt made before there was time to grapple with its effects,” said Klein.

The trauma of that time hasn’t gone away. While the resilient people of Rondo have taken back the neighborhood with celebrations like Rondo Days and the Rondo Community Outreach Library, in some ways the community still hasn’t recovered. According to data from Minnesota Compass, 99.1 percent of all single-family home properties in the Frogtown-Thomas-Dale area along University Avenue are valued at less than $200,000 as of 2010. The generational wealth that had been built up before I-94’s inception is gone, leaving the area open to developers looking for a good price.

“As with any development, there’s the question of who is it for? Who is it going to serve? It should be for the people who live here, own their homes or rent and have raised their families here, and invested in the community. There should always be a commitment to the community here,” said Isabel Chanslor, St. Paul resident and director of the business lab at Neighborhood Development Center.

According to lawyer, community organizer, and Midway resident Tom Goldstein, the stadium is just another public investment in a private venture — a deal made behind closed doors that does not serve the people of St. Paul.

“This is a land grab,” say Goldstein. “This is just a handout to billionaire team owners.”

More than anything, Goldstein worries about the opportunity cost of this deal.

“After 10 years in office, he [Coleman] has done nothing to promote the Midway and now uses it to get this deal. This only benefits [developer] RK Midway and the stadium — it’s a gift to them. The subsidiaries to RK Midway are a huge loss to the city. The rhetoric has been that it is vacant, not developed land. But we need to hold RK Midway accountable for that. We don’t know what that land is worth.” 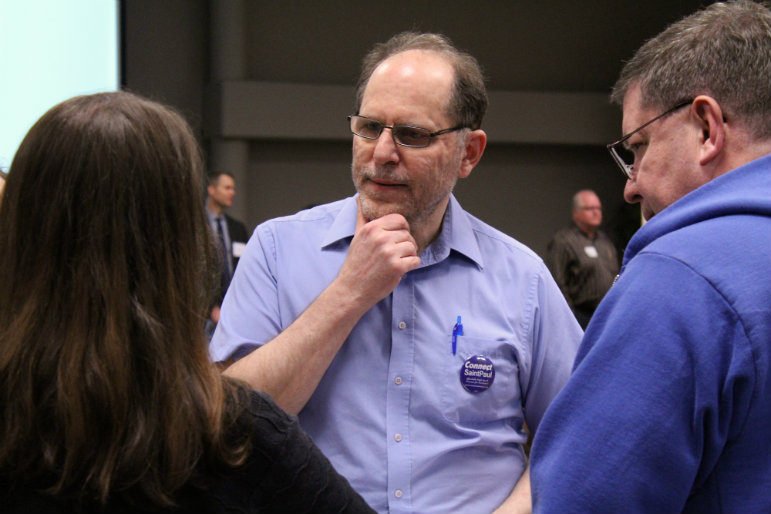 City Councilor Jane Prince echoes Goldstein’s concerns. With 35 percent of St. Paul non-taxable due to NGOs, religious institutions and schools, Prince thinks extending a property tax-exemption to the stadium is a bad plan.

“We have a city to build and jobs to create — a tax base to expand. I feel like we can’t be the masters of our own destinies when we are dealing with big business. Part of the promise is that it will attract development. If that happens, that will be good. But I don’t think we should be rolling over for another sports team. There are too many unknowns.”

What we don’t know can hurt us

For a project that will cost the city more than $18 million for public infrastructure, there are quite a few unanswered questions that have left many skeptical about the deal. There has also been little opportunity for community feedback and a very quick procession of events.

The deal was first brought up in August 2015, the City Council had to vote by March 2, and a Community Advisory Committee for the project hand picked by Coleman has only been meeting since December. And while those CAC meetings are open to the public, people outside of the committee were not permitted to contribute or ask questions apart from a 15-minute Q&A session with the mayor on March 18. During this short opportunity for public feedback, many concerns were raised — predominately about traffic, noise pollution and parking demand that will surely accompany a 21,000 seat stadium.

According to CAC member and Midway resident, Jonathan Oppenheimer, the task force felt there was limited time to come to one singular recommendation — even after adding an additional three meetings to the initial CAC meeting schedule.

“The whole thing has been rushed. There should have been an extra year of planning. I think that we need to press the city and the team and RK Midway to answer questions about how it will affect the neighborhood. It’s our duty to push for details. We’re not privy to decisions behind closed doors.”

True, the details about surrounding development are just visions for what the space could look like. While McGuire and RK Midway have released images of an “Urban Village,” there’s no promise the 24.5 acres surrounding the stadium will actually be developed by private companies once the stadium is completed.

This is precisely Oppenheimer’s concern.

“My greatest fear is that it will only be a stadium. No other development will occur. There are too many great unknowns and we’re really going on faith. I don’t want this if certain things don’t come along with it,” Oppenheimer said.

Coleman and City Council President Russ Stark do not share this concern, and fully bank on the taxable private development around the stadium more than making up for the loss in property taxes.

Goldstein, on the other hand, believes Oppenheimer and other members of the CAC are going to be greatly disappointed.

“Real estate value will increase in the neighborhood if people invest — and there is no promise that developers will want to. Zero commitments have been made. And, historically, stadiums are disincentives to invest.”

Further, the proposed “Urban Village” mostly includes multi-story condos, restaurants, bars and some public green space. For Goldstein, this is not enough.

“All St. Paul does is build things, but entertainment is not a development plan. And the construction jobs are not particularly high-paying. Who’s to say if the contractors will even be from St. Paul?”

Thus the question remains, if there is development, and there is no promise there will be, how will that development affect the Midway neighborhood?

“Rents in the Midway are relatively low, but with development comes an increase in rent. We may see a difference sense of community coming into the neighborhood” said Klein.

“We need to find out what we are entering into. That’s our due diligence,” said Councilor Prince.

If the deal goes through, will the city be losing out on tax revenue it desperately needs? Will tax revenue flood in with major development, as local businesses and renters are driven out? Or will a stadium be built using public money to the detriment of a neighborhood that had very little input to begin with?

As Klein put it, “When considering this deal, we have to ask who benefits most? Who might see benefit, but also costs? Who is going to suffer? And who is not at the table at all?”

Ways to Learn More and Get Involved:

Email public comment to SnellingMidwayComments@ci.stpaul.mn.us by July 6 for issues regarding parking, noise, traffic, air quality and other findings in the Alternative Urban Areawide Review.

Additional comments can be sent to Kady.Dadlez@ci.stpaul.mn.us.

[Editor’s Note: This article has been corrected from its original version to with regard to the size of the bus barn site and potential construction date.]