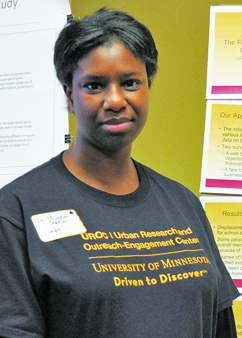 Since discussions with community leaders were first initiated in 2005 and after its doors opened in 2009, the Urban Research and Outreach-Engagement Center (UROC) on Plymouth Avenue North in Minneapolis has been viewed suspiciously by community residents. UROC’s mission, “to build long-term, purposeful collaborations in and with North Minneapolis,” was a vision of school Senior Vice President Robert Jones, who will become president of the University of Albany (New York) in January. Now that Jones is leaving the school, what about UROC’s future?

Many community residents and others wondered out loud about what type of “research” the University of Minnesota would be conducting on the city’s North Side. UROC Executive Director Heidi Lasley Barajas told the MSR last week that a four-hour late-afternoon event held Nov. 9 was making good on the center’s “transparency” pledge to the Northside community.

“We promised that we would let people know on a regular basis what [we] are doing,” she explained. “We are really focused on community-designed research… People can come in and look at our research projects so [see]… what we are doing in the community.”

Last week the public toured the 22,000-square-foot UROC, a former shopping center, to see what’s been happening there during the November 9 “Community Day.” U-M Business and Community Economic Development Executive Director D. Craig Taylor says he believes that though understandable, community fears have subsided to a certain extent if not totally disappeared.

“This is not an overnight process” Taylor said. “Part of our being here is about learning and understanding how we intersect and how we support the community. So for us to come in with our minds all ready made up is not the right approach.”

Barajas says that the community wanted UROC to focus on three main areas: community and economic development; education; and health and wellness. “That is what they wanted us to look at,” she pointed out. “We want to build this relationship with the community and to have the community help inform university researchers to really address the problem.”

“The hallmark of UROC is community engagement,” added Dr. Shonda Craft, who researched the area’s mortgage foreclosure problem. “Community engagement can mean a lot of things to different people. But the way we approached it was really taking the community concerns and integrating that into our research process.”

Her foreclosure research project “started in January 2009,” said Craft. “This project really was a response to community concerns that were brought up around mortgage foreclosures, and people feeling like the human element of foreclosures were not being reported in the news. 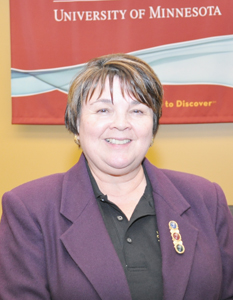 “We interviewed nonprofit organizations, people who provide services to individuals around foreclosures, and we also interviewed several businesses along the West Broadway business district to ask them what they thought the impact of foreclosure was on families and in the community in general here in North Minneapolis.

Right: Heidi Lasley Barajas is executive director of the U of M’s Urban Research and Outreach-Engagement Center. (Photos by Emmett Timmons)

“What we found was there were an emotional pull and a psychological pull, and people also were very interested and impacted by the financial aspect of this as well,” said Craft. “It really did happen at all levels: individual, family and community.”

Earlier this month a system review taskforce selected by U-M President Eric Kaler recommended that Jones’ office, including Jones’ role as the visionary behind the project, be eliminated. Many of his reporting units were integrated “into the fabric of the university,” according to the taskforce report released November 1, causing UROC to be structured under the provost’s office.

“I have no concern about the support of UROC,” noted Barajas. “The president has personally and publicly stated that he believes UROC is one of our most important connections to the community. Part of our mission is the change the university works [towards] with communities, and he want to see that mission comes to fruition. He is very supportive of UROC.”

Barajas was on the “short list” of individuals taskforce members contacted to determine restructuring options. “I felt that [because] they’re asking to talk to UROC [staff] specifically about what our concerns [are] and where we thought we should be in terms of the university’s plans…[they] made us feel better about the importance that we had in the president’s eyes… They really listened.”

She also predicts that U-M Public Engagement Associate Vice President Andrew Furco “will make sure that UROC gets the attention that it needs.”

“I fundamentally believe that the vision [of UROC] is intact, and we will continue to go forward,” concurred Taylor. “I believe the investment in this work will stay.”

Nonetheless, Jones will be missed, said Barajas. “Dr. Jones made it possible for me to actually do work in [my area of expertise] and put that to work in the community,” she said. “I’m a faculty of color and there aren’t that many of us, and that he [Jones] would allow me to take a position like this one, I don’t know if anyone else would have given me that opportunity. So personally this is a big loss.

“What we can’t replace is the person of Robert Jones. I think that is why [the university] chooses not to. But what he taught me is when you have a vision, you also have to have perseverance.”

As a result, Barajas says she envisions “a corridor of partnerships” between UROC, the Minneapolis Urban League and NorthPoint Health Center — all three buildings in the same vicinity of Penn and Plymouth Avenues — soon being formed.

“The core of our work is partnerships, both at the university and in the community,” said Barajas. “We have this amazing location at Penn and Plymouth, and we have these incredible institutions. We really need to [be] thinking about as a corridor what can we bring to the community, and working even more closely [than] we do now.”