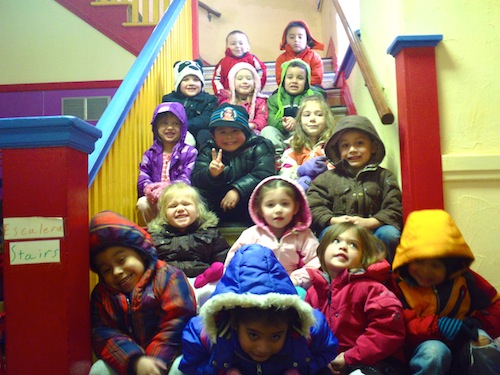 When early education scholarships became available last fall in Minnesota, the $2 million in funds were used up within one month. Thanks to new legislation  spearheaded by Governer Dayton, $23 million will be available for the 2014 fiscal year.

“It will be interesting to see the effect of the $23 million this year,” said Barbara Yates, Executive Director of Think Small, the nonprofit organization that administrated the state scholarships for Twin Cities metro area. “Folks are hoping it will start increasing the results.” Think Small has not yet been awarded the role of administering new cycle of scholarships yet, although they have applied through the RFP process.

Think Small began administering last year’s state scholarships for the metro area in October, and by November they were gone. “Right now, the amount of money is so much less than the demand,” Yates said. Yates noted that some advocates said $150 million was needed.

Yates said she couldn’t say how much funding would be available this coming year through Race to the Top. “They are sorting that right now,” she said. Part of the uncertainty lies with guarantees that children who were funded as three-year-olds are eligible for funding for a second year, and siblings of children who have already received scholarships are also guaranteed a scholarship in the same program.

With 42,910 Minnesota children between three and five from low-income families (according to a Minnesota Department of Education report), the approximately 8,000 scholarships will only provide for 19 percent of those families.

Sarah Clyne, the executive director of Joyce Dual Immersion Pre-School, said that last year the state and Race to the Top scholarships allowed the school to provide additional scholarships for students.

Shoni Millard, a parent at Joyce had received a scholarship from Joyce that reduced the cost, but then last year received a state scholarship that made tuition free, after Joyce’s social worker encouraged parents to apply. “It was a blessing,” she said.

Part of what Millard loved about Joyce is that there’s such a diverse mix of families, including both native Spanish speakers and native English speakers as well as bilingual families, with a wide range of socio-economic backgrounds. The scholarships ensure that diversity. “If it was just open enrollment, it would quickly fill up with well off white kids that are learning Spanish,” she said.

Still, as a single parent, even with the scholarship Millard found difficulties with the part-time program. “I scrambled to make it work,” she said. Though Joyce does provide transportation one way for parents, it was complicated for her to figure out transportation with infant twins who were also in day care in addition to her work schedule.

According to Clyne, Joyce’s connection to the Early Childhood Education community and close professional connections to organizations such as Think Small, which administered the scholarships, helped its parents. When funds became available, the school’s parent coordinator contacted specific families and helped them walk through the application process. “It’s not a complicated form,” she said, “but it’s paper work.” Joyce had its support mechanism in place to help families make sure they had all the correct documentation, such as proof of income.

The ratings matter, because for state scholarships last year, only the three- and four-star rated programs were allowed full scholarship funding (which last year was $4,000), whereas one- and two-star rated programs were only allowed $3,000. Providers that were signed up for Parent Aware, and not yet rated were only allowed $2,000 scholarships, according to a cached page on the Parent Aware website.  The new education bill  passed in May is even more strict, allowing scholarships only to schools with three- or four-star ratings.

That is problematic because a study of the pilot program of Parent Aware found that “Parent Aware ratings are not accompanied by proportionate gains on observational measures of quality.”

Yates said that a study done on a pilot scholarship program several years ago showed children with the most need were being served. In 2007, the state legislature approved a similar pilot scholarship program for funding private early education programs.  The program affected 1,100 children in Blue Earth and Nicollet Counties, North Minneapolis, the City of Saint Paul, and Wayzata School District, according to this report from the Department of Education. Children served in the Pre-Kindergarten Allowances Project came from diverse backgrounds, with 40 percent of the children reported to be African-American, 14 percent White, 13 percent Asian, and 9 percent Latino. According to a Final Report by SRI International, three-fourths of the families had incomes of less than $30,000 per year, and about two thirds were eligible for free or reduced lunch. “It would seem things people were doing were working,” Yates said.