A couple of remarkable things happened late last month when the Minnesota Management and Budget office released its economic forecast.

First, of course, Minnesotans discovered the state was $1 billion less in the hole than previously thought.

Second, when the state’s chief economist, Tom Stinson, was done speaking both Republicans and DFLers said in effect, “Aha, he’s proven our point.”

Republicans were pleased because they heard Stinson say that the reason for the rosier economic outlook in Minnesota was because the feds had not raised taxes.

DFLers were pleased because they heard Stinson say that tax increases were “marginally” more helpful to the Minnesota economy than budget cuts.

So who heard Stinson’s message correctly?

In this case, DFLers probably had better hearing than their Republican colleagues. 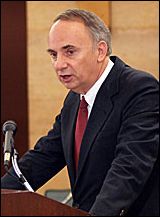 Before proceeding, some background: Economics and forecasts at the level Stinson discusses them are filled with nuance. Beyond that, when he talks about decisions people make about their stock portfolios, he’s not talking about the nickel-and-dime decisions most of us make. He’s talking about the impact of the very big hitters.

“Ninety-five percent of the capital gains [reported in federal and state income taxes] is from the big guys,” Stinson told MinnPost in an interview.

When Stinson said that tax policy in Washington had created a better-than-anticipated economic outlook in Minnesota, he was NOT talking about the controversial extension of the so-called Bush tax cuts.

Capital gains rate extension a big help
He was talking about the extension of the lower capital gains tax rate. That rate had been scheduled to increase in 2011 from 15 percent to 20 percent. Because all state forecasts are based on “current law,” it was assumed that the 20 percent rate would be in place when the November forecast was made. (Remember, the November forecast showed that Minnesota would be running at a deficit of more than $6.2 billion.)

The higher rate, Stinson said, would have meant that fewer people would have “turned over” their stock portfolios in 2011 to avoid the higher tax rate.

But the heavier hitters?

By extending the lower rate, the feds prompted investors to turn over their portfolios at a higher rate than state economists had anticipated in the November forecast. That means more capital gains will be reported, and that means more revenue coming into the state coffers that originally anticipated.

So, in that regard, the Minnesota Republican legislators did hear what they wanted to hear. The extension of the Bush income rates had nothing to do with Minnesota’s gain because, under current law forecasting, those already had been figured into the November forecast.

Spending cut vs. tax increase
BUT …

Start with the overall concept: A tax increase, as opposed to a budget cut.

“Take a program like food stamps,” said Stinson. “If you cut the amount of food stamps, there’s a direct dollar-for-dollar reduction in spending.”

If you raise taxes?

At least some of the tax increase the wealthy would pay likely would come out of their savings, rather than forcing them to reduce spending, Stinson said. “That’s the principle behind this.”

A tax increase on the biggest wage earners in Minnesota as Gov. Mark Dayton has proposed to help close the budget gap?

In theory, the greater the wealth of those being taxed, the less the impact on their standard of living.

“An increase will reduce spending by some amount, but I can’t tell you the actual amount,” said Stinson, who has served under governors dating back to Rudy Perpich.

“Let’s take your hypothetical pro basketball player making $2 million a year,’ said Stinson. “He won’t change his behavior much based on paying more income taxes. He may reduce his savings, but he will not reduce spending on clothes, cars and housing. But, if you’re talking less income than that, but still a very comfortable lifestyle, it [a tax increase] is likely to have a little harder impact.”

Harder impact in that case might be a slight cut in consumption, or a drawdown in savings.

Orgaz and Stiglitz take this argument that tax increases on the wealthy are healthier for the short term of economic stability than cuts.

The wealthier you are, they say, the more likely it is you spend money outside your state.

That would seem to say that in Minnesota, a Dayton proposal to tax the wealthiest would be better than a Republican plan to reduce spending in such areas as Human Services. Those Human Service dollars end up in the hands of local hospitals, doctors, nurses and grocery stores, while additional tax dollars owed by the wealthiest likely would result in fewer dollars saved or spent in Paris.

But it should be pointed out that economists do not say higher taxes on the wealthy are good. They only say they’re the “least damaging mechanism for closing state fiscal deficits in the short run.”