I’m sure the frequent readers of streets.mn have already viewed last week’s buzz map of Minneapolis. It depicts Minnesota’s largest city with a solid touch of satire and preconceived notion poking-fun-of. If you haven’t seen it, here it is below: 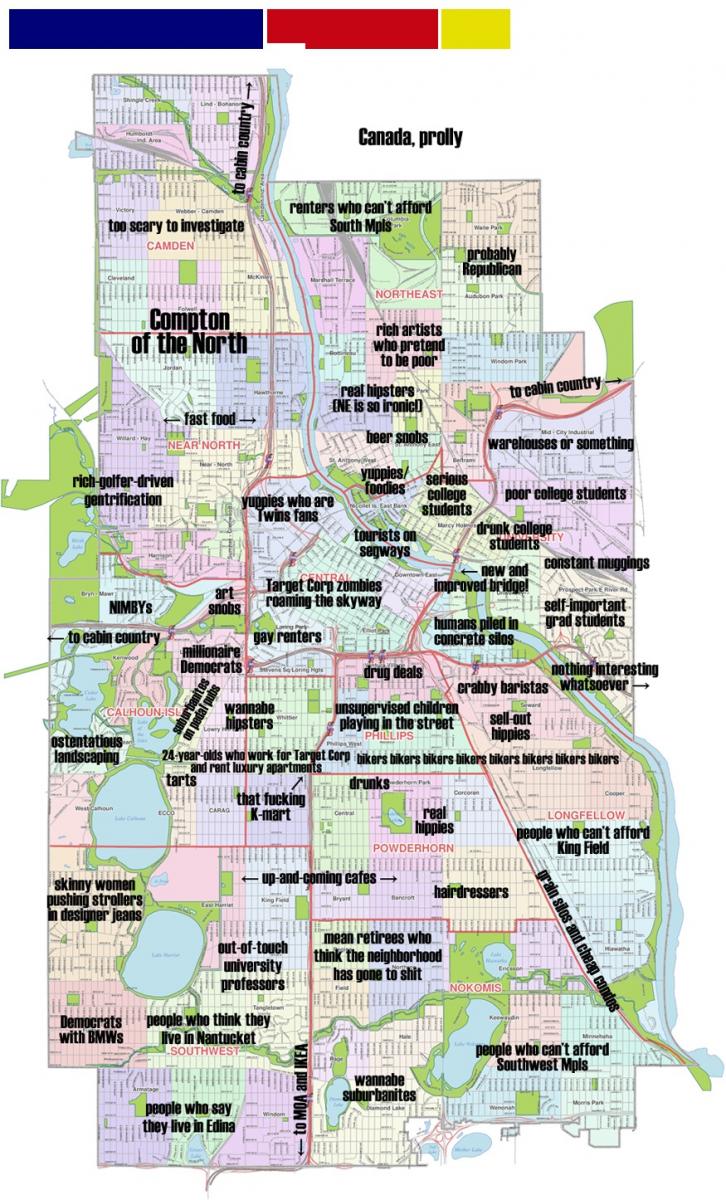 The cause of the Great Minneapolis Internet Fire of 2013. Myth has it that Mrs. O’Leary’s cow wrote it and it later burned down one-third of the local IP networks.

Obviously, this post may make you feel differently from your next door neighbor. You may feel like the description of your locale is right-on; on another hand, you may start to feel your blood boiling from your idealistic Wedge neighborhood being called “Wannabe Hipsters”. (I can imagine the replies now… “To be fair, I lived here way before Target execs thought it was cool.”)

Before I say anything about the map itself, I’ll do the lawyer-like thing and list a definition of the word “satire” from dictionary.com.

“1. the use of irony, sarcasm, ridicule, or the like, in exposing, denouncing, or deriding vice.”

As far as my opinion goes, I don’t think it is in my best interest to say whether or not I liked the map. What I can say is, however, that I agree that the map composer (who later requested their name be removed due to the numerous complaints on the original website) used a generous amount of satire to describe the prejudice-based thoughts of peoples PERCEPTIONS of the areas. The “ridicule” element of the dictionary description of satire is very present. I really do think that the author was ridiculing the uneducated perceptions that these areas receive, not directly and ignorantly labeling them. Yes, the whole “Compton of the North” label may have been a little harsh, but at the same time, I think the map composer wasn’t claiming it to be the end-all-be-all description of North Minneapolis. Rather, it summarized (exposed and denounced) the vice–ridden thoughts that many have of the area. (These thoughts are based off of a comment from who I think is the author of the map.)

Like I said, it isn’t my place to say if I liked the map or not, to loudly proclaim its success (“WHOO! It’s about time someone pointed out Minnesota Nice’s edginess!”) or to solemnly denounce its message (“Your relentless mockery disgusts me”). What I can say, however, is that I am extremely proud to live in a city where these types of discussion occur.

While you are at it, go ahead and take a look at the other maps on the Judgemental Maps site. Although the Minneapolis map may have had unintentionally direct racist undertones, there were no full-on shout-outs to racial differences. On the other hand, take a look at Chicago, Phoenix, New York, and Denver. The comment numbers on these much harsher maps on the evening of Sunday, April 28th is as follows:

And our map of Minneapolis? 144 Comments.

My main point in this comparison is that the conversation of racial, cultural, and class equality is happening in Minnesota. People in the great northern state actually give a crap about what people say and think of others. People are readily willing to defend others in the wake of prejudice, and the fact that people cared so much to thoughtfully criticize the carefully worded descriptions in this map is a virtue that should be acknowledged.

It also indirectly says something about how Minnesotans carefully accept and intelligently respond to certain types of things, including new developments, gentrification, transportation politics, and general civic pride. People care about what people do to and say about their neighborhood, about their city and state. When a new apartment building is proposed or a street is planned to be altered, citizens of Minneapolis (and St. Paul too) are often active at the community meetings. It was in the “Beer Snobs” neighborhood where the proposed I-335 was shot down and became one of the very few cancelled interstates. Although there are probably a large number of exceptions, a good majority of the population in Minnesota want to make sure that “all men are created equal”, that any stab at a certain location can be defended and argued, that any proposed land use or infrastructure project is questioned, intelligently altered, and built with the approval of the citizens.

Of course conversations like this occur in Chicago and Phoenix, and of course some people may have overreacted to the map, but the fact that the Minneapolis map gained so much attention, garnered so much discussion, and even had a Star Tribune article written about it, is a praise to the population of the Gopher State.