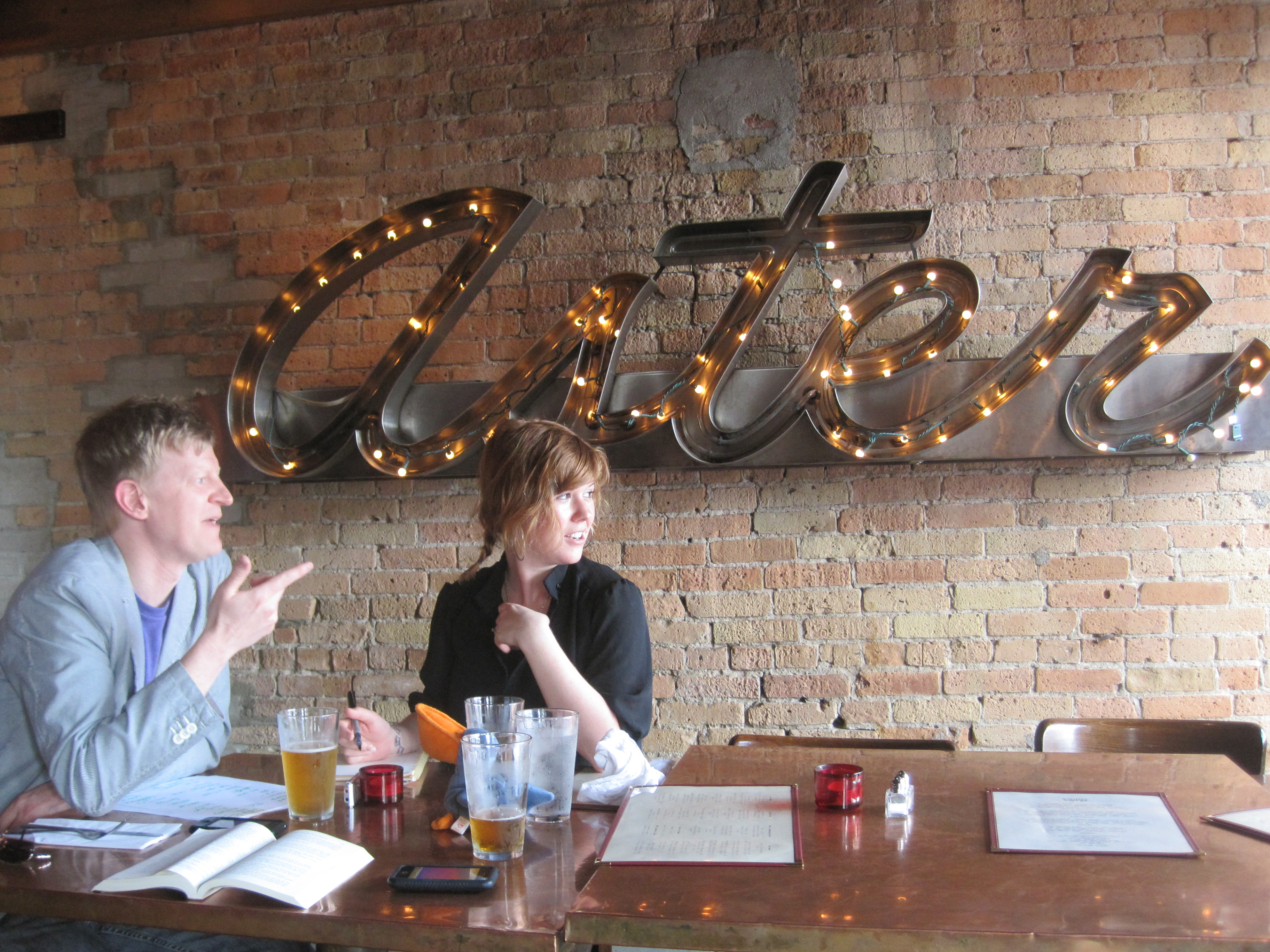 Although you might now know it by my attendance these past two months, I love Books & Bars. My last visit to the event was back in May when we read the Pulitzer Prize winning A Visit from the Goon Squad by Jennifer Egan. This was Jay Gabler’s first foray into public group book loving, and he came away with a tepid review of the experience. While I’ll readily admit that the event isn’t for everyone (B&B isn’t even always well received by devoted bibliophiles), I am of the opinion it is something that those who like a free show, enjoy discovering new books, and who need a reason to go out and have a few drinks should experience at least once.

If trying new things just isn’t on your list of reasons to read a book and then head over to the lovely Aster-on-the-Mississippi once a month (twice in the cold, bleak, half-drunk-anyway Minneapolis winter) for a discussion, then perhaps I can inspire you to give it a shot by way of my (almost) undying passion for Books and Bars, with a little help from an interview I did with Jeff Kamin, producer and host of the event.

The first and biggest reason to go: the books. One rule of Books & Bars is that Jeff Kamin (almost) never doubles up on authors–except once, with Stephen Elliott, author of The Adderall Diaries, but “everyone blocked out that first time.” Kamin explains that in 2004 the group read Looking Forward to It, or How I Learned to Stop Worrying and Love the American Electoral Process, “about the [2004] democratic election campaign trail, then the vote went the way nobody thought it would and nobody wanted to talk about it anymore. They were pissed at that discussion. This was still under Lance’s leadership, and so he picked that one. But yeah, we don’t repeat authors.”

I had to learn this rule in a sort of embarrassing way. When I first started attending, I thought I was going to blow everyone’s minds by suggesting The Wind-Up Bird Chronicles by Haruki Murakami via the Books & Bars message board, but as it turns out, the fact that Murakami is an amazing author isn’t some amazing literary secret that only I know–the group had read Kafka on the Shore back in 2009.

How do they pick the books? Kamin keeps his eyes and ears out for “the reviews, word of mouth, and consensus”–sometimes he’ll offer up a list of potential books and select the ones that make the people most excited. But, he won’t just pick anything at the willy-nilly desire of the masses; there are some criteria that must be met. For instance, the book has to be “do-able in the timeframe, whether it’s a month, or two weeks,” the book should be “discussion worthy” (this one came with actual air-quotes as this is a notion greatly in the eye of the reader), and must be available in paperback–which is something that, as an attendee, I’ve always been really grateful for, because–even at Magers & Quinn–those hardcover books can cost quite a bit.

The second reason to go: Jeff Kamin. He has a background in improv, and sees the event as a live show. There’s a reason he was asked to host the Minneapolis Book Awards, and a reason that ceremony is being remembered as one of the best. “I come prepared with notes on the author and on the book, and all of that. But, I have no idea what everyone else is going to say. And, I like listening and reacting to that, and then keeping it moving to the next one. And then if you say something that I can use later, and it’s some sort of a callback, and we’re all there in the moment–it’s a fun part of the evet, and that’s all part of the improv,” Kamin says. “It’s never the same show. You have to be there.”

The third reason the go: The Aster Café is amazing. Though the servers aren’t known for an always accurate check at the end of the night, they are always incredibly nice, warm, and happy to chat it up for a little while, sometimes even offering their own insights into the books being discussed. They are also pretty helpful when it comes to Name That Tune (which Kamin also hosts) on Tuesday nights. The food and drink specials for Books & Bars allow me to indulge many of my hedonist desires, sometimes treating myself to three or four cheese plates in a night, and many, many tasty Fulton beers. Granted, the end result is a bill greater than still more than I am typically apt to spend on a Tuesday night anywhere else (especially if I order the chorizo flatbread pizza), but if I plan for it in my budget, then I can stuff myself and still pay the rent.

Food, booze, and staff aside, The Aster Café has what the French call ambiance. Low lighting, a beautiful view of the Mill City, and fresh, interesting flowers daily on each table–it’s a perfect setting for a delightful discussion about books. Aster Café, I’m going to name my first child after you.

The fourth reason to go: It fosters a sense of community. Who knows, maybe you already have a community to call your own. But, for someone relatively new to Minneapolis, out of school, and not a regular at church, joining a “book club” is a great way to meet people and begin growing connections to the city.

One final reason to go: to get mildly drunk and do that thing you did in high school where you raise your hand to show off about how deeply you understood the book, but this time it’s over a microphone, and you’re a little drunk, and even when you say something stupid, it’s all in good fun, and no one is going to push you into a locker later, or hit you in the head with a kickball intentionally from across the room with what seems like the most improbable accuracy.

In all honesty, I don’t have the best time, every time, but nothing is great all the time. Sure, there have been books I didn’t like, jokes that failed to land, and nights where the crowd just didn’t have synergy, but overall, (aside from one alliterative taco night) has there ever been another reason to get excited for a Tuesday?

Next month at Books & Bars: Room, by Emma Donoghue, which is written entirely from the perspective of a five-year-old who believes his room is the only world that exists, until one day his mother enters and explains to him that there are worlds beyond his room, and that they must escape to those places. 6:00 p.m. on Tuesday, August 9 at the Aster Café. Call for reservations: 512-379-3138.