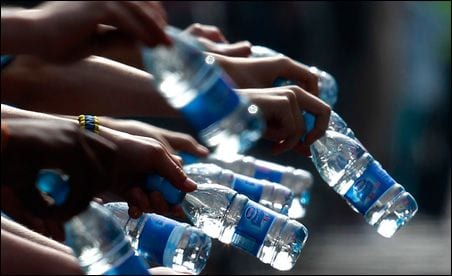 A quarter of the blacks and Hispanics surveyed serve their children bottled water -- contrasting to 8 percent of white parents.

At least one question needs asking regarding that bottled water and poor minority kids story out of Milwaukee, and Jose Gonzalez asks it: How are their pipes?

By that he means the home water pipes that transport what we assume starts out as clean, safe, state-approved drinking water to the kitchen faucet. Think of it this way: poor kids mean poor parents mean poor housing, which could mean rusty or otherwise bad pipes.

Gonzalez (left), director of the office of minority and multicultural health with the Minnesota Department of Health, was responding recently to my inquiry on his reaction to that study on thirst-quenching habits.

Let me recap. A poll published in the Archives of Pediatrics & Adolescent Medicine last week reported that in one particular survey of almost equal numbers of whites, African American and Latino respondents, minority parents were more likely to give their children mostly bottled water.

A quarter of the blacks and Hispanics surveyed serve their children ONLY the pricier bottled water — contrasting to 8 percent of white parents.

The survey of 632 parents visiting an emergency department in Milwaukee was conducted by Dr. Marc Gorelick and colleagues from the Medical College of Wisconsin in Milwaukee. Reasons cited for downing the bottled stuff included believing that it’s safer, cleaner, better-tasting as well as more convenient.

Media reports, of which there were quite a number, tended to highlight the seemingly puzzling tendency of minority parents to spend money on bottled water rather than turn on the tap, and as well as possible health risks to kids such as the bottled water often lacking fluoride to keep teeth strong or being associated with greater incidence of diarrhea.

“I would argue that people should save their money and drink tap water,” Gorelick told Reuters Health.

Media summaries tended to gloss over the significant socio-economic differences reflected in the study and other telling details.

That’s the kind of rationale Gonzales was searching for when he asked me, “Do they get rusty water or does it have a bad flavor?”

A notable exception to the quick and once-over-easy coverage was MedPage Today. which spelled out the following crucial information:

“Whites, African Americans, and Hispanics made up the study population in roughly equal proportions.

“More than half of the white parents were college educated, compared with 21% of blacks and 17% of Hispanics.

“A total of 44.8% of parents responded that they gave their children exclusively or mostly bottled water.”

For me, those socioeconomic comparisons stand out like blinking neon signs on a moonless desert night. Whites in the survey are better educated and better off financially, thus likely to live in better neighborhoods and healthier housing.

That brought to mind the Blue Cross Blue Shield of Minnesota Foundation study released last fall. Called “The unequal distribution of health in the Twin Cities,” [PDF] the analysis revealed close ties between where a person lived and health and life expectancy.

Drinking your water from the bottle or tap is a matter of choice, acknowledges Stew Thornley, a health educator in the drinking water program at the state Department of Health. Still, he wants to assure folks that our Minnesota water is safe for drinking.

“Tap water is very closely monitored and regulated. They can be assured their water is tested more thoroughly and regulated more closely than water from any other source, including bottled water,” Thornley says. Plus, he says, it costs only a few pennies per 1,000 gallons.