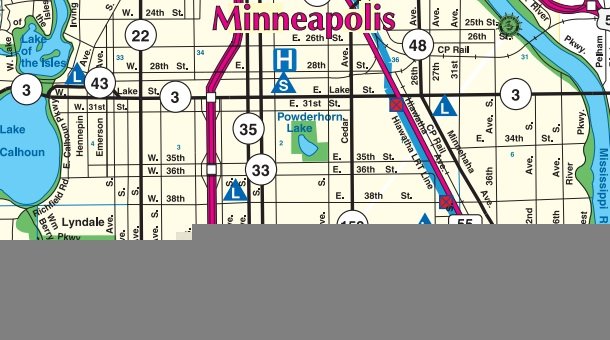 On the map above, the thick black lines with numbers in circles represent county roads in Minneapolis. These are roads that are designed and maintained by Hennepin County and can’t be changed without the OK of the Hennepin County Board of Commissioners, the majority of whom have no constituents in Minneapolis whatsoever. These urban streets are designed by county engineers in rural Medina (pop. 4,892), where they have an office that is west of more than 95% of the residents of the county. None of these engineers takes the bus or train to work, because neither buses nor trains go to Medina. Few, if any, are able to ride a bike or walk to work, because there are neither bikeways nor sidewalks near the department’s office.

Unsurprisingly, not everyone does it this way. In other parts of the country, cities design and maintain their own streets, and county governments focus on taking care of roads in unincorporated areas. If Seattleites wants to implement the best bike plan in the country, the only thing that might stand in their way is other Seattleites. Here’s a map of the the Multnomah County roads in the Portland area. Notice how county roads stop at the city border. Cook County doesn’t do anything inside the city limits of Chicago (yes, I’ve heard that Chicago politics is unsavory; and no, I’m not arguing for a wholesale adoption of their structure). In this map of Austin, the green lines indicate roads maintained by Travis County, and the yellow area is the city. The twain don’t meet. Denver is a city-county, so it retains municipal self-determination. Madison, WI takes care of its own streets, and Dane County’s purview is limited to highways. Hopefully, you’re noticing a pattern by now.

This is all to say we do streets in a weird way, but everyone just seems to accept it. This summer, I was talking to a mayoral candidate about the reconstruction of Washington Avenue in downtown Minneapolis, and the push to calm traffic, install protected bike lanes, and enhance the pedestrian realm. (We won, btw.) He proclaimed that Washington had been designated as an arterial street, and that its purpose was to allow motorized traffic to move quickly. The unspoken second half of that sentence is “at the expense of the suckers who live and play nearby.” Why? When did that happen? Can we revisit the issue?

That candidate lost, thankfully, but his sentiment remains. It’s time we questioned it. What are Minneapolitans gaining by ceding control of major streets to engineers in Medina? Couldn’t we raise the state gas tax to ease the burden of property taxes, as David Levinson suggests? If Seattle, Denver, Chicago, Portland, Austin, and Madison can manage their own streets, I want to hear a good reason why Minneapolis can’t.