In Minnesota, paying for quality childcare has gotten much more difficult since 2003.  Unaffordable childcare and lack of government support means lost time for workers and employers, and increases in the achievement gap for lower-income children. According to the “Status of Women and Girls in Minnesota” report, “Minnesota accredited childcare costs exceed college tuition.”

How are women and girls doing in Minnesota? That’s the question for the 150+ page report issued by the Women’s Foundation of Minnesota and the University of Minnesota Humphrey Institute’s Center on Women and Public Policy. This is one of a series of articles beginning with data and questions from the Status of Women and Girls in Minnesota report.

Because about 75 percent of Minnesota mothers (and 94 percent of dads) work outside the home at least half-time, childcare is an issue for most parents. Accredited childcare is more expensive than “family and friends” childcare, but may also provide increased developmental and educational support. Either kind of childcare is expensive, with the average infant care costing more than $1,000 per month and the average preschool care costing about $800. The graph below (from the Status of Women and Girls in Minnesota report) compares childcare costs with average mortgage and college costs. 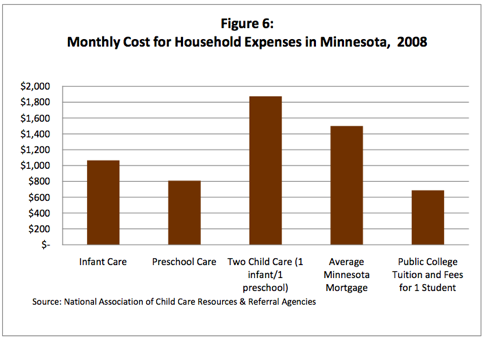 Nearly half of all families with children under 12 rely on family, friends and neighbors for childcare. Another 32 percent use childcare centers and 10 percent use licensed family childcare.

High costs for childcare leave families struggling to patch together some sort of care, and taking whatever they can find. This is true for families at many income levels, but especially true for low-income families, whose children most need quality early educational support.

As recently as the 1990s, Minnesota did a good job in helping families to afford quality childcare. Aviva Breen, who was the director of the Minnesota Commission on the Status of Women from 1983-2001 recalls:

We worked a lot on the whole childcare funding thing. We had absolutely the best program. Our sliding fee childcare program was the best. It never was enough, but it was way better than anyone could have hoped for. Sometimes we actually got rid of the waiting lists! For various periods, we were able to serve everybody who was eligible.

It made a difference in everything. They had good childcare and could work at their jobs and not worry about what was happening to their kids. And then they moved off [welfare]. You don’t need childcare for 20 years.

You are talking about families that need help with their children when they are working at low paying jobs.

Minnesota’s commitment to assisting families with childcare and early childhood education faltered after 2002. In 2003 and again in 2005, the legislature tightened eligibility requirements and increased costs to parents. By 2005, 11,000 fewer children received childcare assistance.  The Minnesota Budget Project reported:

State general fund spending for child care assistance dropped by 26 percent from FY 2000 to FY 2009.Increased federal funding made up for some of the lost dollars, but total federal and state child care spending in Minnesota in FY 2009 is still 16 percent below FY 2000 levels.

Unfortunately, only 19% of low-income Minnesota families received a subsidy, according to the 2004 survey. As of October 2009, 6,600 families were on waiting lists. Many more struggling families do not even qualify. Eligibility requirements set at 47 to 67% of the state median income leave many working-class families, who do not earn a livable wage, behind. “Status of Women and Girls in Minnesota” report.