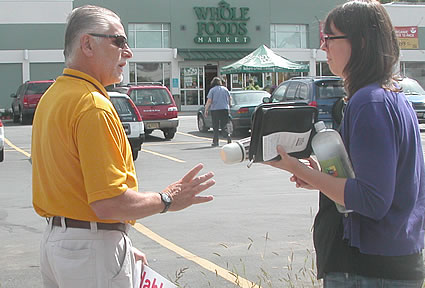 Don Seaquist talks to a customer outside the Whole Foods store in St. Paul. Photo by Michael Moore

The CEO of Whole Foods Market, the world’s largest retailer of natural and organic foods, is against President Obama’s efforts to reform and expand health care insurance. Union activists nationwide are helping John Mackey share that opinion with his store’s millions of socially conscious consumers.

Mackey, Whole Foods’ co-founder and CEO, penned an op-ed piece in the Aug. 12 Wall Street Journal entitled “The Whole Foods Alternative to ObamaCare.” In it, Mackey calls a public health insurance option “the last thing our country needs,” and says it would amount to “a government takeover of our health care system.”

“While all of us empathize with those who are sick, how can we say that all people have more of an intrinsic right to health care than they have to food or shelter?” Mackey asks in the column. “This ‘right’ has never existed in America.”

On Wednesday, Local 789 of the United Food and Commercial Workers pounced on those comments, seizing the opportunity to hold a demonstration in front of Whole Foods’ St. Paul store. Organizers called the demonstration the “launch of a consumer campaign to educate shoppers about Whole Foods CEO’s efforts to undermine health care reform and President Obama.”

“This is about health care and the millions of people who don’t have health care,” Seaquist said. “This isn’t anti-employee. We’ll let the consumer decide what they’re going to do.”

Union activists are not alone in calling out Mackey, however. Almost immediately after the Wall Street Journal published Mackey’s piece, Whole Foods customers began calling on health care supporters to boycott the retailer, and support groups have since sprung up on Facebook, Twitter and throughout the blogosphere.

“There’s been a significant reaction,” Seaquist said. “Maybe that was Mackey’s intent. It certainly has gotten Whole Foods in the news.”