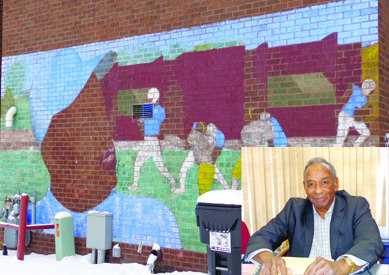 The Jimmy Lee Recreation Center features both a plaque and a mural in his honor. (Photo by Charles Hallman)

Who is Jimmy Lee and why is a St. Paul community center named for him?

“I never met him or knew who he was,” admits Dusty Horton, a Jimmy Lee Center recreation leader. “There’s a mural of him on the back side of the old building, in the parking lot, facing the football [field].”

“Unless you knew him, and knew him as it relates to where he was refereeing, people don’t have the foggiest idea who he was,” says Jim Robinson, a St. Paul-born resident.

Jim “Jimmy” Lee was born in Vicksburg, Mississippi. He later moved to St. Paul at age 23 and got a job with a downtown bank. “He knew everybody by their first name,” recalls Robinson. “He was ‘Mr. First Bank.’”

Lee also was involved in sports. He played on the Uptown Sanitary Shop and the Twin City Colored Gophers, two of the most renowned Black baseball teams at the time, notes Frank White, who is involved in several projects that highlight Black history in the Twin Cities. Lee played for the Colored All Stars (1930) and the St. Paul Monarchs (1932) as well.

“I knew Mr. Lee as a young kid,” says Robinson, “before I was in high school. I knew him in the late ’40s.” Others who remember Lee knew him as someone who officiated football, basketball and baseball games in the area.

Robinson believes Lee was named athletic director of the Hallie Q. Brown Community Center in 1956. His legendary officiating career began in 1955-56 — his name is listed in the alphabetical listing of several St. Paul Officials Directories from those years.

“He was [well] known,” Robinson says. “I don’t know how he got into refereeing, but I do know that he refereed some in every place in this area: St. Paul, Minneapolis, the suburban area, and all of the Upper Midwest. Jimmy Lee was one of the few Black officials who worked a lot of games in the suburban conferences.

“He was known for being the greatest of all referees,” Robinson continues, “and that includes both White and Black officials, both at the football and at the basketball level. He was outstanding as a baseball umpire. Regardless of what sport he worked, everyone wanted Jimmy to work the big game.

“He was the big game official. When they saw Jimmy Lee walk on the floor or on the field, or behind the plate, they knew that everything was in great hands.”

White, who has nominated Lee for the Minnesota State High School League Hall of Fame, points out that Lee also wrote columns for the Minneapolis Spokesman for over a decade, featuring local Black high school, amateur, college and pro athletes. He was earlier inducted into the Minnesota Football Coaches Association Hall of Fame in 1972.

Lee also was very active in his church, says Robinson. “Jim lived on Carroll Avenue in St. Paul, a few blocks from the church he went to, St. Peter Claver. He did all kinds of things.”

Robinson says a petition was signed and presented to the St. Paul City Council to rename the Oxford Playground the Jimmy Lee Rec Center in 1982. It was the first building in the city’s Black community named after a Black resident, he points out.

However, during a recent visit to Oxford Community Complex, this writer found it difficult to locate the name of the Jimmy Lee Recreation Center. There is a small plaque that bears his name just inside the entrance, but visitors can easily walk by without noticing it. When asked, Horton admits that rarely does anyone ask who the center’s namesake is. Some often confuse the late Lee with Robinson, who also works at the center, he adds.

“One little thing that you will find is that there is a thought in St. Paul that Black folk didn’t exist,” Robinson points out, adding that there seems to be an “unwritten law” that no one cares about Black history or the significant contributions of Black people in the city. White, Robinson and others are working to install a plaque with a picture of Lee “that will tell a better story of who Jimmy Lee was in relationship to Minnesota sports history,” says White.

“Everyone liked him,” says Robinson. “I don’t think there was anyone, any place — even coaches and players when they lost — [who] disliked Jimmy… [He was] a wonderful guy who knew how to get along with people and understood people.”

This is the fourth of five stories that will appear during the month of February in recognition of Black History Month describing Frank White’s projects and the historical background behind them. Read last week’s article, Rondo resident’s pioneer athletic efforts recognized, here. Read more on Jimmy Lee and Jim Robinson in this week’s “Another View.”

Next week: The Dred Scott case, its connection to Minnesota, and its impact on U.S. history.