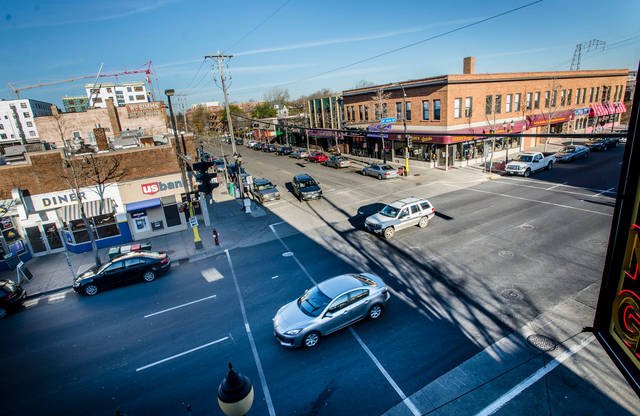 The Dinkytown area is experiencing drastic changes, including the construction of two new apartment complexes. The property owners, though often behind the scenes, are some of the most powerful players in shaping the change. (Photo by Amanda Snyder)

When University of Minnesota students returned to campus this fall, half a block of Dinkytown was gone.

That site will house a six-story apartment complex next year. Across the street, another student housing project is already under construction. Doran Companies has proposed yet another development in the heart of Dinkytown.

As the neighborhood faces some of the most drastic changes in its history, the community is divided over preserving character or restoring vitality.

But heated discussions have often left out those with the most tangible power — the people who actually own the land.

Often faceless and sometimes entire states away, these property owners ultimately decide which tenants fill the area’s storefronts and who can buy Dinkytown real estate.

More than half of Dinkytown property owners surveyed by the Minnesota Daily said they’ve been approached by a developer interested in their land. Of Dinkytown’s 25 property owners, eight declined to participate in this story or didn’t respond to repeated interview requests.

Developers have been nosing around for decades, said Gary Eidson, co-owner of three Dinkytown properties since 1990, but he’s noticed keener interest in the last five years.

Steps from the University and bursting with businesses, Dinkytown is an ideal backdrop for complexes that address a pent-up demand for housing close to campus.

Minneapolis principal planner Haila Maze said the City Council is eager to see those kinds of projects built. Its approval of two Dinkytown projects and denial of a proposed freeze on development speaks to that, she said.

“The cannons have come around to your side,” Bilotta said at a meeting of Dinkytown business owners last month.

About half of the buildings in Dinkytown were built before 1930.

Frank Vescio’s roots date back to 1956, when his father first opened the family’s Italian restaurant.

Today, Vescio is one of Dinkytown’s last “lifers.” He’s watched the area change from a mom-and-pop shop hub to the bustling entertainment district it is today.

Vescio, a University alumnus and perennial men’s hockey season-ticket holder, said countless sports figures have come through his restaurant over the years.

In the ’80s, former Minnesota Twin and World Series MVP Frank Viola ate at Vescio’s the day before each game of a record-breaking winning streak, earning the restaurant a shout-out in Sports Illustrated.

While he’s collected 57 years worth of warm memories, Vescio said the future of his family’s long-standing eatery will fall to his children.

Just down the block, Roland “Rolly” Reidhead is debating the fate of his own 108-year-old building. He’s not actively looking to sell, but he said the offers that come in every couple of months are getting harder to refuse.

Reidhead said the building housing Gold Country Apparel has been in his family for five generations. During his time at the University, he lived in the building’s second-floor apartments.

But the building has worn down over time, he said, and could benefit from reinvestment.

“The developers have that ability,” Reidhead said. “They can invest long term and show the returns. My belief is that they are not going to hurt the area, but help the area.”

Reidhead said he understands the controversy over the apartment buildings under construction nearby.

Laurel Bauer ended her family’s 80-year Dinkytown history when she sold the House of Hanson grocery store and other properties for $4.27 million.

And Jeffrey Meyers signed an agreement with Doran Companies to sell the building housing Mesa Pizza, Dinkytown Tattoo and Camdi Restaurant. When he was 12, Meyers began working in the building at his father’s barbershop.

Bauer, Schaak and Meyers are a few who have ended their Dinkytown lineage.

Meyers said his family’s history didn’t factor into the decision to sell.

“It’s business,” he said. “[My parents] definitely thought I should sell, also.”

Over his 25 years in Dinkytown, Meyers said the area has lost its character. Interest from developers is a chance for the area to get a facelift, he said.

“A lot of [family businesses] have been gone for a long time — including my father’s,” he said. “I don’t think there’s any charm. … Dinkytown needs a shot of adrenaline.”

Bauer said she struck a deal with developer Opus Group after turning down countless other offers during her 17 years as a property owner.

Three years ago, Bauer said she “absolutely” wouldn’t consider leaving Dinkytown. But when a new CVS Pharmacy opened and a nearby building was razed, House of Hanson lost customers.

“It was just getting more and more difficult to keep my doors open,” Bauer said.

Bauer got her first job behind those doors 44 years ago, opening pop bottles and putting out candy under her grandmother’s watchful eye.

She only recently stopped crying when she passes the site where House of Hanson used to be, she said.

Bauer said she knew she’d be the last in her family to run the grocery store.

“It would have been a much more difficult decision to sell if my children were interested in running [it],” she said.

In the past, Dinkytown property was passed down through generations, said longtime property owner Irv Hershkovitz, who owns Dinkytown Wine and Spirits.

“I think some of the generations now would rather take the money and do something else with it,” he said.

The race for Dinkytown property isn’t limited to developers — a handful of existing property owners are always looking to invest more in the area.

Wally Sakallah, owner of Wally’s Falafel and Hummus, is well established in Dinkytown. Last week, he signed a purchase agreement to buy the building that houses his Hideaway head shop.

It wasn’t the first time he’s bought the building leased by one of his businesses. He purchased his own restaurant’s building to halt development last year.

But Sakallah said he doesn’t blame other property owners for selling their land to developers. He said he knew one Dinkytown property owner who was offered $2.2 million for land he bought for $600,000.

“He would be stupid if he said no,” Sakallah said.

Hershkovitz said that sort of buying power makes it hard for locals like him and Sakallah to compete.

“It’s almost impossible to buy property in Dinkytown anymore because of all the developers,” he said. “We can’t cash flow it.”

For McLean, improving an area he loved didn’t mean razing a century-old building.

The words “Gray’s Drugs” still wrap around the exterior of the restaurant, a remnant of the pharmacy that operated there for 50 years. “Grodnik” — the name of the building’s original owners in 1902 — is still etched above the doorway.

“My approach is to appreciate what’s there and work with it and highlight its assets,” McLean said.

He’s skeptical of new projects that ignore the area’s culture and rich history and said more conscientious redevelopments like his can strengthen Dinkytown.

“That, I believe, is a big contributor of the construction of a meaningful community,” he said, “places where people know that other lives have come and gone and passed through.”

One of Dinkytown’s oldest buildings is an oft-overlooked 113-year-old duplex tucked between Varsity Theater and the Purple Onion Café.

Tim Harmsen, who owns Dinkytown Rentals and its 700 campus-area dwellings including the duplex, is one of numerous property owners calling for the area to be redeveloped and modernized. Harmsen and others say redevelopment will knock a second wind into an area that’s been wheezing for some time.

“If something doesn’t change, it’s not going to survive,” he said. “What’s the point of having Dinkytown with the old buildings if they’re all vacant?”

Steve Young, owner of the building housing Bruegger’s Bagels, said it’s well known that Dinkytown has been “run-down” for many years.

“Stadium Village has attracted the bulk of activity and life,” he said, “so I’m encouraged that there is new investment [in Dinkytown].”

Young has been a real estate investor in Minneapolis since the late 1990s. He said change, while hard to swallow, is a necessary remedy.

“No one wants a building falling down. No one wants things to look unkempt or old,” said Greg Pillsbury, owner of Burrito Loco and its property since 2002. “But at the same time, we don’t want to be a four-block area full of high-rise apartment buildings.”

He said the area must strike a delicate balance between profiting from hundreds of new residents and preserving the mix of businesses in Dinkytown.

“This is an area where two guys can open a burrito shop who don’t have a million dollars,” he said. “This is a place where some girl can open a cupcake store by taking out a small loan.”

Sweeping changes to the area have left some property owners feeling unrepresented and uninformed.

In the past, the people behind Dinkytown had little visibility in the area, said Meyers, owner of the property housing Mesa Pizza.

“We haven’t really had much of a voice at all,” he said.

Doran Companies CEO Kelly Doran, who owns Sydney Hall and Dinkydome, has spearheaded a new coalition of Dinkytown property owners trying to close gaps in communication and representation. They hope to give the property owners a united voice in how Dinkytown should change.

A majority of the Dinkytown Business Association’s 69 members are retail tenants, DBA President Skott Johnson said. Only six or seven are property owners.

“It became abundantly clear to me that a lot of the property owners were not in the loop,” Doran said. “There was an assumption that the DBA was the voice for all the business people in the area, including property owners, and we discovered that’s not necessarily true.”

It’s difficult and costly for city officials to reach out to every property owner, she said, especially those who are out of state or rarely in Dinkytown.

“We really do depend on the various community networks to get the word out,” she said.

The property owner group has met a handful of times with city and neighborhood officials to discuss the small-area plan, historical preservation and future development.

The group hasn’t decided whether it will form an official coalition, but a five-member committee has begun work on pinpointing common concerns of property owners.

Johnson said he thinks both groups share similar concerns. He said in the past, he has welcomed property owners who reached out to him to the group and its email list.

“I really don’t hear, up until now, that they don’t feel represented,” he said.

Eidson, who owns multiple Dinkytown properties, said the collective voice of the property owners should carry the most weight in discussions of Dinkytown’s future.

“Certainly, tenants should weigh in,” he said, “but we’ll be in the neighborhood before those tenants and after those tenants.

“We want to make sure that the opportunity to continue responsible development in the neighborhood can occur.”

Doran said he thinks the climate needs to better reflect just how important property owners are to the area.

“I think the property owners have a longer-term perspective in mind than some of the business owners who are there on short-term leases,” he said. “The value of the real estate far outweighs the values of the businesses.”