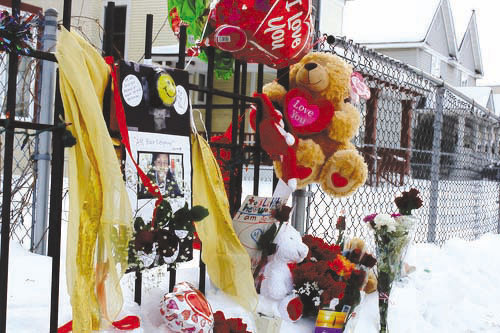 Nineteen-year-old Walter Lee Dolley of Minneapolis was shot on a sidewalk in the 3400 block of Chicago Avenue around 11 p.m. on Jan. 8. He died from multiple gun shot wounds, but why he was targeted is still under investigation.

This block has known tragedy before. It is the block where Tyesha Edwards was murdered in November of 2002. A stray bullet from a gunfight between Bloods and Crips on Chicago Avenue went through the wall of her home where she was sitting at the dining room table doing her homework with her little sister Lakia. The bullet hit Tyesha’s heart. She collapsed and died almost instantly.

Myon Burrell, 16, and a Rolling 30s Bloods member at the time, was convicted of that crime.

In 2006 Southside Pride reported: “On July 4, a man, later identified as Preston Bobo, 19, threatened Louis Gates that he was in gang territory at 35th Street and Chicago Avenue. (Bobo is a member of the Rolling 30s Bloods street gang). Gates, frightened, phoned his friend Joseph Rogers to pick him up. Rogers arrived and went to speak with Bobo, who was an acquaintance. Shortly after, Gates watched Bobo shoot Rogers, who died in Toni’s Market & Deli after crawling there for help.”

Last year the Metro Gang Strike Force (MGSF), in one of its last acts before falling from grace, put away most of the members of the Rolling 30s Bloods on conspiracy to distribute drugs charges. The gang had claimed turf on Chicago Avenue from Lake Street to 38th Street. And things seemed much more calm on Chicago Avenue last summer. There was very little street dealing of drugs and very little prostitution.

For years abandoned storefronts on the 3400 block have acted like welcome mats to gang violence and disrespect. Last summer, due to the dogged determination of the Powderhorn Park Neighborhood Association and Council Member Elizabeth Glidden, some of those buildings were torn down and now the property at 3405 has been purchased and renovation has begun to turn it into South City Café, slated to open expanded his needlework business into the newly renovated space. David Nuñez has made a serious commitment to the neighborhood with renovations of his El Plebe restaurant at 3200 Chicago. It seemed like the neighborhood was moving forward.

Here are some questions I asked Captain Amelia Huffman, Minneapolis Police Department Criminal Investigations Division: “Is the MPD considering the possibility that this is a gang/drug related killing, and does the MPD have adequate resources to investigate gangs in South Minneapolis after the disbandment of the Metro Gang Strike Force?”

Captain Huffman replied: “We always look at the possibility of gang/drug/robbery/other ‘crime related incident gone bad’ scenarios unless it’s clear that there is another motive at work-a domestic related murder, for example. This case is no exception. Across several investigative specialties and among staff at the precinct, we keep an eye on what may be Bloods related activity in this neighborhood, which, historically, has been troubled by crimes committed by members and affiliates of the Bloods.

“MPD has never relied solely upon the MGSF for investigation of gang related crimes. Investigators in homicide, robbery, assault and the juvenile units all work gang related crime cases and develop expertise in the area. The Violent Offender Task Force handles major, long-term investigations involving violent criminal enterprise-often the higher ranks/major players affiliated with gangs. The Gang Enforcement Team works on street level enforcement and interdiction of known, active gang members and in areas of hotspot activity. Officers with the Special Operations Division provide additional street level patrol in focus zones based upon recent violent activity and/or anticipated activity. Precinct patrol officers, directed patrol teams and community response teams are the folks on the ground day in and day out working with neighborhood groups, taking ongoing enforcement action and conducting high visibility patrols. None of these resources is dependent upon the MGSF.”

Inspector Lucy Gerold, who grew up in the Powderhorn neighborhood and now lives in Seward, said, “A homicide is a very traumatic event for a neighborhood. I know this personally because the triple homicide at the Seward Market happened four blocks from my house.

“There will not be beat cops walking the neighborhood. Cops on foot work best in very dense areas and have less impact in low-density neighborhoods; we can better use our resources on the problem properties and suspects.

“I would encourage people to walk in the neighborhood. One of the most successful ways of making a neighborhood feel safe is for neighbors to rally in support of one another and be out on the streets and in the neighborhood. Seward rallied strongly with an outpouring of support, unity and signs. “We continue to focus on Powderhorn and Central, with prevention, investigative and enforcement resources.”

Who was Walter Dolley? According to Council Member Elizabeth Glidden: “Walter Dolley, only 19 years old, lived in Powderhorn and was involved in the community, particularly at Mt. Olive since he was in 3rd grade. He worked at a local daycare. He was involved in after school job programming. I’ve heard him described as a very outgoing, friendly and engaging young man. His death is a huge loss to the community, and to his friends, classmates, teachers and family. There are people out there who know who killed Walter Dolley.”

Sgt. William J. Palmer, who is heading up the investigation, encourages anyone with information about the crime to call the TIPS Line at 612-692-TIPS (8477).
In the meantime, the neighborhood wants to move forward. There’s talk about painting the intersection, and Council Member Glidden is very supportive: “I have been seeking for some time an 8th Ward neighborhood/block that is interested in Intersection Repair (painting on the street) and Jill [Jill Boldenow of Powderhorn with nine years experience at the Weisman Art Museum] is in a perfect place as Arts Commissioner to help lead on this initiative. Some existing examples of Intersection Repair/street painting are in St. Paul and there was at least one project that happened in North Minneapolis.”

For more information on this and other activities in the neighborhood check out mpls-poho@forums.e-democracy.org.