Over the summer, Connected Nation spoke with more than 12,000 residents across ten states (including Minnesota) to inquire about their adoption and use of broadband service. Over the next few weeks, they will be releasing more data from the reports, but this week we get a sneak preview that focuses on adoption in low-income households with children…

They have a table that highlights some of the data on why low-income households don’t have broadband. 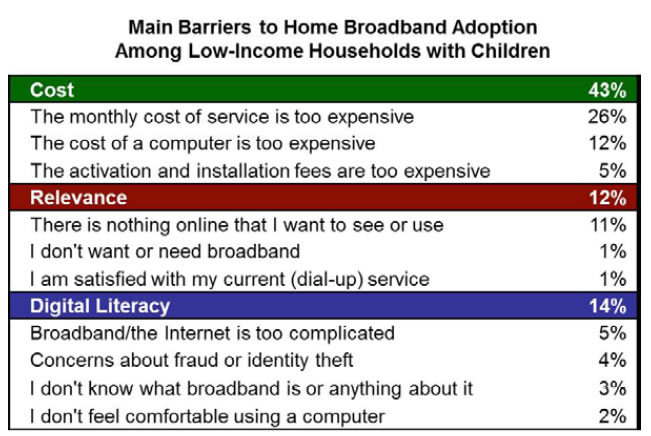 Lack of access wasn’t called out as a reason. I know when Jack Geller surveyed Minnesota residents about access that lack of access did come up – however, Jack’s last report focused on MIRC (Minnesota Intelligent Rural Communities) residents – areas that received ARRA funding to increase broadband – and the Connected Nation surveys were broader in scope.

I spoke to folks at Connected Nation and it sounds like the issue of access may come  up in a future report. I’ll look forward to seeing it. In the meantime it is interesting to see that cost is the overwhelming issue. I wonder if access via handheld devices will change that.