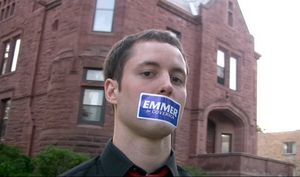 Back in November, a news tip led me to the steps of the state capitol, where I taped a speech by Robert Erickson, a young man from Minneapolis concerned about immigration issues.

Since November, I’ve kept in touch with the activist, who has recently captured the attention of the left and right following a his march with the Emmer for Governor unit in St. Paul’s Cinco de Mayo parade.

Erickson, who does not appear to caucus with any party, stirred the spleen of GOP activist and former candidate Bill Jungbauer and NARN blogger Mitch Berg, both of whom appear to have mistaken Mr. Erickson for a Democrat.

As far as I can discern from this video captured at the 331 Club Thursday night, Mr. Erickson does not share their confusion about his ideology:

Jungbauer and Berg’s reaction caught the discerning eye of Phoenix Woman at FireDogLake. She called Erickson a “sublime satirist”:

And then there’s the downright hilarious methods of Robert Erickson, who seems to be channelling Stephen Colbert and the late lamented Ladies Against Women in terms of holding up a mirror to his right-wing targets so they can get a nice, long look at what they’re espousing.

This is the young man who first shot to local fame when he dared to punk a Tea Party gathering at the State Capitol last November posing as an anti-illegal-European-immigrant activist. (The full story is here.) His latest tweaking of Republican bigotry came during St. Paul’s Cinco de Mayo Parade, when he infiltrated the group of Republicans marching in support of Tom Emmer, who is the Republican endorsed candidate for governor. The small handwritten sign he’s holding reads “Emmer, show us your papers!” in Spanish – a joke that none of the Emmer people got but had the Latinos along the parade route in stitches.

The only things funnier than his videos are the labored attempts of local conservatives to twist themselves into pretzels in their efforts to avoid getting the joke. Here’s a piece of particularly lame hissy kabuki from Bill Jungbauer, who just happens to be the really obnoxious guy who shows up at around 2:50 into the video. (He’s also prominent in the St. Paul GOP. You’d think Republicans could weed out the dingbats; instead, they make them vice chairs.) For some reason, he thinks – or wants his readers to think – that Erickson was put up to this by one of the Democratic candidates. Ah, would that this were so; they’re all far too Minnesota Nice to do such a fabulous thing. Meanwhile, local agent proschlockateur and “street theater” connoisseur Mitch Berg, seething with envy over not having thought of something half this clever, goes into Innocence Abused Mode.

Here’s a video of that event:

When your candidate for governor proclaims Arizona’s new anti-immigrant law “a wonderful first step,” and you then show up at St. Paul’s Cinco de Mayo celebration, it’s fair to say you’re asking for an argument.

Tom Emmer’s supporters got just that on Sunday in St. Paul, when immigrant-rights activists marched and chanted alongside them during the event’s parade.

So far, so predictable. But then along comes Robert Erickson, street-theater prankster. With a video camera rolling, he quietly and respectfully joins the Emmer procession with a placard. Then, he pulls out a handmade sign saying, “Emmer, dame tus papeles” or, “Emmer, show me your papers”.