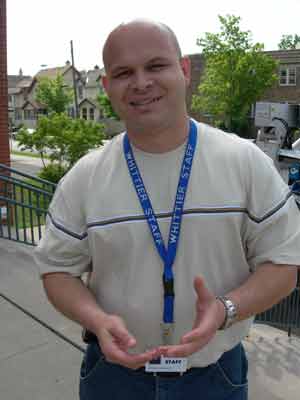 On Friday, May 26, 2006, the Whittier Community School of the Arts officially changed its name to Whittier International Elementary School. The new designation was actually finalized last fall when the students at the school came up with six possible names and then decided, by means of a student vote, on their school’s new moniker. The change in name accompanies a more fundamental curriculum shift: in 2005 the school entered the International Baccalaureate Primary Years Program (IB-PYP).

To celebrate its new IB identity, the school held a series of fun, outdoors activities on what turned out to be a beautiful summery Friday. There was a demonstration by the Third Lair skateboard club, a track and field competition (complete with potato sack races—which, by the way, are a lot of fun to watch) and finally, at 11:10 a.m., there was a school sing-along while a banner bearing the new name was unfurled on the south side of the school building.

I spoke with principal Armando Camacho about the significance of the day. According to Armando, the school was started in 1996 as a neighborhood arts school with strong ties to the Jungle Theater, Macphail Center for Music, the MIA and the Children’s Theatre. Three years ago, however, enrollment was in decline (only 282 spots filled out of a 525 capacity) so something needed to change. The solution was to become Minneapolis’ second International Baccalaureate elementary school.

But what exactly is the International Baccalaureate Primary Years Program? According to the school’s website (http://whittier.mpls.k12.mn.us/IB.html), the IB-PYP is founded on six guiding principles: Where We are in Place and Time, Sharing the Planet, How We Express Ourselves (visual elements), How We Express Ourselves (tales of courage), How the World Works and Who We Are. Each grade level (beginning with “high five” or pre-Kindergarten) focuses on a particular tenet, and the curriculum is filtered through that lens. But, Armando is quick to point out, “the community was very vocal about keeping a strong arts program, and we’ve done that.” Plus, the international flavor of the program seems to work well in a school located in the heart of Minneapolis’ most multicultural neighborhood.

One other positive attribute of this fundamental shift is that students can now enroll from a larger quadrant within Minneapolis. According to Armando, the new attendance boundaries allow students from anywhere in Minneapolis south of I-94 to enroll. Obviously, this has increased enrollment opportunities for students—this year the school boasted the third most-selected kindergarten in the Twin Cities.

At 11:10 a.m. a bullhorn called the students away from their potato sack races and everyone gathered near the building to watch the unveiling of the banner. As the 10 by 12 foot signage slowly unfurled, the students sang a special song written for the day that went: “Hey, Hey waddya say, come and celebrate our new name! Happy happy day, happy happy day. Yeah, yeah, yeah.” Yeah…happy day.