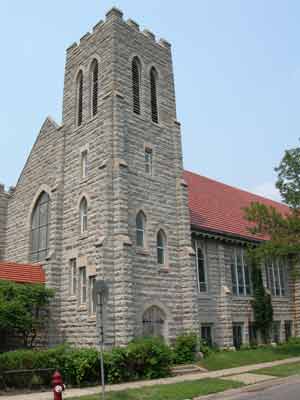 For over a century, Salem Lutheran Church has been a fixture at Lyndale and 28th near the southwest corner of Whittier. It has played various roles in the neighborhood throughout the years—currently it functions as a place of worship, youth center and theater space. And visually, it’s hard to imagine the corner of Lyndale and 28th without the imposing, Gothic structure sitting there stoically as it has done for so many years.

So when plans surfaced that the Salem-Lutheran Congregation was planning on demolishing the building and putting up 42 housing units plus retail space in its place, the public outcry was swift.

I happened to be at the March Whittier Community Issues Meeting where a church representative first made the demolition plans known (at least in such a public forum). By the end of the meeting, a task force had already formed to learn more about the situation and determine if there was any way to save the structure. Three months later, a lot more is known about the situation, though what will happen next depends on events that are soon to transpire.

I recently caught up with Scott Smith, a member of the Salem-Lutheran task force. According to Smith, the reason there was such a public outcry over the proposed demolition was, “the plan demolished an historic building, and the plan added affordable rental units to Whittier which is inconsistent with the Whittier NRP housing plan.” So, one of the first things the task force did was analyze the monetary feasibility of saving the building.

According to Smith, “The staff report from the Heritage Preservation Commission was just released and it finds that the building can be preserved and prepared for reuse for less than the proposed cost of demolition and the proposed development.” That is good news for the preservation effort. The task force also arranged for, “Robert Mack, a local architect who teaches at the University of Minnesota and who is affiliated with Partners for Sacred Spaces, walk through the site,” presumably as a means of generating more historical interest in the church.

And Salem-Lutheran is an interesting piece of historical architecture. According to the Heritage Preservation Commission staff report, Salem-Lutheran is a Gothic Revival style edifice that was “one of the first Lutheran congregations west of Chicago to worship in the English language.” The report also states that, “The first church to stand on this site was a wood-frame structure constructed by the congregation in 1889 and expanded in 1900. The current building dates to 1904.” The report continues, “The oldest part of the existing church was designed by noted Minneapolis architect Adam Lansing Dorr and constructed by Picket and Cook for an estimated cost of $25,000.” Two crenellated bell towers, beautiful stained glass windows and a basement black box theater space round out Salem’s unique look.

The Heritage Preservation Commission held a public hearing June 27 and will issue a recommendation regarding what steps ought to be taken next.

If you would like to get involved in efforts to save this old building please contact the Whittier Alliance at 612 871-7756.